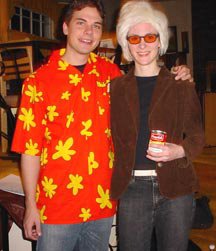 Some of daughter #2's high school friends were throwing a Halloween party so daughter #2 and her boyfriend hopped on a train in the city after work and arrived here before eight. Then they dressed as Quagmire and Andy Warhol. I had no idea who Quagmire was since I watch very little television. We did not have a can of Campbell's Tomato Soup in the house, and so daughter #2 had to substitute a can of Campbell's Low Sodium Chicken to complete her outfit.

Daughter #2 told me one of her other friends dressed as Abe Lincoln and another--a rather large fellow--claimed to be a Chippendale dancer with the white cuffs, but no shirt, the bowtie with a collar and money in his belt. She said there were a lot of zombies, some witches, and a nurse. Someone else was Professor Snape and one came as an anchorman in a suit. There was a devil along with Jack, the Pumpkin King. Mary Poppins showed up. And one fellow came in a white lab coat and carried a toy chainsaw. Quite a variety.

They played games, too. There was a doughnut eating contest. Professor Snape won.

That brings back memories