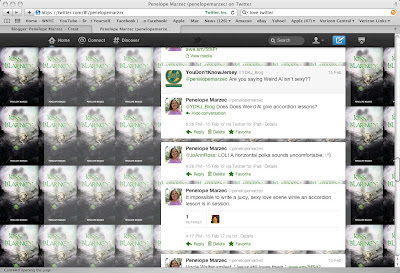 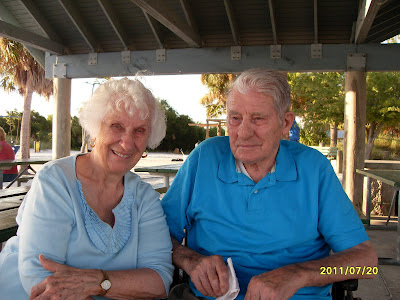 This is a photo of Babci and Dziadzi taken last July. Dziadzi looks good for a 94 year old. At Dziadzi's wake, Babci wanted photos taken of her husband in the coffin. I handed my camera to hubby and he took the pictures his mother wanted.

Evidently, taking post mortem photos is an old tradition in hubby's family. The photos are always sent to the remaining relatives in Poland. Personally, I like to remember the way people look when they are alive. However, taking photos of the dead was quite popular during the Victorian Era. Check out this link on Wikipedia.

We have plenty of photos of Dziadzi when he was hale and hearty, as a handsome young man, as a playful grandfather, and in a thoughtful mood. He was a good man. 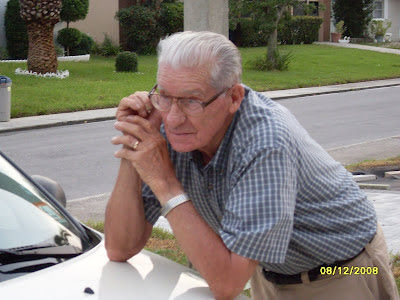 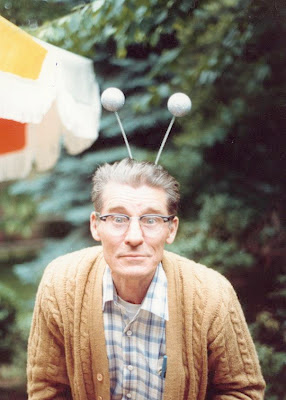 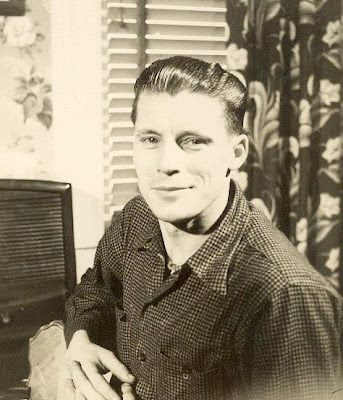 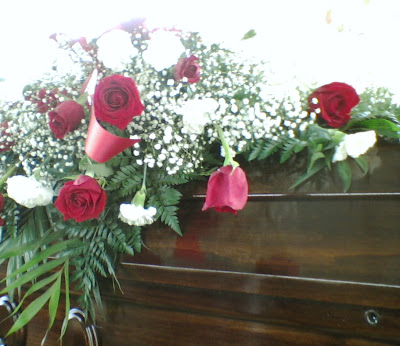 Death comes to us all. To some it comes sooner and to some, later. Dziadzi, hubby's father, was lucky enough to live a long, long time. He died four days short of his 95th birthday. He did not "go gentle into that good night." He suffered for the last few years. Though his death was expected, it was still sad, especially for Babci, his wife of 71 years--hubby's mom.

Dziadzi means grandfather in Polish. Dziadzi came to this country when he was twenty. Three years later, he met his true love at a small party and married her four months later. They had two children. One of them being my hubby. Hubby's brother passed away several years ago so his parents have relied solely on hubby's help in their difficulties.

Since Babci and Dziadzi lived in Florida and everyone else in the family lives up north, Dziadzi's passing created a logistical nightmare. As soon as we received the news, hubby booked a flight, a hotel, and a rental car. He sent all the information to the rest of the family via email and called as many as he could.

We headed to Florida the next day, arriving late in the evening. The following day was spent scrambling around to make funeral arrangements. The rest of the family arrived in time for the wake. In addition to the family, many of the friends hubby's parents made while living in Florida came to talk about the good times. It's rather sad that it takes a death in the family for us to hold a reunion, but it was nice to see everyone nevertheless. We were so glad that everyone was able to be there for Babci. It truly lightened the sadness in her heart.

Babci held up well during the whole ordeal, probably because she had seen Dziadzi suffer so much for the past few years that his passing was a relief. She is smaller though, a shrunken version of the energetic woman who could dance every Polka at the Polish club where nobody could keep up with her.

The funeral was lovely, dignified, and comforting. The priest's homily was truly inspired. The hymns were old favorites and included a Polish Christmas carol.

The repast may have been a little crazy--we settled for the Golden Corral--but everyone had their choice of food. It just so happens that the Golden Corral was one of Dziadzi's favorite places as well as Babci's favorite, too. I can remember Dziadzi's joy at having the wide variety of desserts. He did not eat much of the meat and vegetables but he satisfied his sweet tooth.

Most of the grandchildren left the day after the funeral, although Daughter #3 and her hunny spent an extra day during which we occupied Babci by taking her on a cruise on the Miss Daisy to check out the stilt houses in the Gulf and watch the dolphins cavort around the boat. The weather was glorious and the dolphins' antics brought Babci a smile.

Monday came and the real work began. Hubby and I took Babci to the Social Security office and the bank. We wrote out thank you cards. By Tuesday, we waded in papers searching for insurance policies and bank statements. While Babci never throws anything out, it wasn't in any discernible order.

We aren't finished with the paper tasks. It will take some time to settle everything properly. In the meantime, we will be searching for an assisted living facility close to our home. We intend to move Babci up north with the rest of the family. Florida is a great place to be if you hate winter, but it is too far when you are old and feeble.

Hubby and I left sunny Florida and flew home to snowy New Jersey, but the snow was light and fluffy, covering the branches and lending the landscape the look of an enchanting winter wonderland.