Our Trip to Gettysburg 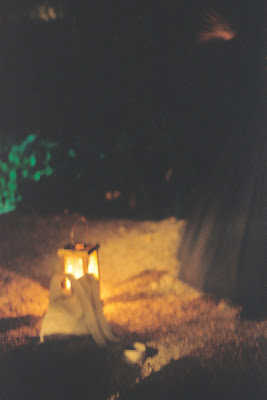 Do you see any ghosts in this photo? I don't. Hubby and I drove to Gettysburg, Pennsylvania, for a mini-vacation. Hubby had never been there. I was there once as a child, but things have changed. There were no ghost tours available when I last visited Gettysburg. Now there are ghost tours everywhere! I wasted several shots trying to capture an image of some spectral being. Still, I did enjoy our one ghost tour. In fact, I would have liked to try a few more since I did not get any spooky feelings on the ghost tour. However, I did experience a creepy sensation when we visited the basement of the Jennie Wade house. 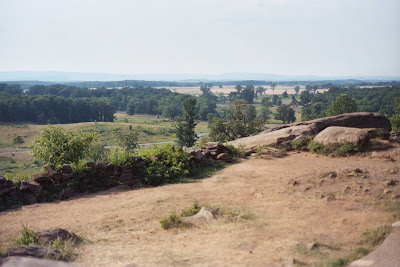 This is a view from Little Round Top where one of the battles in Gettysburg took place. It is interesting to note that reenactors are not allowed to use the actual battlefields. Hubby and I learned a lot from the tour guides. We found the park's rangers to be very knowledgeable and interesting. But it is depressing to consider the massive loss of life that occurred in the three days of battles at Gettysburg. Some bodies were never identified. 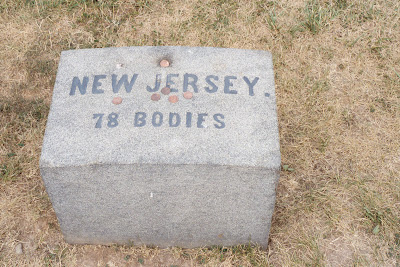 I found several books written about women's experiences during the Civil War. I bought three of them--just in case I might want to write a romance using that time period as a setting. I'm always thinking about writing!
Posted by Penelope Marzec at 7/26/2007 01:25:00 PM 3 comments:

Hubby and I went to the theater and saw Ratatouille. We both thought it was great! There was plenty of action for hubby and a little romance for me. Daughter #2 had recommended it to us.

When I got home I began to look for ratatouille recipes in my cookbooks--I have way too many cookbooks. I discovered that in each cookbook there was something slightly different. So I put together my own recipe.

1. In 2 tablespoons of the oil, saute onions and garlic until they are golden. Remove from the pot.

2. In a large 8 quart heavy pot, combine the ingredients in layers--except for the Parmesan--that goes on top. (I had three layers.)

3. Simmer, covered, for 45 minutes. Uncover and continue to heat for 10 minutes longer to reduce the liquid.

A Night Out With The Band 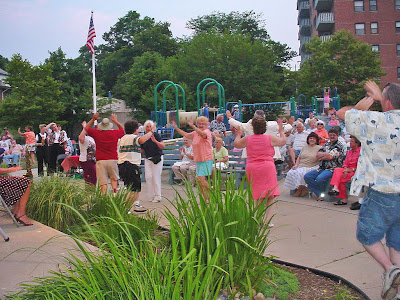 Last night the Happy Days String Band played an outdoor gig. Listening to music with the breeze blowing in from the bay in the summertime is such a treat. I took some photos. The one here makes me laugh. At one point in the program, the captain of the strutters demonstrated how to strut. Then the audience was asked to try it--and some people were brave enough to get up and dance around. The band sometimes ropes in new strutters with this technique.

And after all, who wouldn't want to dress up in feathers and sequins so you could look like this? 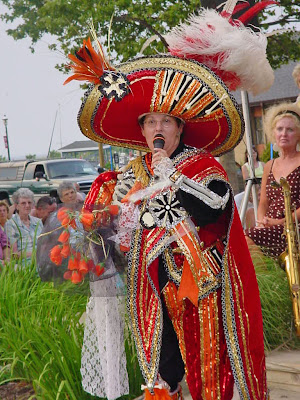 Yesterday one of Daughter #3's guinea pigs, Leenda, appeared to have difficulty breathing. After rushing it to the vet, our daughter learned that the guinea pig's digestive system was paralyzed. Daughter #3 decided to have her pet put to sleep. Leenda was old--for a guinea pig.

Hubby got out the post hole digger and we had a brief, but sad funeral for Leenda. We bought some perennials and planted them over her little grave. Guinea pigs are such sweet pets. It's hard when they must leave us.
Posted by Penelope Marzec at 7/10/2007 07:34:00 PM 2 comments: