I just received a wonderful review for A Rush of Light from Janet at Fallen Angel Reviews! She said, "A Rush of Light is an excellent book when you are looking for something more in a story."

Here it is! This is the cover for Kiss of Blarney which will be released by New Concepts Publishing on February 17th. It is not exactly what I expected. Hubby nearly keeled over when he saw it. "So that's why you wanted to go to the Poconos!" he said.
:^)

I wish we had a transporter like the one on the original Star Trek show. It would make life so much simpler.

Yesterday, I had to drive down to south Jersey and pick up Daughter #3. Her car is getting some major repairs, but she had an appointment today. Normally, it's a three hour run on the Parkway to pick her up and return. I knew I would not be able to write, but at least I could "read." I borrowed a book on CDs from the library--Linda Howard's Now You See Her. I had a great time listening to the story as I drove.

Daughter #3 was right on time and almost packed when I arrived--but she was hungry. We decided to stop halfway up the Parkway at the rest area for a burger supper. However, as we got onto the Parkway, the car made some odd noises and lurched a bit. I pulled over and Daughter #3 checked to see if the car had gotten stuck between two and four wheel drive. It did not seem that it had, but the car ran okay after that--though I drove much slower than usual on the Parkway. It lurched a few more times, but not badly.

We stopped to eat and check out all the car's bodily fluids. The antifreeze was almost gone, but the oil and transmission fluid levels were fine. We added antifreeze and Poland Spring water which I had brought along for us to drink. Then we continued north. The car got worse. Finally, we decided we would get off the Parkway and drive along the back roads, but the car acted up even at a very slow speed.

We pulled into a Rite Aid pharmacy lot and called a towtruck. An hour later, we were sitting in the cab of the towtruck and heading home with my car on the flatbed. Daughter #3 noticed that the towtruck operator wore Magnum boots. She whispered to me that they were serious boots--and Daughter #3 would know that detail.

We got to talking and discovered that the operator of the towtruck was quite an interesting character. He has a side business. He repossesses cars. He boasted about his other truck--the one with the 3" Lexane glass and a joy stick. He can back up to a car and drag it away without ever leaving the cab of his truck. I'm going to have to put a guy like him in one of my books.

The most interesting part of our adventure came at the end. Before we parted, the towtruck operator gave his phone number to Daughter #3. Hmmm.

The Rock of Gibraltar

Hubby dubbed his kidney stone the Rock of Gibraltar. It was smaller than a peppercorn. However, it was analyzed and turned out to be the most common type made up of calcium oxalate. According to the doctor, hubby should now avoid foods with a high percentage of oxalates--such as spinach, most berries, and draft beer (bottled beer is okay). Actually, the list of foods to avoid is rather long but there are plenty of things on that list that hubby never eats anyway such as fruit cake, grits, rutabagas, okra, and beets.

The most important suggestion is for hubby to drink water. Hubby has never been overly fond of water. When he gets thirsty, he drinks soda. This past year I have introduced him to flavored seltzer which he finds palatable, but his favorite soda at the moment is Mountain Dew Code Red. :^(
Posted by Penelope Marzec at 1/23/2006 08:54:00 PM 3 comments:

Today I have a rotten, nasty head cold. It started yesterday with a sore throat. I did not go to the romance writers' meeting this morning. :^(

I am drinking plenty of hot liquids since I surfed the net and found Grandmother Knew Best. I am following the advice in the article. Fortunately, I like tea.
Posted by Penelope Marzec at 1/21/2006 06:16:00 PM 1 comment:

Tomorrow is the day A Rush of Light will be released at Awe-Struck E-Books. Today, a wonderful review from Sherree Chmitlin went live at Romance Junkies. No matter how many books I have gotten published, it is still a thrill to get a good review. Sherree said, "RUSH OF LIGHT was a great book and I absolutely enjoyed reading it."

Smoothing Out the Rough Spots

Last week, over the course of seven days, I wrote twenty-eight pages. I know I am capable of writing more than that in a week, but that's what I accumulated due to a variety of distractions. This week, I'm filling in the holes--working backward and forward and smoothing out the rough spots. I'm also blending in some details and that will add a few more pages. Not every writer works this way, but this is the method that is comfortable for me. 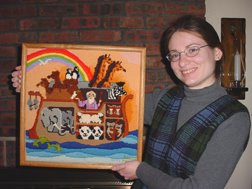 Back in 1999, Daughter #1 worked as in intern at Mote Marine Laboratory in Sarasota, Florida. In her free time that summer, she began stitching a needlepoint picture of Noah's Ark. She finished it in 2000, but never framed it until today. With my help, she mounted it and placed it a frame she had put together with her father's help a few weeks ago. Now she'll have something to hang on one of her apartment walls.
Posted by Penelope Marzec at 1/16/2006 02:22:00 PM No comments: 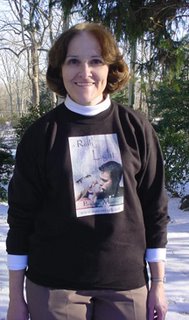 Yesterday I used a dark t-shirt transfer to iron an image of A Rush of Light onto a black sweatshirt. In just five more days, on January 20th, A Rush of Light will be released! I am so excited! I think I will wear my sweatshirt all week.

I will be giving away a black t-shirt (short sleeves) on Valentine's Day with the same book cover on it. You can sign up for the contest at my website Penelope Marzec. Then you can be a walking advertisement for my book--just like me! Of course, I hope you will read the book, too. :^)
Posted by Penelope Marzec at 1/15/2006 03:30:00 PM No comments:

So far, Book-In-A-Week has been Chapter-In-A-Week for me. Since I have to go to work, I have to use a modified BIAW plan. I had a tough time getting started on Monday, but I typed up five pages that day. By Tuesday, I was really into the story and even though I had to go to a class at night, I also mananged five pages. Yesterday, I had to take Daughter #3 for a blood test--but while I was in the waiting room I jotted down some ideas. When I got back home, I again wrote five pages. I would like to type up ten pages in a day, but it has not happened yet.

Nevertheless, I made progress and I had fun. It will be interesting to see how many more pages I can type up before the week is through.
Posted by Penelope Marzec at 1/12/2006 01:48:00 PM 5 comments:

I decided to join April Kihlstrom's Book In A Week program this week. I know that I will not finish the book I am writing, but I will probably make considerable progress. The last time I did this I accumulated fifty pages in one week. April, bless her heart, can pump out two hundred.

My main problem is turning off the internal editor who wants to fix each and every sentence as soon as it is written. For BIAW, I force myself to move along without looking back--most of the time. :^)

Interesting Story of the Day

One of the most interesting stories in today's local paper was Chase ends in Tinton Falls. I really wonder if I put a scene like that in one of my novels whether anyone would believe it. Despite a massive effort by police, the suspect got away.

I do have a chase scene in A Rush of Light with the hero chasing the villain. The hero, driving an SUV, ends up at the bottom of an incline due to a rollover and the villain gets away. However, the villain is eventually caught. In real life, the villain is sometimes never caught--which is rather disturbing and one of the reasons I enjoy writing fiction so much. In my stories, there is always a happy ending.
Posted by Penelope Marzec at 1/07/2006 02:04:00 PM 1 comment:

I am still trying to get back into the groove of working and writing. For the past few days I've been writing thank you notes and trying to catch up on the laundry. Our daughters came home with three months of dirty laundry each--or so it seemed. I have not been able to use my own washing machine until now. The water bill is going to be outrageous.

Today hubby and I went outside and removed all the Christmas lights from the bushes. We still have to pack away the rest of the Christmas decorations inside the house. A few years ago I wanted to quit the tradition of the big tree so I could eliminate most of the fuss, but hubby insisted that we continue in the usual manner.