Once I Was a Princess 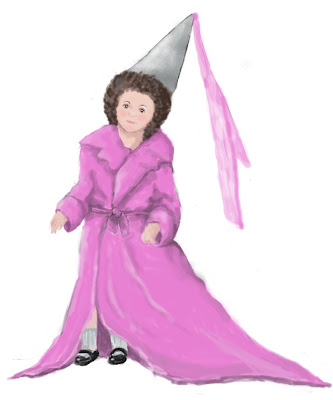 There weren't as many photos in the old days as there are now. There are no pictures of me dressed up for Halloween. So, I made this little sketch because I remember when I was a pupil in first grade and my mother dressed me as a princess. Mom made a cone-shaped hat, which she covered with aluminum foil. A scarf trailed out of the top of the hat. I wore my mother's pink robe. My mother had given me perm--so I had an overabundance of curls. I felt royal, but that was the last time I was a princess. I wasn’t the princess type for the most part. I wasn’t a tomboy either, but attempting to be glamorous takes time away from more interesting stuff—like writing, painting, and other creative pursuits as well as ice skating and rowing the boat in the lake. Plus there were always chores to do.
I did not raise my daughters to be girly princesses either. I have many photos of them in their Halloween costumes. A few times they were queens as I recall. But none of them aspired to be Miss America.
So, my oldest daughter was a bit taken aback that her daughter—at the age of four months—was introduced to the realm of Disney princess songs on YouTube by her paternal grandfather. 😅
I don’t think it’s a big concern—and I would be surprised if my little granddaughter becomes focused on the princess myth. Especially since her mother and father are scientists, though one can never be certain.
Still, I was a princess once. I tried out the role but it wasn't to my liking. I like getting my fingers messy.
Posted by Penelope Marzec at 1/26/2022 04:16:00 PM No comments:

Once Upon a Wedding Night 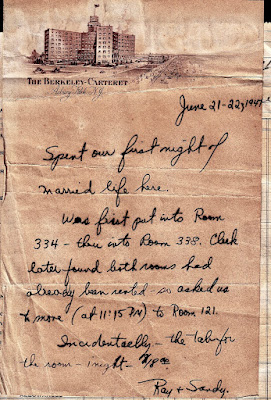 Whenever I see the Berkeley Oceanfront Hotel in Asbury Park, I think of my parents' wedding night. They told the story several times about how they had driven to what was then the Berkeley-Carteret. The management changed their room three times. In looking through my parents' papers, I found proof of the story. The letter is in my father's handwriting. There's a bill attached. Evidently, the hotel was very popular at the time. But obviously, the hotel management was not very efficient.

My parents thought the incident was funny, which is why they repeated the story every now and then.

I'm glad the building is still there after all these years because it reminds me of them.

First Aid at a Rest Stop

My heroines are braver than I am, which is a good thing because I usually put them in terrible trouble. I know my limitations, which have increased with age, but I also learned a long time ago that instruction in any subject doesn't necessarily make any student competent. What helps is practice along with a heaping dose of mental strength--often mixed in with the incentive of need. But sometimes, witnessing the success of any endeavor will help in understanding.

For instance, as a teacher, I regularly took classes in First Aid because it was required. I practiced CPR on a dummy and was good at it--at least the instructor said so. But dummies are easy to work with. Helping a genuine human is another matter.

Once, when hubby and I decided to take a trip, I learned a great deal about the Heimlich maneuver. I had been taught how to do it but I never used it. We stopped along the Turnpike for lunch at one of the rest areas. Our pleasant meal was suddenly changed when someone shouted out, "Call 911!"

We looked up to see a woman standing a few tables away with her hands at her throat. She was choking. Everyone in the room stood. The choking woman was tall. Another smaller woman ran up to her and attempted the Heimlich maneuver--without success. I sidled behind hubby and said a prayer.

From far across the other side of the huge room, a state trooper ran to the choking woman. He immediately grabbed her from behind and started the Heimlich maneuver. One, twice, three times. And then a fourth.

It worked. Whatever was stuck in the woman's throat came out and everyone in that room relaxed. The trooper saved that woman's life.

I learned that one thrust of the Heimlich maneuver--even by a state trooper--may not work. Keep trying, Don't give up.

But prayer is a good thing, too.