I have poison ivy on my face. I do not know how I got it because I know what poison ivy looks like and I never go near it. I was pulling weeds this week and planting the flowers my sister gave me--but I did not see any poison ivy anywhere near me.

Whenever I do see poison ivy in our yard, I spray it with Ortho Max Poison Ivy Killer which claims to destroy even the root. So how I got poison ivy on my face is a mystery though it’s not too bad--three rather ugly, oozy, red patches. I just have to constantly put stuff on it to stop the itch.

My brother used to get poison ivy every time he went on a camping trip with the Boy Scouts. Once he had it so bad, his eyes were swollen shut.

My husband, who grew up in Brooklyn, does not know what poison ivy looks like. When we first moved into our current home, there was a bunch of poison ivy climbing up a tree and he pulled it off with his bare hands. I was totally hysterical. I ordered him to put his clothes in the washing machine and to take a shower immediately. He did, but he did not get any poison ivy. I did--probably from touching the door handle that he had touched or the washing machine cover or the faucets.

Anyhow, hubby has never, ever had poison ivy. I suspect he might be immune to it. But evidently, I’m rather susceptible.

So maybe someone smeared poison ivy on a shopping cart.

My mother is home and seems to be over her bout of diverticulitis. That’s what landed her in the hospital this last time. She was on a liquid diet for several days and IV antibiotics. But every time she goes into the hospital, she gets totally disoriented--probably more from lack of sleep than anything else. It can get very strange when she is lying in a hospital bed and believes she’s in her kitchen.

However, once she’s home, things go back to normal. Sort of. 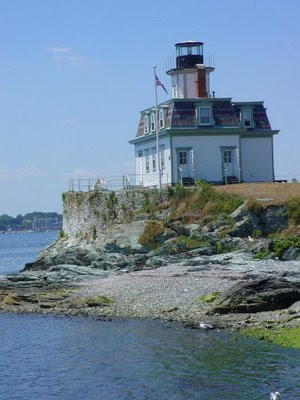 Hubby and I went on vacation! We visited Newport, Rhode Island. I’ve always wanted to see the summer “cottages” of the rich and famous.

We drove up on Monday. We only stopped at one antique shop so we arrived in Newport around 4 p.m. After checking into our hotel and eating dinner, we decided to check out the Cliff Walk. We started at the Forty Steps and walked south. We saw surfers at the foot of the cliff. To get to the waves, they had to wend their way out by walking barefoot through the rocks. They wore wetsuits and it looked as if most of them used short boards.

Hurricane Bertha had kicked up some mighty big swells and the surfers appeared to be having a mighty good time. In fact, all that surfing made them mighty thirsty. The trash can at the top of the cliff was brimming with beer cans and water bottles.

Hubby and I watched them surf for a while. It made me nervous wondering if they were going to surf onto the rocks at the foot of the cliff. However, their path along the wave carried them at an oblique angle.

As one surfer walked by, I asked him if there had been accidents when surfers ran into the rocks. He showed me his knees. A few scratches--that’s all, he explained.

I guess they know exactly what they’re doing.

The next day, hubby and I toured four mansions, The Breakers, Marble House, Rosecliff, and Chateau Sur Mer. The first three reminded me of the palaces I had seen in Europe. Chateau Sur Mer was somewhat less ostentatious than the others, but there is carved wood all over the house and it is exquisite.

The daughters in the family who lived in Chateau Sur Mer never married. Of course, they had limited choices--they were only allowed to marry men from eight other families--at least that’s what the tour guide told me.

Stories like that are what intrigued me more than all the marble, gold leaf, and Louis the Fourteenth furniture.

I do believe that money cannot buy happiness and most of the people who lived in the grand mansions did not always get to enjoy their prosperity for they suffered tragedies. Divorce, premature death, and arranged loveless marriages are not my idea of a good time--no matter how extravagant the lifestyle.

After dinner, hubby and I drove along Ocean Drive. I took a picture of the Castle Hill lighthouse and then the Goat Island Lighthouse. Maybe someday, I might get a chance to do a painting of one of them.

On Wednesday, we checked out Hunter House--the oldest of the Newport mansions, built in 1748--so it was not a palace, but a center hall colonial--lots of those in NJ, too.

Above the fireplace was a painting by Gilbert Stuart--his first, a painting of dogs. The tour guide told me that the father of the Mr. Hunter who bought the house was a physician who cured Gilbert Stuart of an eye ailment. Gilbert was fourteen at the time and the doctor noticed the sketches the teenager had drawn. The doctor gave the young Gilbert paints and introduced him to the portrait artist who had painted the doctor’s portrait.

And thus, if it had not been for that one good doctor, Gilbert Stuart would not have finished the famous portrait of George Washington. I love hearing stories like that. It can easily be translated to a fictional story.

After Hunter House, hubby and I hopped on a ferry to Rose Island. I had originally thought of staying at Rose Island. I am glad I did not. I think I would have gone a little stir crazy.

The lighthouse is very nice, but guests can only walk along a small portion of the island. The rest of it is a bird sanctuary. In truth, the seagulls are the true owners of that island. Baby seagulls and their mothers were all over the place. The mother seagulls were not happy with any human who got anywhere near their offspring.

Hubby and I brought our lunch to the island. We ate at a picnic table in the shade of the lighthouse, I took some photos, picked up some shells, watched the baby seagulls annoy their mothers, and decided I’d had enough.

Back in Newport, we visited the Elms. The Elms was the home of Edward Berwind, the coal magnate. My grandfather, a coal miner, probably helped to contribute to Mr. Berwind’s lavish lifestyle. We actually had two tours of the Elms. One was the standard tour of the home, the other was a Rooftop and Behind the Scenes tour--which featured the places where the servants worked and lived.

It was a hard life for the servants, but the most startling fact was that the last inhabitant of the Elms, Julia Berwind, Edward’s sister, kept the house functioning in the same style with a full staff just as it had been back in 1901. When she died in 1961, there was still no electric washing machine. They used an agitator by hand to do the wash.

However, the house would have fallen to the wrecking ball had it not been for the Preservation Society of Newport County. Without them, there would be another shopping mall in place of the Elms.

The next day we started off the morning by visiting Kingscote, finished in 1841, a Gothic Revival home. We got there ten minutes before it opened and I looked through all the photographs I had taken while we waited for the tour to begin. I realized that I was not quite sure about the location of some of the pictures. Was that the Marble House, or Rosecliff, or the Elms?

So I bought a guidebook.

After Kingscote, we toured the Isaac Bell home, built in 1881. Isaac Bell was a cotton broker and brother-in-law of the publisher of the New York Herald.

After lunch, we headed to Chepstow, an Italianate villa, circa 1861.

At that point, we felt we had overdosed on mansions.

We drove to Green Animals, a topiary garden in Portsmouth. I am always cutting back the hedges in our yard--but ours are plain and boxy. It is amazing to see privet hedges and yews clipped into whimsical, fanciful shapes.

Not that I would do it. It is difficult simply keeping the hedge--and all the other bushes in our yard in check. Sometimes, I feel like a need a machete instead of hedgeclippers to hack away the jungle around the house.

We stopped at the Newport Winery and tasted quite a few wines. I liked their Gemini wine and the Great White. I enjoyed reading the descriptions of the wines. The ones that were most elegantly written were the ones I choose to taste. :^)

We walked along Third Beach. The sand is light grey--unlike the sand in New Jersey.

On Friday, we left Newport and headed to Simsbury, Connecticut, to see my sister, her hubby, and their children. My sister is Curator of the Gardens for the grounds of the local historical society so she took us to the Phelps Tavern Museum--another old house!

However, it was not a palace and we learned something interesting. When fireplaces were being built people would place old shoes from family members in the fireplace. This was for good luck--or so it is thought.

My sister also took us to see the largest tree in Connecticut--The Gifford Pinchot Sycamore. With a girth of 27 feet it is very impressive.

Gifford Pinchot founded the US Forestry Service. Hubby and I visited Grey Towers a few years ago, which is the Pinchot mansion in Pennsylvania. But Pinchot was born in Simsbury--so they dedicated the largest tree they could find in honor of him. :^)

I set up a new contest for Labor Day at my website. I will be giving away two diskettes. One contains an HTML file of my very first book, Sea Of Hope, and one is an HTML file of another one of my books, Heaven's Blue. They are both EPPIE award-winning inspirational romances. Since they are on diskettes, you need to have a disk drive to use them. Some computers no longer have disk drives and diskettes are becoming obsolete.

But if you do have a disk drive, the contents of the diskettes will open up in your browser where you can read my e-books.

The response for the contest so far has been nothing short of mind-boggling. Evidently, my contest was listed at another site on the web frequented by those who love to enter contests. :^)

News travels fast on the web, but this means that the competition for those two diskettes is getting really fierce. 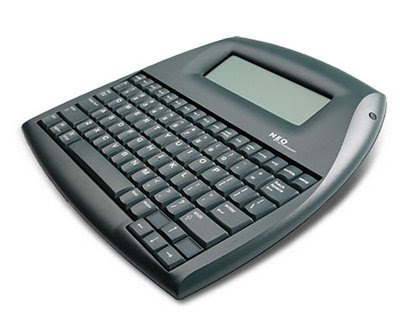 Last Thursday, my AlphaSmart Neo arrived. It is a terrific technological advance for me. I am now untethered. :^) I can literally write anywhere. The machine is lightweight and the batteries last a long, long time. I do not have to keep recharging it. (However, there is a model with rechargeable batteries.) Click on the link to get all the details at the AlphaSmart website: AlphaSmart.com

Meanwhile, my mother went back into the hospital on Saturday. She had severe abdominal pain. After a CT scan, we found out she has diverticulitis. My sister, her husband, and boys drove here to see Mom in the hospital. So I spent most of my time feeding people--and after they left, there were extra towels and sheets to wash. Not much time to write--or even think. But I am glad they could be with Mom in the hospital.

I did show my new Alphasmart to my sister and her boys. My nephew said that when he was in middle school, the teachers gave AlphaSmarts to the kids with the really bad handwriting.