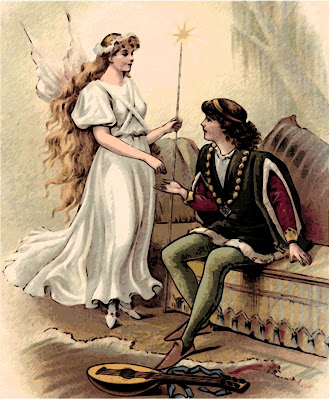 Occasionally, I have interesting dreams. I call them story dreams. They are always rather interesting and similar to watching a movie. Most of the time, my dreams don’t make much sense—or are scary in a vague way. But the story dreams are delightfully vivid. Since I’m a writer, I question if I should turn the dream into a book, though usually I only get a part of the story. I would have to make up the rest.

The other night I dreamed of a lovely young woman with long brown, wavy hair and a handsome young man. They were in a castle in separate rooms across the hall from each other. The young man had a German Shepherd dog at his side and a rifle. The young woman had rifle, too. (Not a magic wand and no wings either as in the picture on the left.) Evidently, they knew some bad folks were coming and they were ready.

And that’s the dream.

Now what would you do with that?

A Sweet Kiss from A RUSH OF LIGHT 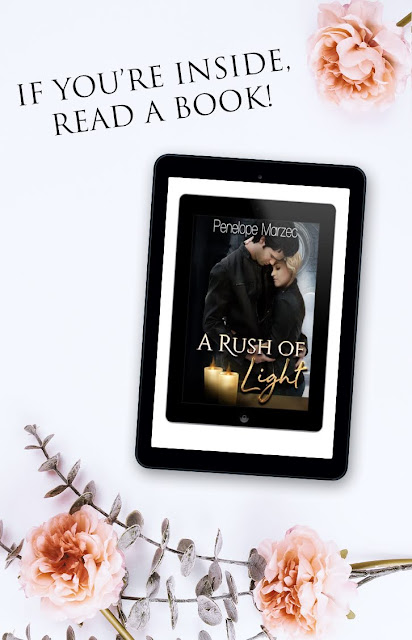 Sweet and satisfying with fewer calories than chocolate. Enjoy. 💖

With a ragged breath, she lifted her eyelids and focused her gaze upon him, her sable eyes brimming with sorrow, but she said nothing.

His heart hammered against his ribs and he found himself also mute as his wits scattered into a jumble of confusion. Do I love her? I only wanted to be a friend. Love is serious. Love is forever. Love means marriage. He gulped hard. Fighting to keep his hand steady, he slid his fingers under her chin and tilted her face upward. Her eyes lowered and her lashes fanned out on her white cheeks. Still stunned, he caressed her pale skin with his thumb in an attempt to bring some color back into it, but her skin remained cold and pallid.

Touching her sent desire colliding into him with a force that disintegrated his usual rigid code of behavior. He leaned forward and swiftly engulfed her in a crushing embrace. Dizziness overwhelmed him as he clung to her. Was it the bump on his head or the woman in his arms?

“I think I need some coffee or something...” She muttered against his chest, “Before I pass out.”

Feeling off-balance himself, Nick released her from his hold and drew in a steady breath. With the dark smudges under her eyes, she didn’t look well. Then he remembered the flattened bagel in his pocket, and he handed it to her.

“Thanks.” Her hand quivered as she took the crumbling bagel from him.

He swallowed and stared at the leaf-strewn earth beneath his feet. All this time he hoped to change her attitude concerning faith, but now... What was he going to do? He did not intend to get involved with her.

But you love her.

She glanced up at him and he caught a glimpse of something almost wistful shining in her eyes. He felt powerless against that look as another surge of longing set his heart thundering.

Her hand reached up to touch the place where the dimple usually appeared in his cheek. “You do care about me. At least, a little?”

Spring would blossom in a few days, but Nick felt it in his heart right there. He tripped over his words, “O-of course I do.” Flustered by his own incoherence, he pulled her close again and their hearts beat together.

A dreadful ache grew in his throat. Love scared him half to death.

A tremulous smile lifted the corners of her mouth. “When we danced last night, it was awesome.”

When we kiss, it's spectacular. He could not stop himself. He leaned forward to brush her lips with his. He felt her stiffen for a moment and fear shot through him, but as his touch came upon her, he found the soft warmth of her breath welcoming him.

With a delicate intimacy, his mouth covered hers and he sank into the slow sweetness of her. He had dreamed of her kisses and had hungered for more of them, but he now found himself filled with an emotion that left him nearly breathless.

The Power of a Penny 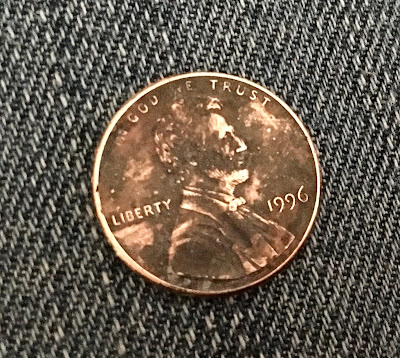 I found this penny in the dirt in a median between parking lots. I couldn’t tell whether it was heads up or down because it was so dirty. I came home and scrubbed it. To me it doesn’t matter if the pennies I find are heads up or down. My mother pointed out to me that on every penny it says, “In God We Trust.” So every time I pick up a penny, I am reminded that God handles all the big stuff.

Once when I was teaching, one of my young pupils handed a penny to me. I told her to keep it, but she refused. She said it was a bad luck penny. She found it heads down. I was surprised that a four-year old held such a strong belief in the power of a penny. It is worth one cent no matter which way it lands on the ground.

In the old days, when I was a kid, finding a penny was a treasure because I could go to the store and buy a piece of penny candy. In essence, every found penny in those days was good luck because I could buy something with it. I can still do that today, but it might take a bit more time to save up enough pennies.

The important thing to remember is that a penny doesn’t guarantee good luck or bad luck. That is far beyond the power of a penny. However, giving a bit of thanks is certainly in order. 🙏

Snowdrops are blooming even though storms continue to threaten us with wind, rain, and maybe more snow. But spring will be here and more flowers will bloom. It's such a promising time of year! However, the world situation makes me apprehensive. I pray for Ukraine. I've donated to Catholic Relief Services. I hope there will be an end to this conflict soon. But I'm a little too old to pick up a Kalashnikov and head to the front lines. And while I do have a small army of prayer shawl ministers, I don't think we could make enough blankets or shawls to help out the two million Ukrainians who have fled the bombing. It is such a horrible catastrophe.

So, I write stories of forgiveness and faith in an effort to combat evil. I don't know if it helps, but it helps me. I just finished going through the galley for ANGEL OF THE L TRAIN. There weren't many corrections to make, which was nice. I listened as the computer read it to me first. That is a very effective way to find mistakes. Then I printed out a paper copy of the galley and read it backwards. I found a few more things that needed to be corrected that I didn't find the first time. They were small things. For instance, the word nosy. Or is it nosey? Actually both are acceptable, but the preferred version is nosy--and I used it twice in the manuscript--once as nosy and once as nosey. I think it needs to be consistent.

I don't have a release date yet. But I have some some terrific news to share about the book. I just can't share it yet until all the paperwork is done. Still, it is something to look forward to and lightens my heart.