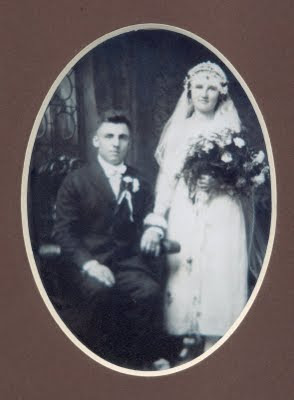 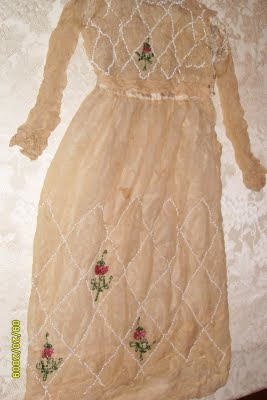 My mother's parents were married in 1919. My grandmother met my grandfather when she was sixteen, but her mother refused to allow her to marry him at that point. He joined the service and came back three years later. Their wedding lasted three days. My grandmother always insisted that she had the most beautiful wedding dress. The large photograph of her in her wedding gown with my grandfather seated beside her always hung on the wall in her bedroom.

As each of her granddaughters grew up, she would tell them at a certain point when they were too big for the wedding dress. Eventually, even my skinny little twelve-year old cousin was too big for the dress.

My sisters and I begged my grandmother to show us the dress--even though we could not wear it. When my grandmother brought it out, we were all horrified. It was crumpled and brown and certainly did not look a thing like the one in the photograph.

When my grandmother died, my mother kept the wedding dress. The other day, my father handed the box with the gown in it to me. I took the dress out of the box and gently placed it on the dining room table. It is so incredibly small. It looks like a six-year old child might be able to squeeze into it.

I knew my grandmother as a short, but plump woman. How delicate she must have been when she was younger. Yet, she bore seven children and lived to the age of ninety. So she was actually rather sturdy. 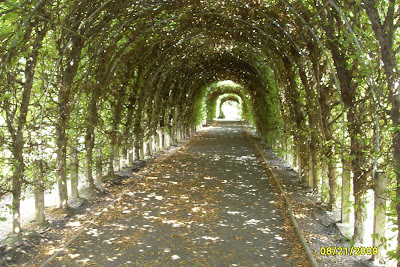 This summer we spent the entire month of July at the hospital with Mom. And then we went to Florida to help out hubby's parents. We did not have a vacation.

But we salvaged a few days last week and this week as our staycation. Fortunately, since we live in New Jersey, there are plenty of things to do nearby. We went to Snug Harbor in Staten Island one day. They have beautiful gardens but they also have a fabulous collection of John A. Noble's work. You must go there and see it! 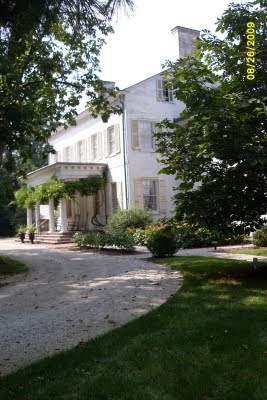 We also visited Morven, the home of Richard Stockton and five NJ governors. It is no longer the governor's mansion--but that's because the dining room is too small. :^)

That same day we checked out Rockingham. George Washington slept there.

We went on the paddle boats at Turkey Swamp park one day for some Vitamin D and exercise. I highly recommend a paddle boat ride to everyone.

We went to Burlington as well to see the birthplace of James Fenimore Cooper. Afterwards I downloaded Red Rover and The Pilot from www.gutenberg.org. I never read those two books. 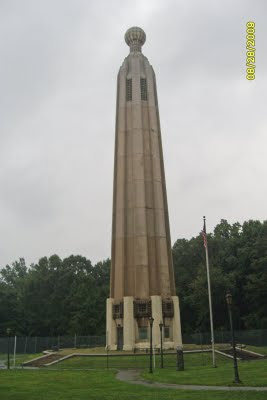 We also visited the Edison Memorial in Menlo Park. That's a giant lightbulb at the top of the very art deco tower. Beside the memorial is a small, but very nice museum. It is worth a visit.