I Finished the JeRoWriMo Challenge 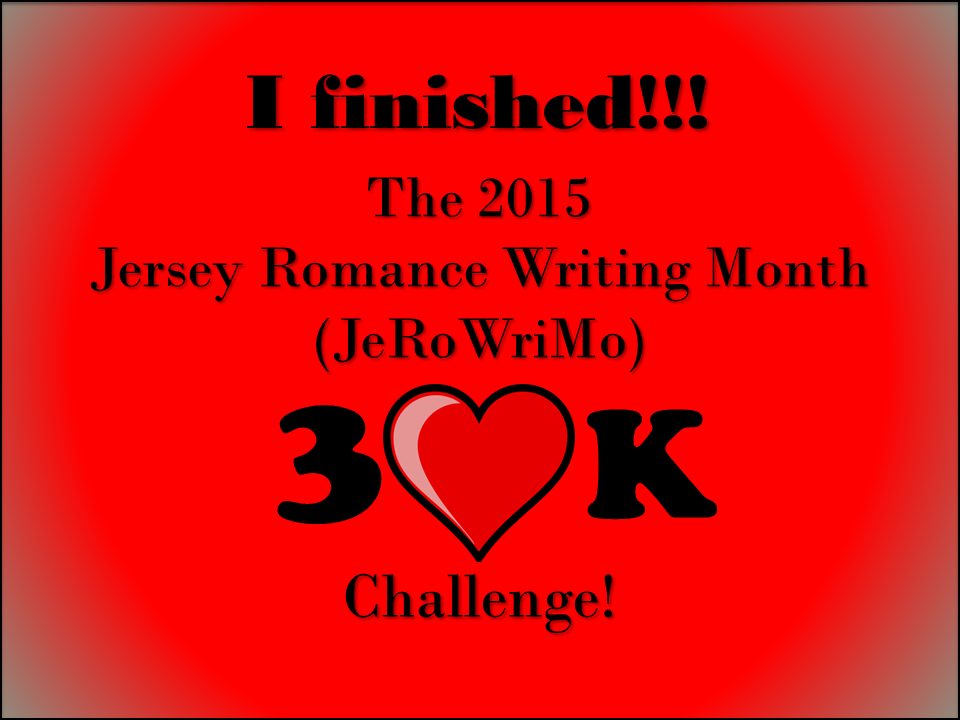 Last night, I soared over the finish line, typing past the 30,000 word mark in my current work-in-progress.  I didn't get to the end of the story--and I still haven't decided upon the title for this book, but logging in 30,000 words during the month of February was a daunting task.

Nevertheless, I had fun. This is the third time I've tried the challenge. I finished PATRIOT'S HEART and PATRIOT'S PRIDE with the challenges in 2013 and 2014. Nancy Herkness is the head cheerleader and truly encourages everyone in our group.

The idea with a challenge like this is to silence the inner editor--that annoying part of the brain that wants to quibble over syntax. My book is a rough draft--and I know it. It will need to be revised, but it's hard to fix an empty page of paper.

Many people avail themselves of NaNoWriMo challenge in November--a 50,000 word challenge. I've never tried it because November is a busy month with Thanksgiving and Christmas preparations.  I find February fits in better with my schedule. Not only that, but since I am a member of the New Jersey Romance Writers, I know all the other members in the group.

Writing is a solitary endeavor, but with a challenge like JeRoWriMo it doesn't feel that way.

My Worn Out Thesaurus 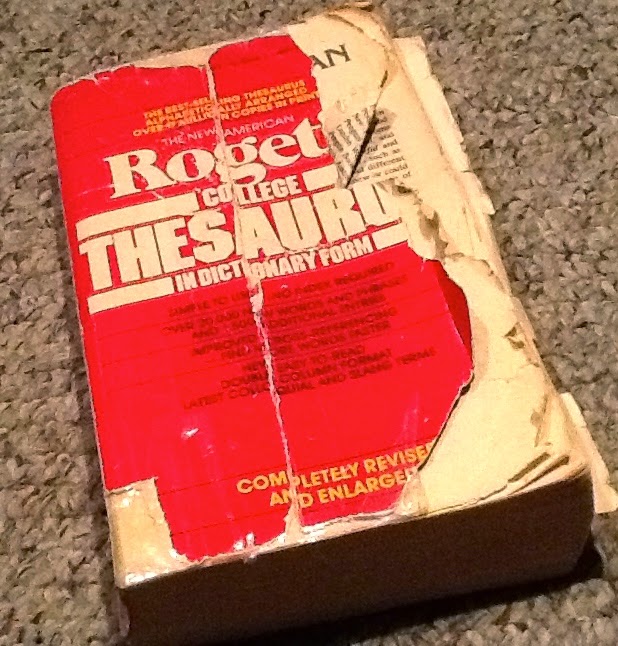 This is my favorite thesaurus. I think you can tell. I should get a new one, but I've grown used to this one. I taped the cover together many years ago, but it's getting to the point where the pages are starting to disintegrate. :-(

I've been using it a lot frequently since I'm still busy with JeRoWriMo. So far this month, I've written 27,518 words. I'm always looking for a better word and my thesaurus is at my side with plenty of suggestions. 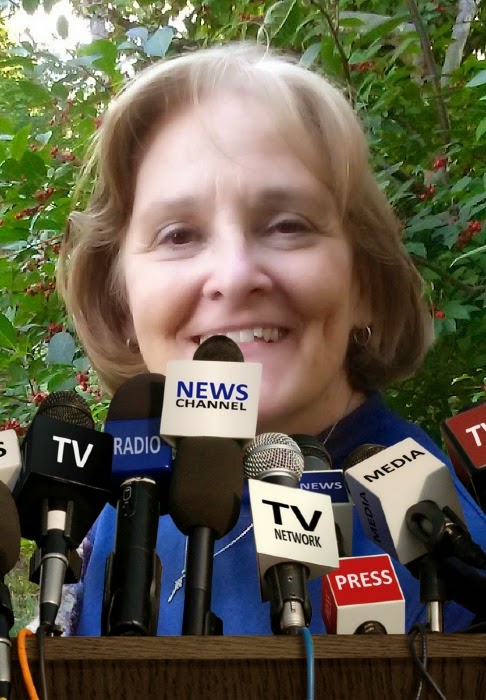 My paranormals all have sex scenes. The reader goes into the bedroom right along with the protagonists. In real life and in fiction, sex is powerful. It can really mess things up emotionally for the characters. It ratchets up the tension since the characters have more to lose.

However, all my books are romances, which means readers are guaranteed a happy every after ending. But readers do have a choice as to how much heat they prefer in a romance. If you're not sure about a book, check https://www.allromanceebooks.com. They have a heat level indicator for every book, represented by flames. :-)

For a quick guide to the heat levels in romance, check out https://www.goodreads.com/author_blog_posts/4776761-romance-heat-level-ratings-sweet-spicy-and-hot
Posted by Penelope Marzec at 2/20/2015 09:59:00 AM No comments: 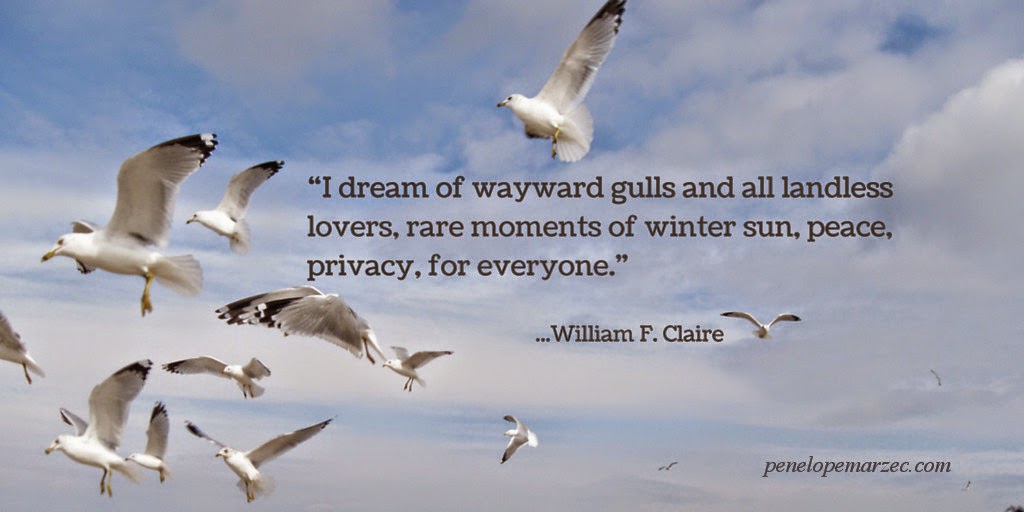 I took this photo in February. It's one of my lucky shots. The quote by William F. Claire seemed perfect for the picture. Sometimes, life is like that. You find two beautiful things that go together and it's wonderful. 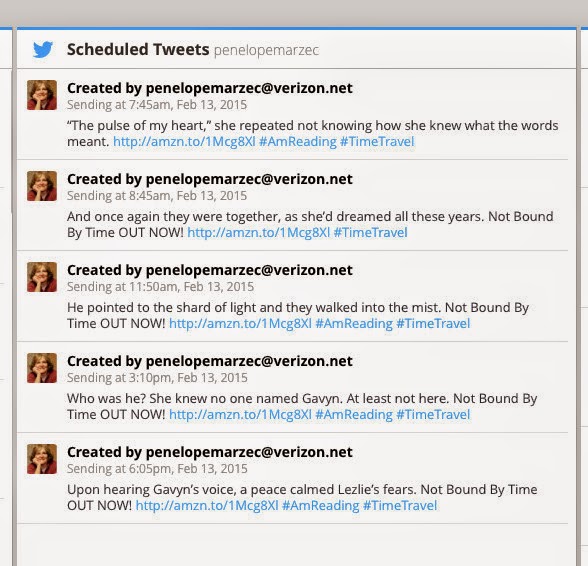 This is a screenshot of some of the tweets I have scheduled to send out on Hootsuite. I'm helping to promote one of my publisher's new releases. Hootsuite is a valuable time-saver when it comes to posting on social media sites. Not only can you can schedule postings, but you can schedule them on several different sites. It saves time and makes posting much simpler.

You can also receive immediate feedback--as long as you shorten links with Hootsuite's link shortener. I have a free account, which limits me in posting to three social media sites, but that's good enough for me.

You can pay for lessons at Hootsuite's University, or you can go online to find out how to use the site. My favorite place to look for help--on ANY topic--is YouTube. Go there now, type Hootsuite into the search box and you'll see what I mean. :-)

The Beach in the Wintertime 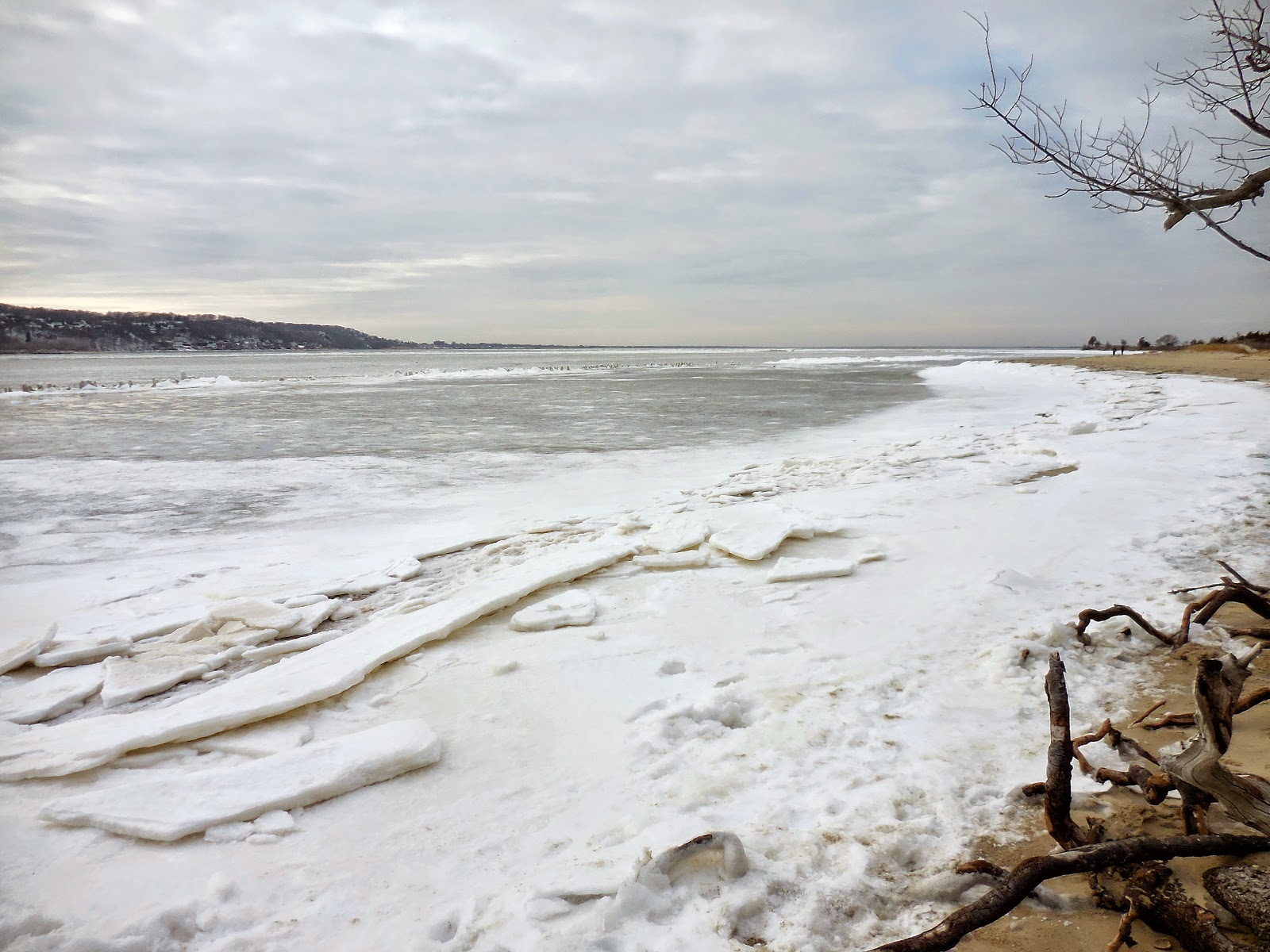 I love the beach. I love it in all seasons of the year--although sometimes even the beach is too hot in the summertime. And too crowded.

Since the temperature hovered near forty degrees on Saturday. I went to the beach. The photo above is on the bay side of Sandy Hook, looking toward what's known as Skeleton Hill Island. I wanted to see the harbor seals who spend the winter on that sandbar. There's no way to get close to the seals. They are protected by law, but they are also rather smart and stay on their little sandbar while people stand on the shore and use binoculars to gawk at the seals.

However, I also needed a nice walk. I signed up for JeRoWriMo, the New Jersey Romance Writers' writing challenge this month. I've finished the first week of the challenge with a respectable amount of words toward the goal of 30,000 for the month.

I am pleased to present another guest author from the Prism Book Group on my blog today! Her book is awesome. :-) Read all about it below.

Renee Lockhart has her eye on a lofty goal…to fill the open position of morning radio show host at the radio station where she works.  When her co-workers sign her up for a local TV version of “the Bachelor,” Renee goes along with it in order to raise her public profile.  Ben McConnell, the most eligible bachelor in town, insists that Renee be placed on the show, despite her bumbling audition.  Ben gets much more than he expected in Renee.  He gets a girl who doesn’t bow to his every whim…and a girl who opens his eyes to true, unexpected love. When nothing goes right on the local program called "Accept this Dandelion"...hilarity ensues. Imagine your worst possible dates happening...on TV!

Add “Accept this Dandelion” to your Goodreads list HERE

Brooke Williams writes in a sleep-deprived state while her daughters nap. Her romantic comedy is best read in the same state. Brooke has twelve years of radio in her background, both behind the scenes and on the air. She was also a television traffic reporter for a short time despite the fact that she could care less about hair and make-up. Today, Brooke stays at home with her daughters and works as a freelance writer for a variety of companies. When she isn’t working for paying clients, she makes things up, which results in books like “Accept this Dandelion.”  Brooke is also the author of “Wrong Place, Right Time,” “Someone Always Loved You,” and “Beyond the Bars.” And she looks forward to the upcoming released of “Mamarazzi” and “Baby Sheep Gets a Haircut.” Brooke and her husband Sean have been married since 2002 and have two beautiful daughters, Kaelyn (5) and Sadie (nearly 2).

Praise for Accept this Dandelion

"This book is adorable. I had to sneak away from my desk to read the rest of it once I started. It had my smiling and laughing the whole way through."

Reviews for THE PIRATE'S WRAITH

Goodreads reviews for The Pirate's Wraith