I am reading Two Years Before the Mast, by Richard Henry Dana, Jr. (You can read the entire book online at http://www.bartleby.com/23/) I'm reading it as reference material for my pirate book. Today I read a section of the book concerning sea chanties. I've always loved sea chanties, but it was interesting to read Dana's comments about them.

The sailor’s songs for capstans and falls are of a peculiar kind, having a chorus at the end of each line. The burden is usually sung, by one alone, and, at the chorus, all hands join in,—and the louder the noise, the better. With us, the chorus seemed almost to raise the decks of the ship, and might be heard at a great distance, ashore. A song is as necessary to sailors as the drum and fife to a soldier. They can’t pull in time, or pull with a will, without it. Many a time, when a thing goes heavy, with one fellow yo-ho-ing, a lively song, like “Heave, to the girls!” “Nancy oh!” “Jack Crosstree,” etc., has put life and strength into every arm. We often found a great difference in the effect of the different songs in driving in the hides. Two or three songs would be tried, one after the other, with no effect;—not an inch could be got upon the tackles—when a new song, struck up, seemed to hit the humor of the moment, and drove the tackles “two blocks” at once. “Heave round hearty!” “Heave round hearty!” “Captain gone ashore!” and the like, might do for common pulls, but in an emergency, when we wanted a heavy, “raise-the-dead” pull, which should start the beams of the ship, there was nothing like “Time for us to go!” “Round the corner,” or “Hurrah! hurrah! my hearty bullies!"

We should all start singing when we really want to get some work done! Here's one song I've always enjoyed.

I bought this book some time ago because I always wanted to write historicals. However, it took a while before I had the nerve to do it. English is constantly evolving with new words being added and old words falling out of use. I bought English Through the Ages to ensure that I did not have my characters speaking words that would not have been invented during the time period in which the story is taking place. dictionary.com also gives the dates that most words were in use and I often use it just to be sure because it's quick.

Nevertheless, I believe that reading the lists of words in English Through the Ages for the time period during which my novel is set gives me a better idea of what life was like then--what was new, fresh, and contemporary.

For instance, the word cerulean was born about 1670. I love that color. Ethereal was also in use at that time as well as jaded. Wonderful descriptive words!

Transmogrify was in use by 1660. That would be terrific for a paranormal.

Then there's homemade. Homemade was in use by 1660. That surprised me. I would have thought almost everything at that point was homemade. I guess Mom's homemade biscuits have always tasted better than the ones that anyone else makes.

So if you're going to write historical fiction, I strongly suggest you get a copy of English Through the Ages.
Posted by Penelope Marzec at 9/17/2010 05:38:00 PM 1 comment:

During every turbulent time period in our nation's history there have been songs that brought our citizens together, uplifting them, giving them a rallying cry, and bolstering their faith.

The awesome part is that everyone knew the words and could sing along.

Folk songs motivated my generation during the turbulent sixties. We had great music and terrific musicians who not only sang the songs but went out and marched in the protests.

World War II, the Great Depression, and World War I there were rousing ditties to raise the spirits of our citizens.

There were songs for the unions seeking a better life for oppressed workers--songs that my grandfathers and my father knew.

We need songs to help us work together like one big, happy--if somewhat dysfunctional--family. Joyful songs. 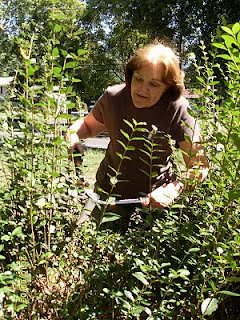 A writer cannot make every reader happy. Occasionally, an author will write something that rubs a reader the wrong way.
I was clipping the hedges the other day when I remembered a scene in a novel I read many years ago where the heroine was also clipping hedges. The book was written by a very well-known novelist who has sold a gazillion books. I had loved the first book of hers that I read--so I got another one. However, in the second one, the heroine's situation annoyed me a bit. To me, it seemed unrealistic. But I come from humble beginnings. What do I know about the lives of the rich and famous? Only what I read in the gossip papers or see on television. Nevertheless, the plot held together and I finished the book.

I bought a third book by the same author. I frowned when I reached the part of the story where the heroine goes outside to clip hedges. It wasn't a long drawn out episode. It was a simple reaction scene which allowed the character to reflect and share her thoughts with the reader.

Unfortunately, the reader happened to be me--a woman who regularly battles bushes and fears that someday the bushes might win. The scene completely shattered my concentration. I just could not believe for one moment that the author had ever held a pair of hedge shears in her hands. Of course, it was entirely possible for the character in the book to be involved with clipping those hedges. But I was not thinking of the character. I was thinking of the author.

It was an unfair reaction on my part, but that's what happened. For me, the experience of reading that particular book was ruined. My response does not mean the author was not a good writer--after all, she's sold a lot of books over the years! For me, she simply happened to hit on a raw nerve.

To read a book, every reader must suspend their disbelief and accept the world within the novel. What happens in the story does not have to be real--otherwise we would not have Harry Potter and Twilight. However, all events should seem plausible given the boundaries established by the author.

I've written stories that could never realistically occur--genuine fantasies with lots of paranormal magical stuff. Tadeusz in The Beast of Blackbirch Manor was cursed by a witch and is going to turn into a wolf on his thirty-third birthday unless he finds a woman who loves him. Evidently, readers are willing to suspend their disbelief in reading that book because it's been very popular.