I'm praying for a peaceful 2019 for everyone. For me, 2018 was a vast improvement over 2017. While our oldest daughter's wedding was celebrated in 2017 and that was a joyous occasion, I had radiation treatments in the beginning of that year, which seemed to drain every ounce of energy I possessed. This year I added an app to my phone to prod me into making an effort to improve my physical stamina. I think it helped. However, this year hubby and I spent a lot of time in the hospital with my mother-in-law. I am ever grateful for the ability to crochet because I did a lot of it while waiting in the ER beside my mother-in-law's gurney or while visiting her in her hospital room or in rehab. At ninety-seven years old, my mother-in-law must be made of strong stuff.

Hubby and I didn't go on any grand vacations, but we did visit my northern sister and that was fun. We also went on a wide variety of day trips suggested by Daughter #2 as well. As far as writing goes, I reissued Sea of Hope and the publisher at Pelican Book Group gave Daddy Wanted a new cover. Patriot's Courage is still in the process of being published. It has gone through one edit, but there will be more. I have been working on a contemporary romance in the meantime.

I put together photos from my journey through 2018. It's seven minutes long even though I left some photos out. 😆 So if you've got seven minutes you can browse through the exciting life of an author. 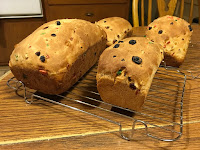 "Christmas Magic" was a winner in the 1992 holiday story contest sponsored by the Asbury Park Press. There are no cellphones in this story because at the time I wrote it few people owned cellphones. The story is actually based on an a real incident--but that happened during the summertime, not at Christmas. Still, if the little white-haired woman wasn't Mrs. Claus, she was certainly an angel in disguise. 💕💕


Beverly kneaded the satiny dough. With its pungent bits of candied citrus, this bread was destined to grace some elderly person's table for tomorrow's Christmas dinner.

Lucy, Beverly's 7-year-old, patted her own little mound of dough. "Why couldn't we go to a party like Daddy and Mark?"

"Daddy's office always has a party every Christmas Eve and Mark wanted to get together with his friends. They'll be home all day tomorrow." Beverly nestled each loaf tenderly inside the bread pans. "And I promised to make this bread."

A pout formed on Lucy's lips as she pummeled her dough. "I want to go someplace! This is boring!"
Beverly frowned as the phone rang. But Lucy scrambled off into the family room. She came back several minutes later smiling proudly.

"Mrs. Roper is sick. I told her it would be easy for us to carry a hundred loaves of bread with our minivan."

Beverly groaned. It would take 45 minutes to drive to the distribution center. One way. She glanced around. The tree, centered in the front window, twinkled merrily. All the presents had been wrapped and placed under the tree.

Lucy's mood did not improve despite the heavenly aroma of 100 loaves of fresh baked bread in the car. She didn't even want to listen to her favorite tape of Christmas carols.

"Robert told everyone in the class yesterday that there is no Santa Claus."

A pang squeezed Beverly's heart as she drove. The nerve of that rotten Robert.

"Miss Jensen took Robert out of the room and talked to him. She was very angry."

"Did he apologize after that?"

"Oh sure. But then when we went outside on the playground he told us we were all a bunch of babies."

Beverly thought of the cookies and milk beside the fireplace. Did they have to lose the magic?

"What did you say to that?" Beverly's throat felt tight.

"I told him to stop." Lucy tilted up her chin. "I told him he should be ashamed of himself. He made Sara and Jessica cry. And anyway, he believes in Dracula."

But Beverly was afraid to ask Lucy if she still believed in Santa. So she didn't.

The car seemed to have a black cloud in it on the way home. Even the comforting smell of bread hadn't lingered on when all those loaves left. The country road had few streetlights, too. When the car's engine suddenly stopped, Beverly had a moment of panic before she saw a liquor store just ahead.

The minivan had just enough power to coast into the parking lot.

Beverly tried starting it again but it refused to kick over.

"Hey, lady. Sounds like you forgot to put gas in it." One of the liquor store's customers commented as Beverly got out of the car. Another fellow snickered in agreement.

"I have a half a tank of gas." Beverly informed them through her clenched teeth. She would let her husband know that male chauvinism was alive and well.

"At least it isn't snowing--yet." Beverly glanced up at the black sky.

A battered Toyota pulled up beside them and a white-haired woman got out.

"Having trouble?" she inquired as she tapped on the glass.

Beverly rolled down her window. The woman had to be less than 5 feet tall.

"It just died in the middle of the road and it won't start up again. And I have plenty of gas in the tank."

"Try starting it up again." The woman ducked under the hood as Beverly ground on the starter again.

"Keep going!" The woman called out.

Maybe Beverly would ruin the starter or the battery or some other vital organ, but right now she wanted to get home. So she turned the key and held her breath.

Beverly's thanks seemed so inadequate.

The white-haired woman wiped her hands on an old cloth hanky. "Carburetor. Better get it checked."

For a long time as Beverly and Lucy continued homeward, they both listened attentively to the sound of the engine.

Beverly smiled. The magic was still there. "I think you're right." 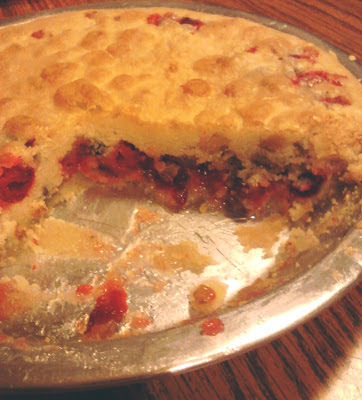 This is a quick, easy treat. I bake it every Christmas (except for the one year when we did not have a working oven). It's delicious! While I enjoy it plain, ice cream or whipped cream on top is nice, too.

I originally discovered the recipe in my New York Times Heritage Cook Book, but the recipe can now be found easily online.

1. Preheat oven to 325F.
2. Spread the cranberries in the bottom of a well-greased ten inch pie plate.
3. Sprinkle with one half cup of the sugar and the nuts.
4. Add the remaining sugar to the eggs, beating well. Beat in the flour, butter, and shortening. Pour over the cranberries.
5. Bake about 1 hour, or until crust is golden brown.

The pie goes fast--so you better make two of them. :^)

The Perfect Christmas or How to Deal With Holiday Stress 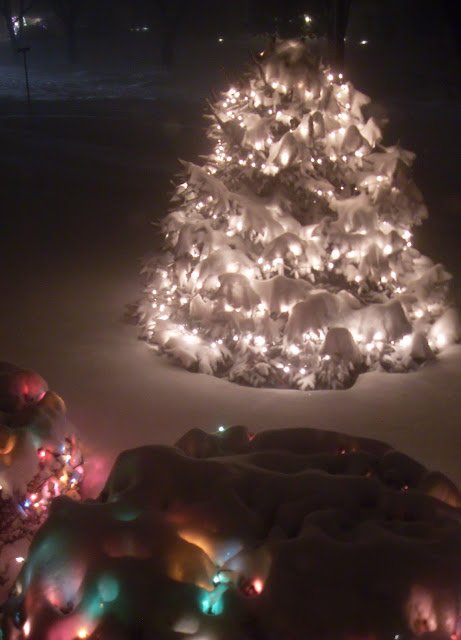 Doesn't that look like a perfect Christmas? I took that photo the Christmas after my mother died, which was a sad time. Unhappy and tragic things happen all year long, but during the holidays when we are all supposed to be jolly, grief can be especially painful.

I know part of the problem is stress. There's just too much to do this time of year and everyone feels compelled to jump in and get it all done. In addition to the usual tasks, there's decorating, purchasing gifts, extra parties to attend, and family gatherings that often create tension. Everyone strives to keep up but trying to do too much at one time is not healthy.

Then there's the worrying. Hey folks, you are not supposed to worry. It won't change a thing. Jesus said so.


He said to [his] disciples, “Therefore I tell you, do not worry about your life and what you will eat, or about your body and what you will wear. For life is more than food and the body more than clothing. Notice the ravens: they do not sow or reap; they have neither storehouse nor barn, yet God feeds them. How much more important are you than birds! Can any of you by worrying add a moment to your life-span? If even the smallest things are beyond your control, why are you anxious about the rest?" (Luke 12:22-26 NAB)

So stop worrying. Or at least, make a conscious attempt to do so.

This year on the day before Thanksgiving a wave of anxiety swept over me. I expected it. One very tragic memory often throws me off at some point during this season. My brother was in the Air Force when his plane crashed in 1973 right before Christmas. Each year since then, there will be a time when a pall settles on my heart. But I've learned how to get over it. Distraction can be a good thing. That day, I got out an old cookbook and baked two lovely loaves of bread. Simply the aroma of that bread rising in the oven was enough to lift my mood.

The next day, after I put the turkey in the oven, I got a call that my mother-in-law was being shipped off to the hospital with a suspected case of shingles. Hubby picked up our daughter at the train station and then they both went off to check in on his mother in the ER.

I stayed home, basted the turkey, sliced my beautiful bread (also ate some), and prepared the feast. My mother-in-law was settled into a hospital room and received excellent care. Hubby and our daughter came home in time to eat the dinner. Our other daughters and their spouses joined us and we had a pleasant time chatting. Everything worked out just fine.

If you're having a difficult time dealing with holiday stress, even the Mayo Clinic has advice for you. Read it at https://www.mayoclinic.org/healthy-lifestyle/stress-management/in-depth/stress/art-20047544