We Are All Disabled 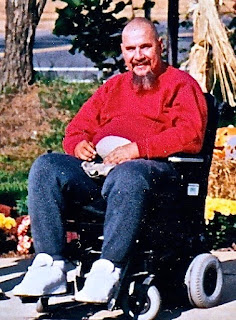 This was my cousin, Bill. He operated those huge hydraulic excavators, crawler cranes, crawler tractors and crawler loaders. He took flying lessons, earned his pilot's license and bought a plane. He rode motorcycles and jet skis  One day, he dove into his pool and broke his neck. Afterwards, he was still Bill. Still a man who could make people laugh. Still a man everyone loved despite his limitations. He died too young from pneumonia.

There are other disabled people in my family.  Some have a profound hearing loss. Some have mobility issues. Some are greatly restricted by their disease.

Everyone is damaged in some way. There are no perfect specimens. Romance writers do dream up some mighty, incredible heroes, but in truth no one is immune from limitations. Even though Achilles was a hero he had that thing with his heel, and that's what defeated him.

From the day we're born we come with all kinds of built in boundaries such as congenital "defects" and genetic tendencies handed down to us by our predecessors. Over the years we endure traumatic events in childhood, which leave a mark forever in our psyches. Then there are illnesses, accidents, and finally the inevitable slide into the decay of old age which brings further limitations. Not a single human on this planet will not be disabled in some way sooner or later.

I believe the majority of people attempt to distance themselves from the disabled because they are afraid. They turn away--as if not seeing the victim will prevent them from enduring such a fate. Some folks are deliberately cruel and make fun of those who are noticeably different in their physical appearance or those who must use adaptive equipment such as wheelchairs.

Once, when my cousin was in the hospital for an infection, he told me one of the psychiatrists had asked him about depression. "As if I could jump out the window." Bill shook his head.

Some progress in accommodating the disabled has been made over the years. Buildings are now planned to allow wheelchair access. Sidewalks have ramps. Still, there is a lot more to do in making accommodations for those who are restricted in their movements.

Education is a key factor. It wasn't that long ago when children with Down's Syndrome were institutionalized, but now they work everywhere. Some have become movie stars and models.

We must not allow those in power to ignore the less fortunate.

Join the Facebook group No Longer Faceless or Voiceless for further discussion on this topic.
Posted by Penelope Marzec at 5/24/2017 11:35:00 AM No comments: 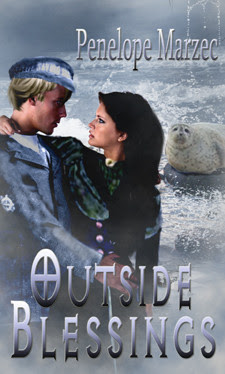 OUTSIDE BLESSINGS is a paranormal historical young adult story set in 1896, in New Jersey. The hero is a member of the U.S. Lifesaving Service. The heroine is seeking to clear her sister's name. Town officials believe her sister committed suicide and in those days, a suicide was not allowed to be buried in the hallowed ground of a graveyard.

Welcome to Blessings, N.J. .... a seaside town with dark and dangerous secrets. Neema wants to prove her sister was murdered, that she didn't commit suicide, but the murderer is still out there, still dangerous, and Neema could be the next victim if she asks too many questions. She has a secret, one she dare not divulge, even to Emmett, the young lifeguard she falls in love with. But Emmett has a secret of his own.

Until May 25, 2017, you have a chance to enter a sweepstakes for a free digital edition of OUTSIDE BLESSINGS!

All you have to do is go to:

And sign up! It's super simple. Amazon picks the winners. If you win, you claim your prize, download the book, and enjoy! 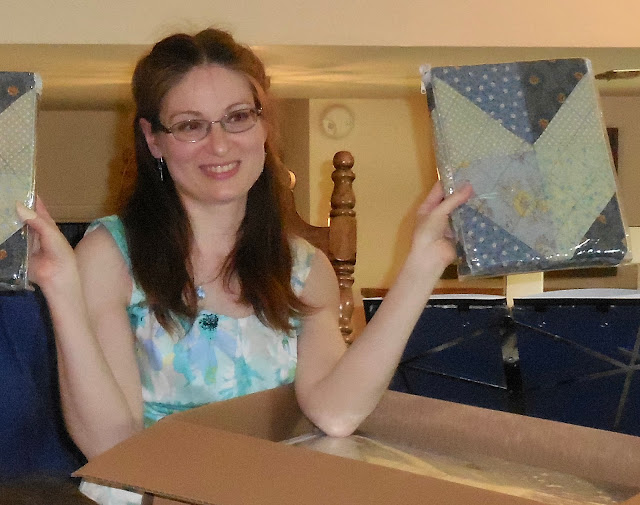 Daughter #1's bridal shower went well. I had planned an afternoon tea with finger sandwiches, but several guests brought extra food so we had more than enough for everyone to eat and plenty of leftovers. Everyone seemed to enjoy each other's company and conversations went on after all the gifts were opened. Best of all, Daughter #1 now has a wealth of household items to begin her married life.

I could feel myself getting emotional about the event as I watched her open gifts. The women oohhed and ahhhed when the contents of each box were revealed. Some made funny remarks and some noted which gifts were the most useful.

I recalled the bridal showers I hosted for both of my sisters years many, many years ago. I thought of the bridal showers given for me. I was lucky enough to have several--one hosted by my coworkers, one in Brooklyn with hubby's family, and then one hosted at my parents' house for friends. Back in those ancient times, bridal registries hadn't been invented yet. I wound up with three Crock-Pots. I kept two and gave one to my mother. I used my Crock-Pots quite a bit and a few years ago, Daughter #1 bought me a new, larger one, which I love.

One of the guests at Daughter #1's shower had gotten married around the same time as I did. She also got a Crock-Pot, but she claims she never used it. I was surprised because to me it's been one of the best appliances, but I do like to cook. I also like to try new recipes. However, I very much love to have to wash out only one pot when dinner is done.
🤗
Pushing the old memories to the back of my mind, I kept returning to check on things in the kitchen or busied myself by getting something for this guest or water for that guest. The time went quickly and soon the guests departed. I changed into my old jeans, put my feet up on a chair, and shared a bottle of beer with Daughter #2 who had the job of recording which guest brought what gift. It's a long list, and I am very grateful to all those who were so generous.

Life is made up of changes. This will be a big change, but a happy one. I can tell Daughter #1 that after forty years of marriage, I have few items left from my bridal showers. Still, while the sheets, towels, and appliances didn't last that long, love did--and that is the most important part of any marriage.
Posted by Penelope Marzec at 5/08/2017 11:15:00 AM No comments: 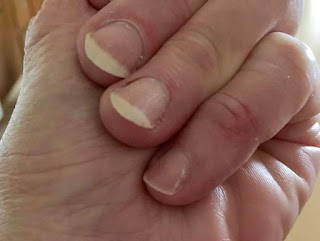 I decided I might try and grow my fingernails. I usually cut them down because if my nails are more than 1/16th of an inch long, they annoy me. I grew my fingernails once before when I was going to get married. I stopped playing the guitar a month beforehand. My fingernails looked lovely for the wedding and the photographer took a few photos of them. However, when it came time to select photos I opted for pictures that included more than just my fingernails.

Now Daughter #1 is getting married so I am the Mother-of-the-Bride. Impressive title--right? When I was shopping for my MOTB shoes, hubby saw fingernail polish that appeared to be nearly the same color of my dress. I bought it. When I got home I found out it was not the same color, but I put it on my fingernails anyway. Two coats. It annoyed me. I felt like I had weights on the tips of my fingers.

Today I decided to take it off. But my non-acetone polish remover was not very effective in removing the polish. I asked hubby if I could borrow his lacquer thinner. That worked much better than the polish remover. (Though you can still see bits of light blue in the photo.)

I searched online for methods of growing stronger nails, but I don't want to spend all my time obsessing over my fingernails. My fingers are always busy. I write, crochet, paint, cook, pull weeds, and do all sorts of chores.

Daughter #3 glues on fancy nails for special occasions. Maybe I should try that, too.