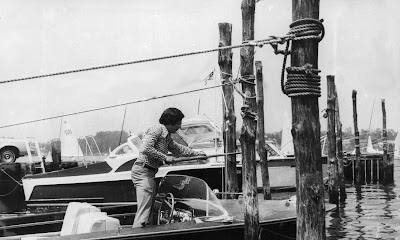 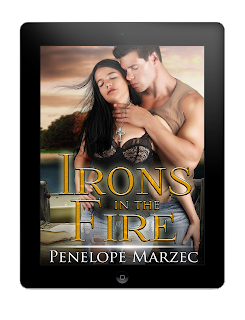 Hidden In The Reeds 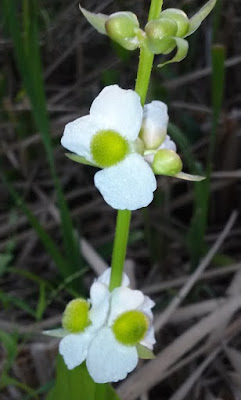 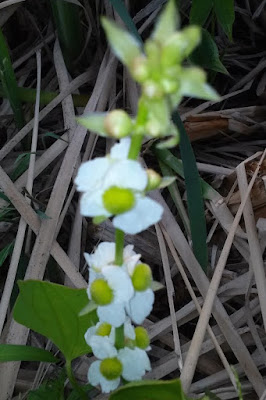 There's a small lake in Thompson Park named Marlu Lake. Sometimes hubby and I take his mother and my father to the lake just to sit for a while and watch the scenery. Sometimes there are Canadian geese floating around on the lake. Last week, we saw a whole family of swans. Often, there are kayakers paddling along on the water.

There were some very tall reeds growing at the edge on one side, but recently the reeds were cut down and I saw the white flowers pictured above. I didn't know what they were, but I am always curious to learn the names of things I don't know. After all, I might be able to use it in a story.

From what I gather, the plant is called Arrowhead. You can find more information about it at https://en.wikipedia.org/wiki/Sagittaria_latifolia

Another site (http://www.gpnc.org/arrowhea.htm) stated, "The corms were harvested by Native Americans (usually the women) in the fall.  They would feel around with their toes to locate and dislodge the tubers, which would float to the surface where they could be gathered.  Bitter when raw, they become quite tasty after cooking. For long periods of time when they were following the lower Columbia River in present-day Oregon, the Lewis and Clark expedition lived mainly on elk meat (which they killed themselves) and wapato purchased from the local tribes." 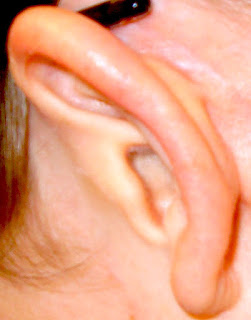 Each of us have five senses. Why would anyone dismiss one of those as being negligible? Yet, many people do when it comes to hearing. They don't want to wear a hearing aid because they are vain--or they don't want to pay for one because it's expensive. Of course, Medicare doesn't cover the expense. Obviously, the government thinks the loss of hearing isn't tragic.

But it is. A Johns Hopkins News Release stated, "The findings add to a growing list of health consequences associated with hearing loss, including increased risk of dementia, falls, hospitalizations, and diminished physical and mental health overall."

I have lived with hearing impaired people all my life. My father can't hear a thing without his hearing aid. His father, my grandfather also needed a hearing aid. My husband wears two hearing aids--but he is far better at figuring out songs by ear than I am. :-)

As some of our friends are aging, their hearing has diminished. Yet, they refuse to get hearing aids. Hubby was talking to one of his friends the other day. He asked his friend a question, but his friend didn't answer him. That's because he didn't hear the question, but he doesn't believe he has a problem and he doesn't want to get a hearing aid. :-(

Sometimes Even Editors Should Use a Dictionary 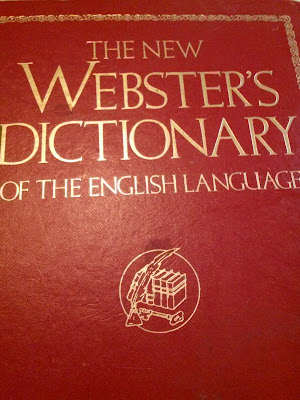 At the writers' meeting last Saturday, I chatted with some authors whose editors ask them to change words in their stories because those editors didn't know the word. I've had that happen to me. I have spent most of my life near water. Once an editor judging a contest complained about my use of the word bulkhead.

"What is that?" she wrote on the manuscript. (This was back in the old days of paper manuscripts.) This upset me because the word is in the dictionary and it's a very important word to know if you're living by an ocean or a river--where you will see a lot of bulkheads.

In the discussion on Saturday, one author noted that using the proper terminology is important to the book and especially pertinent to the setting of the book. The main characters would be aware of the names of things and places proper to that place--the vocabulary of the area.

When I wrote Daddy Wanted, my editor questioned me about my use of the word DUMBO. The book is set in New York City and everyone in New York City knows where DUMBO is. I've been to DUMBO. Wikipedia says, "Dumbo, also known as DUMBO, is a neighborhood in the New York City borough of Brooklyn. 'Dumbo' is an acronym for Down Under the Manhattan Bridge Overpass."

My editor lives in Canada, but she's a very good and reasonable editor. When I explained that DUMBO is the well-known name of a specific area in NYC, she allowed me to keep the word in the book.

Any editor has a tough job, which I don't envy. If there are 80,000 words in a book, the editor has to pore over each and every one of those words.

But sometimes, just like the rest of us, if an editor sees a word she doesn't know, she should look it up in the dictionary or on the internet. If the word is part of the jargon of a particular place, the word should stay in the book. At least, that's my opinion. :-)

I Signed a New Contract! 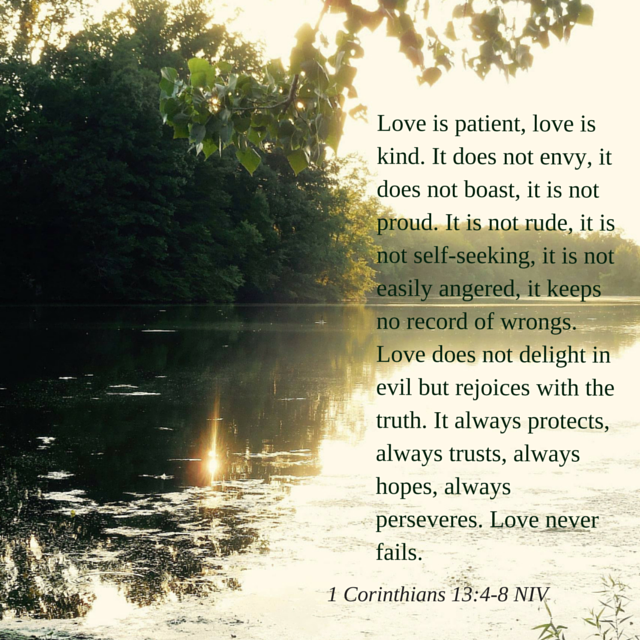 Prism Book Group is planning a new series based on 1 Corinthians 13:4-8. Each author is going to be responsible for illustrating one part of the verse. I proposed an idea for Love Always Hopes--and yesterday I received the contract. :-)

My story will be titled Hoping for Joy. The series will begin in February. I am so excited to be part of this new venture and I can't wait to read the other authors' stories, too.

Sweet and Short and Just Right 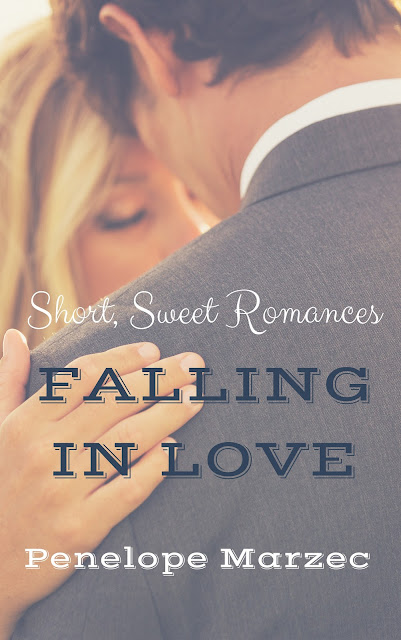 Need a dose of sweetness? You'll find it in this collection of short stories. I've gathered seven of my compact romances into a small ebook. Right now, this anthology is exclusive to Kindle and free for those who subscribe to Kindle Unlimited. For everyone else the price is $0.99, which should buy you a lighter heart and a smile. 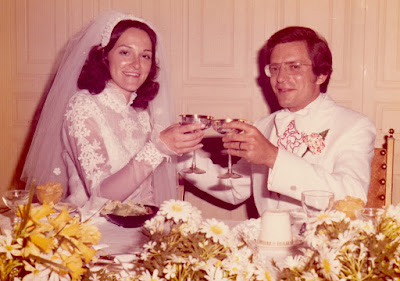 Thirty-nine years ago we were toasting our wedding at Diamond Jim's in Matawan. That reception hall is now gone, but we still make a good team. I hardly ate any of the prime rib we had chosen for our wedding feast. Actually, hubby was the one who favored the prime rib. Or was it Diamond Jim? He had a way of convincing us to get the most expensive things on the menu--like the cherry filling in the wedding cake. I would have been happy with lemon filling, but Diamond Jim assured me the guests would be horrified. I should put him in a novel somewhere. :-)

Actually, we hardly had any time to enjoy the party. The photographer was always ordering us around to pose here and there. The time flew.

But I remember our first dance. We swayed to Colour My World.

Then it was all over and we were off on our honeymoon. After that, it was thirty-nine very busy years of working, raising children, and now caring for elderly parents. Oh yes, and writing books and making music, too. It's been a blast! 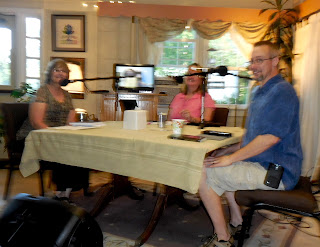 On Sunday night, I was invited to join Authors in the Round, a live radio show hosted by Karen Smith, president of Three Worlds Press. The show was broadcast from http://www.40footholestudio.com in Lanoka Harbor at the Murray Grove Retreat Center. It was a wonderful experience. Scott Wieczorek is on the right. He read excerpts from his latest book, Witness Through Time. Coming in via Skype was Sheri Velarde, who read excerpts from her book, Quest for Redemption. I read excerpts from both Patriot's Heart and Patriot's Pride.

We also discussed our backgrounds, writing habits, and the initial spark that started us on the path to authorship.

Hubby took the photo above so it's his fault that it's fuzzy. However, he also made a nice digital recording of my responses at the event which I put on a CD so my father can listen to it.

There were plenty of munchies to nibble on before the show and during the break. We had a live audience, too. And someone from Arizona called in to ask a question. How cool is that?