Coming Up for Air

Last night I finished the revisions for The Company You Keep, which is going to be reissued by Crescent Moon Press. Even though this book was published previously, there were lots of things to fix. For instance, in one spot I had used the word "say" when the correct word would have been "stay." There was even one spot where I used the wrong character's name! Horrors! These things do happen. The book has 84,000 words in it, and each one needs to be scrutinized. The editor said I had used some words too often--and she was right. (Hint: Everyone needs an editor.) But even editors miss errors. I've read plenty of published books where I found mistakes. But I don't want a single misprint in my own books.

I've spent the past month combing through this book--though the last two weeks were the most intensive. I ignored all my friends. I did not go anywhere--with the exception of trudging off to the real job every morning, going to Curves three times a week, and going to the supermarket. (Such is the glamorous life of an author.)

My house is very dusty. I am more than two years behind in organizing family photos. (I used to be on top of that.)

But today, the sun is shining here in New Jersey. I am going to enjoy it. Maybe I'll clean a bit, or put some photos in the album. Or maybe I'll read someone else's book. :^)

One of the Best Things I Ever Bought

This little CLEAN/DIRTY sign is a blessing. I have always known whether the dishes in the dishwasher are clean or dirty. However, hubby and my daughters have never been quite sure, it seems.

Now there is never a question. It is easy to tell at one glance if the dishes in the dishwasher are suitable for use--or ready to remove from the dishwasher and placed back in the cabinet. Hubby has surprised me a few times by doing this chore. Evidently, it makes him feel like a hero. :^)

It is also a snap to know when the dishwasher can be loaded with dirty dishes.

When I I woke up Saturday morning the thermometer on the porch hovered at nine degrees. The sun was so bright as its rays bounced off the thin layer of snow on the ground that I had to squint.

It would have been a great day to huddle in front of the computer and finish the revisions I need to do, but Nikoo and Jim McGoldrick were speaking at the New Jersey Romance Writers meeting so I dressed warmly and drove to Woodbridge.

Jim and Nikoo have written historicals using the pseudonym May McGoldrick and are now writing romantic suspense as Jan Coffey. They are a lovely couple!

They gave a presentation on setting goals and scheduling. Since they’ve written 27 books—while enduring a number of life crisis situations—I knew they probably had some great advice.

And they did. Toward the end of their talk, I divided up the number of pages I still have to revise by the days left before I must hand in the manuscript.

Jim and Nikoo asked me if I had allowed for the inevitable problems that come with life. Well, no I hadn’t. So I upped my daily page count to be sure my progress won’t get derailed in the event of an emergency.

Catherine Greenfeder, who works in Cranford invited me to speak to the students in the high school there who are interested in publishing. (That's Catherine on the right.) 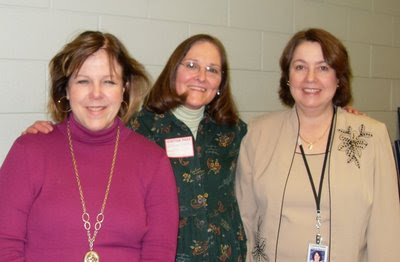 Today I gave my presentation on ebooks at Cranford High School and talked a bit about writing. The students had some great questions! Several of them are very serious--one is working on sci-fi novels and another on a historical non-fiction book.

I truly enjoyed spending the afternoon with such a dedicated group of young writers. I hope they succeed far beyond their dreams. :^) 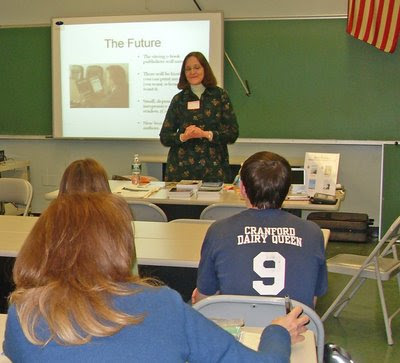