It has been a little over a year since I uploaded Prince of the Mist to the Kindle platform. Afterward, I uploaded the book to Smashwords for wider distribution. Finally, I struggled over the paper edition, which I uploaded to CreateSpace.

I designed the cover using a stock photo I purchased. It is eye-catching at 1" high, which helps. I have really been pleased at the response.

Here's a piece of cake for this momentous occasion! (Chocolate is good for you!) Enjoy. 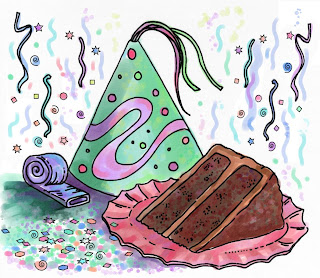 Above is the overview of the stats from my Facebook fan page. The graph goes up and down depending on whether I manage to snag someone's attention on the never-ending scroll of status messages in their news feed. It isn't easy and other people can have different results depending upon who their fans are. I do have fans who read my excerpts and enter my contests, but by far the overwhelming favorite topic on my fan page is food.

My fans like to look at food--though not usually the food I have prepared at home. I snapped a photo of my sausage biscuit in a fast food restaurant one day and was amazed that people found it so interesting. Yes, it was tasty but really there wasn't anything unique about it. I took a photo of my fried shrimp at the Lobsterfest and lots of people looked at that. I know there are people who claim to hate reading about what anyone had for supper, but people on Facebook sure are interested in looking at a photo of it--add the recipe and it's even better.

I try to include photos or videos with every post. I don't have an amazing number of fans like Diana Gabaldon (one of Daughter #1's favorite authors). Diana Gabaldon doesn't post photos with every status message on her fan page, but it doesn't matter. For me, it matters.

Flowers and gardening seem to be a big hit, which is a problem for me because I do not have a green thumb. My luck with plants is abysmal. This is embarrassing since my sister is a horticulturist. She is always searching for plants for me that I can't kill. Still, I have taken some nice photos and my fans apparently appreciate the pictures. They can commiserate with me when the deer eat my plants. They can give me advice about what deer might not eat.

Yes, my fans enjoy giving me advice. It's okay. I can always use it. Especially when it comes to gardening.

I'm not terrific when it comes to decorating either. So when I put up a photo of the lampshades I bought that did not look right, I received a wealth of suggestions.

When I dropped my favorite Corningware roasting pan, I got a lot of sympathy. Evidently, there are those who can relate to my klutziness.

Losing weight is a great topic, too.

My fans do look at photos of my artwork, an area where I do have some skill. I get lots of compliments, which sort of makes up for the posts about my klutziness. 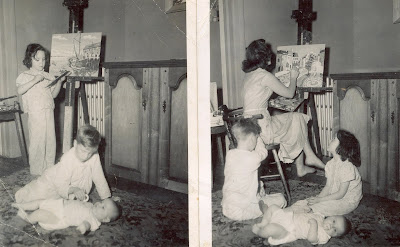 There's me on the left, mixing paints, which is something I still love to do. My brother is sitting on the floor with my sister. In the photo on the right, my mother is at the easel.

It is now three years since Mom passed away. Today is the anniversary of that loss. Mom is still missed, but I consider myself very lucky to have had such a wonderful mother. Mom stayed home to raise us. Yes, the majority of mothers were stay-at-home moms during that era, but my mother put her heart and soul into the job. Nurturing came first.

Still, she never gave up her art. Often, she would paint late at night. Later, when everyone had grown up, she had more time to devote to her passion. For a look at some of her work go to this post:

No matter how important her art was to her, when someone needed her, she was there. She did the right thing and gave out the best advice. Always.

I wish I could use my cellphone to give her a call. :^(

I noticed something new on the Barnes & Noble website when I went to check out the status of my books. There's a clever little icon on the bottom right corner of my newer books, a small blue arrow with the words, "Read instantly." It reminded me of Alice and the bottle that said, "Drink me." The arrow intends to entice readers to open the book right away and begin reading a sample.

It worked for me. I checked my own books and then I went and checked out a whole bunch of other books. This could be dangerous. My to-be-read stash of books has been out of hand for a long, long time.

There is one glitch. The cute little blue arrow does not work with older browsers. While that does not matter because anyone can download a free sample, the instant gratification of reading a sample with one click makes it so much more satisfying and you can be assured that you will not wind up ten inches high as Alice did.

I believe all of us need to know certain Life Skills. I taught my daughters to cook, do laundry, and clean toilet bowls. They met other students in college who did not know these things.

On my list, Life Skill #34A is changing a flat tire. I was reminded of this particular skill on Friday night. Daughter #1 went out with a friend and at the end of the evening, her friend discovered she had a flat tire on her car.

Everyone who owns a car should know how to change a tire. It's easy to use a cellphone to call a road service, but it might take a while for help to arrive. If you are in a cold place, waiting might not be a good idea. Also remember that cellphone batteries sometimes fail at critical times and that often flat tires happen in places where there are no cell towers, pay phones, or other people.

When our daughters bought their first cars, hubby taught them how to change the tire. A young woman should never expect a hunky hero to be nearby. It would be nice, but in real life it doesn't always work out that way.

I know this because it happened to me.

Once, I had to change a flat tire while it was snowing on a dark lonely interstate in February. Cellphones had not been invented yet and I did not have a CB radio either. Fortunately, I was not alone. I had my mother, my youngest sister and my friend with me. We had been visiting my other sister in a hospital in Scranton.

By the time we headed for home, it was dark and snow was falling. I drove slower because the road had become icy.

On a lonely stretch of Interstate 380, the car pulled to the right as one tire went flat. I had flares, which I lit. I got out the tools, the spare, and the jack. My younger sister held the flashlight. I took off the hubcap and handed it to my friend for safe keeping so we didn't lose it in the thickly falling snow.

A few eighteen wheelers passed us. We did not see a single patrol car.

I had gotten the wheels balanced a few day before the trip and the lug nuts were on so tight that it took both my mother and I to loosen them. As we removed each one them, we placed them in the hubcap which my friend held.

The snow continued to fall. We put on spare in about twenty minutes--just as the flares sputtered out.

As soon as we got rolling again, I turned up the heat. We could have turned into icicles if we had stayed in the cold much longer. 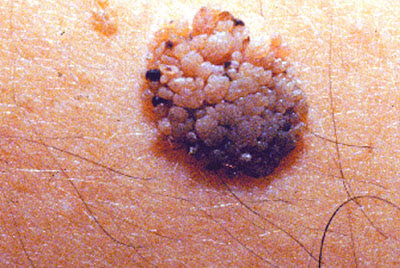 Years ago, when hubby had a boat. He used to put a special paint on the bottom to prevent barnacles--the real ones. Can barnacles be prevented on people? Hmmm?
Posted by Penelope Marzec at 7/13/2012 10:16:00 AM 1 comment: 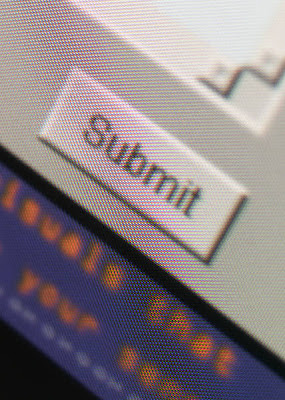 I spent quite a bit of time yesterday working on my new website. It is plain and simple, which is the way I generally like things to be. Less is more is most matters--although I haven't been able to apply that principle to my collection of books. :^(

I used a free Weebly site and forwarded my domain name to it. So anyone can type in penelopemarzec.com and wind up at penelopemarzec.weebly.com. (I love the magical internet.)

I intend to add more stuff like links or banners in the future. For now it has all the important information, which is mainly my books and links to each of them. There's a contest and a contact form, too. So go ahead and sign up for the contest! What have you got to lose. 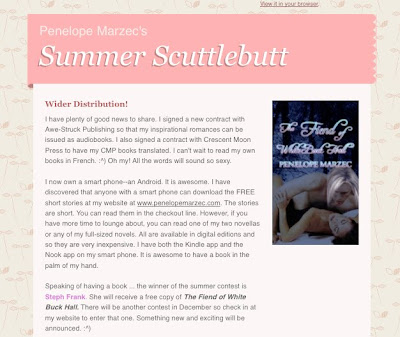 Here's a view of the newsletter I send out sporadically to my fans using MailChimp. If you go to Summer Scuttlebutt you can read the entire newsletter, which includes a recipe for Lemon Bars that you won't want to miss. (It's easy, quick, and so delicious!)

If you would like to receive the next newsletter go to the contact page at my website HERE. In the comment section write NEWSLETTER. That's all you have to do. Then the next time I send out a newsletter, you'll get one. I don't send out a newsletter very often, so you won't have a cluttered email inbox on my account. :^) However, if you would enjoy hearing from me on a daily basis, LIKE my Facebook fan page at www.facebook.com/penelopemarzecbooks Right now I have a lovely photo of the blizzard of 2010 there--maybe it will cool you off. :^)
Posted by Penelope Marzec at 7/02/2012 09:44:00 AM 2 comments: