Required Reading for All 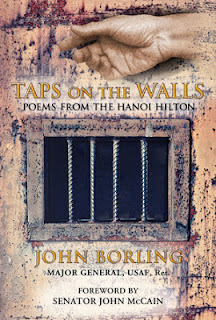 In yesterday's New York Times I saw an article "On Keeping On," by Bill Keller, an op-ed columnist. He wrote about a book of poems Taps on the Walls: Poems From the Hanoi Hilton by John Borling who was a prisoner of war for six and a half years in the infamous North Vietnamese prisoner of war camp known as the Hanoi Hilton. With no pencil and no paper, John Borling found a way to keep his mind active and entertain his fellow prisoners using a code. He tapped out poems and messages. He memorized the poems and when he was finally freed, he recorded them.

Now, forty years later, the poems have been compiled into a book. Late last night, I downloaded the book--and then I could not get to sleep. The poems are haunting and proof of the incredible strength of the human spirit.

Labels: John Borling, Taps on the Walls: Poems from the Hanoi Hilton

I Wrote Myself into a Corner! 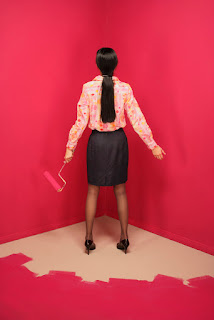 The New Jersey Romance Writers' #JeRoWriMo Challenge has been great! In three weeks I have pumped out a total of 23,193 words. Everything was moving along so well until two days ago when I realized I had written myself into a corner--and there was no easy way out. :^(

There's plenty of advice online, but I found Ken Levine's suggestions useful for me. I went back, added a scene and put a note in the beginning of the story where I need to add information when I return to edit the rough draft.

The most important thing to remember is that what I have IS a rough draft. I will have to layer in more emotion, more sensory detail, and take out redundant phrases along with tired old words the second time around.

Nevertheless, I am happy with what has been happening in the story. It has been fun! I think I'll try the writing challenge next year, too.

Labels: #JeRoWriMo, writing challenge, writing myself into a corner 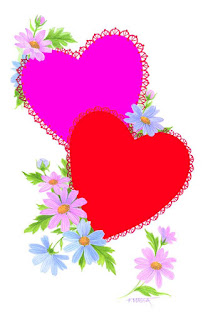 
He touched her shoulder as she stood grinning up at him,
and strands of her honey-colored hair fell across his knuckles.
He wondered how many nights Samantha had fallen asleep
next to the microscope. How many lonely evenings had she
spent in this god-forsaken wasteland when she had all the
sweet goodness of the sunshine glowing from within her?

His hand went from her shoulder to cup her chin. Her
tender lips drew him, and before he realized it, he tasted her
and found the warmth of the sun along with the nectar of
summer wildflowers in her kiss. Somehow, he had known it
would be special, like her. He had never met a woman quite
as unique as Samantha Lyons.

He came to his senses when a stray mosquito landed on
him, intent on drawing blood. As he slapped the annoying
bug, he drew back and saw shock engraved on Samantha's
face. A flaming blush blooming on her cheeks made her only
lovelier, and he bent towards her again.

Then she rushed out the door and hurried across the yard.

David watched her enter the cottage. He frowned as his
mouth turned as dry as all those grains of sand on the beach.
Realization slammed into him like a direct hit on the solar
plexus. He swept his hand over his face. In a moment of
weakness, he had let his guard down. Would Samantha
dismiss him as coldly as she had the unfortunate Ginger?

He had to stay here! Right now everything hung in the
balance, and he had to keep James safe. Nothing mattered
more than that.

David ran his hand through his hair and paced the floor.
How could he have done this? His shoulders drooped as he
reasoned that any man would have attempted the same
thing. She had looked so luscious, like a peach ripe for the
harvest. He licked his lips and still tasted her flavor there.

A dull ache, like that from an old wound, gnawed at him.
How could he have forgotten that he wasn't just any man?
Right now, he was a criminal. Samantha had only to pick up
the phone and call the nearest police station.

Bleakly, he knew the truth was that he had been a little
bored after one week and went asking for trouble.
Furthermore, he had gotten it, risking his own son's future.
What kind of father was he? Would he never learn? 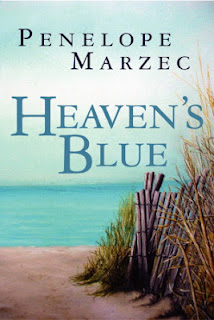 A Kiss--from SEA OF HOPE 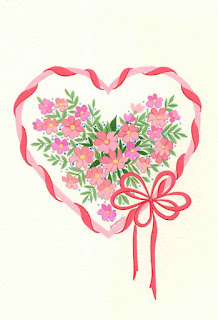 With Valentine's Day only two days from now, I thought it might be appropriate to treat everyone to a kiss from SEA OF HOPE, my EPPIE Award-Winning book.

He had grown so fond of her that it hurt him now to think of them each going their separate ways. Yet, it had to be that way. He had no future.

A hollow emptiness spread inside him. Doria had come into his life like a hurricane, but at her center he found strength, loyalty, and true courage.

She stirred. Her eyes opened slowly, vague from slumber.

"Hey," she said and lowered her eyelids again, fanning the dark brown lashes on her cheeks. She sighed and smiled.

Two creases formed between her brows, marring her smooth complexion. Then her eyes flew open.

"What?" She ran her hand through her wild ringlets and moved to sit up.

"Everything's fine," Murray assured her. "We're docked in New York, waiting to unload the porgies. And the storm decided to move up to New England."

Doria flopped back down on the bunk. "You look good."

"Like I could sleep for another decade," she replied.

Murray lifted up his digital thermometer. "Do you mind?"

Doria looked at him suspiciously. "I'm not sick."

"So were you." She pulled the covers up higher, under her chin. "And you nearly drowned."

"I already checked my own temperature." He grinned. "After a half dozen cups of hot coffee, I am almost normal."

"Too much coffee is bad for you." She glared.

"If you have hypothermia, it can work wonders," he countered. He turned on the thermometer. "This is not an invasive procedure. I put this in your ear and it gives a readout in seconds."

"I know how it works," she huffed.

"Your fingers are still blue," he mentioned.

When she looked down at her fingers, he placed the thermometer in her ear. She tensed.

"Can I talk?" she whispered.

"Yes," he whispered back.

Regret weighed down on him. He had misjudged her at first, and hurt her.

"I'm glad you didn't let me drown." He found himself straining to keep his voice level. He took the thermometer out of her ear and glanced at the readout.

"We have got to get some hot drinks in you," he stated as he frowned at the numbers.

"Nurses talk like that all the time." He shrugged. "I'm pretending I'm a nurse."

Doria laughed. "You look so much more like a pirate."

He bent his head and stared at the floor, letting her merriment warm him with waves of happiness. It felt good. Healing. He had wanted to see her smile, to make her laugh, and he finally had succeeded. But why did it leave him with a lump in his throat? With an effort, he lifted his head.

"You will always look like an angel to me, Doria Hanrahan." He could barely hide the emotion in his voice. "Thanks for saving my life."

She placed her hand on his. He tightened his fingers around hers.

"I would have saved anybody." Sincerity rang through every word. "Even George."

This time Murray had to laugh. "Should I let George know that?"

She gave him a puzzled expression and then pouted. "You know what I mean."

The delicate moue formed by her lips drew him. He dropped the thermometer on the blanket and reached out to cup her chin in his hand. Her eyes, the color of bittersweet chocolate, widened in surprise.

His lips came down on hers, slow and gentle. The tender fullness of her mouth had him drowning again, but this time from the forgiveness he found in her response.

He pulled away. Though brief, the kiss left his heart ramming against his rib cage.

"Why-why did you do that?" she asked, her lips still moist and rosy.

He shrugged and traced the generous curve of her mouth. "It's part of the prescription."

Her cheeks flushed even as she glared at him. "You made that up."

"I bet your temperature rose a few degrees." He lifted up the thermometer again. "Shall I check?"

"No!" She threw the blankets over her head.


FIND OUT MORE AT AMAZ 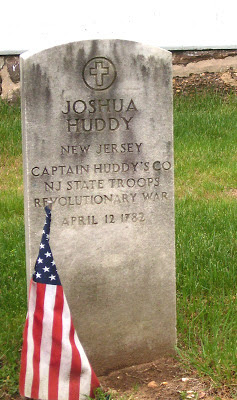 I am participating in JeRoWriMo--the New Jersey Romance Writers answer to NaNoWriMo. NaNoWriMo is held every year in November. I've never attempted it because Thanksgiving is in November and I am responsible for the big family dinner--along with the accompanying house guests. In addition, with Christmas looming ahead and all the hoopla that holiday involves I know I would be doomed to fail if I set a plan in motion to focus on writing.

But February's big holiday is Valentine's Day, which need not involve much preparation. February is usually cold and sometimes snowy, the type of weather I consider perfect for writing. So this year I decided to sign up for JeRoWriMo. So far I've added a total of 4374 words to my work in progress. The goal is 30,000. I don't know if I will make it that far, but I am thrilled with my current word count.

Nancy Herkness organized NJRW's writing challenge and cheers on all the participants. The group is not too big, which is a bonus. For the most part, we know each other from our meetings. (It is only open to those who are members of NJRW.)

I am staying focused on my writing and looking forward to finishing my book. It's been fun! 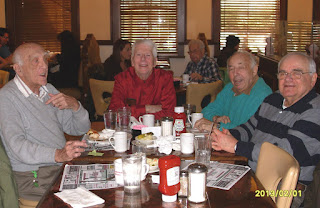 Four former editors from the Jersey Journal gathered together for lunch yesterday. They usually get together at least once a year. Dad, the oldest of the quartet, is on the left, Marty to his right, then Milty, and Arnie. They started off by bemoaning the loss of yet another daily newspaper, The Times-Picayune. They talked about old times at the Journal and the people they knew. 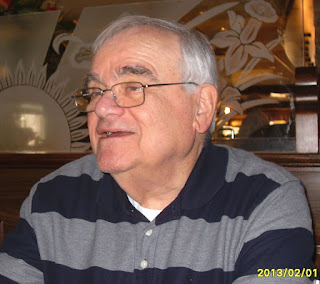 Arnie said my father was one of two reporters he knew who actually resembled Hollywood's version of a newspaperman. :^) 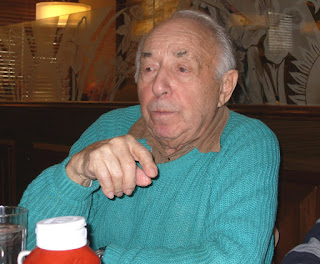 Miltie is going to be 90 in May. He does not wear glasses and has good hearing. However, he doesn't write anymore and neither do the others. They talked about one journalist they all remembered who typed faster than anyone. 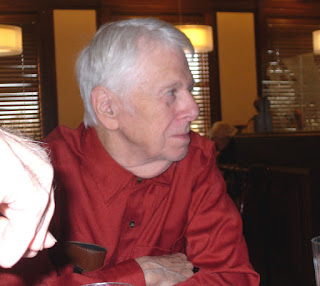 Marty still has an electric typewriter. Like the others, he has an email address, but none of them--except for Dad are on Facebook.

I had a great time listening to their stories. They made the life of a newspaperman sound very exciting. :^)