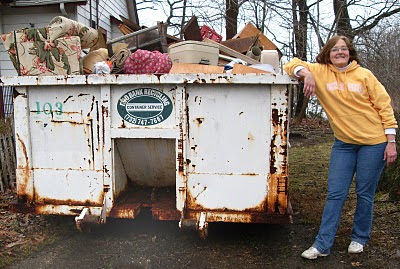 We had to resort to renting a dumpster to clean out the house where I grew up. Yes, there's the loveseat on the left and right on the top is the port-a-potty Mom and Dad used while camping. There's a small bookcase (we never had enough of those), some plywood panels of various sizes, a worn comforter, a rug, and a frame.

Before my mother died, we had an auctioneer take some of the stuff. After Mom died, we had the Salvation Army take some of the furniture. We made countless trips to donate stuff to Goodwill. Up until Dad broke his hip, he constantly filled up the trash cans with extraneous items he knew he would not need in his small apartment. But he moved into that house fifty-six years ago and in the interim, filled it up with lots of happy memories--and plenty of things. Mom was a prolific artist, so we all have the paintings she left behind. However, there was were also Dad's many tools. (Dad wanted to take his circular power saw to the apartment. I nixed that idea.) He a collection of old portable radios, assorted wires, and a host of ancient audio tapes. Too much stuff!

Fortunately, we had help in cleaning out the house. It is just too difficult to toss memories into a dumpster. I did retrieve one thing from the dumpster--but only one. And though the job is done, it is still sad to look at this photo.

Labels: cleaning out the house, dumpster 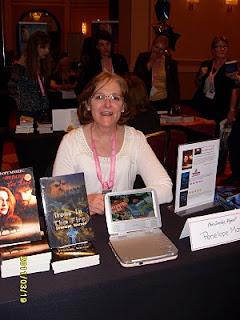 I had a great time at the Liberty States Fiction Writers Conference today. This was only the second conference run by LSFW, but it was awesome! The workshops were great and there were top-notch editors and agents, too.

KISS OF BLARNEY Available for the Kindle Today! 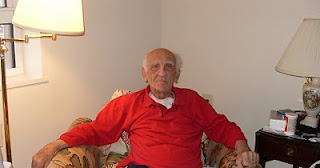 Dad is now living in a small apartment. We made the big move on Monday, but there are still things in the house that we must either donate, recycle, or throw out. It's going to take quite a while to go through everything.

However, the apartment--furnished with the bare essentials--is comfortable and with the addition of my mother's paintings, it does look homey. Dad will be getting physical therapy for a while and he'll have a home health aide, too. After two and a half months in the hospital, he still has a long way to go in regaining his strength. Nevertheless, his appetite has definitely improved. Daughter #1 made rice pudding on Sunday and Dad had three helpings of it on Monday after dinner.

Tonight we took Dad out for pizza. He only had one slice, but he downed a bottle of stout, too, and he intended to have dessert once he returned to the apartment. Dad has always had room for dessert. :^)
Posted by Penelope Marzec at 3/10/2011 08:04:00 PM 2 comments:

There's another writers' conference coming up--the Liberty States Fiction Writers will be gathering to listen to MaryJanice Davidson and a host of other well-known fiction writers who are more than willing to give away their secrets of success.

I plan to be there and I intend to bring along my books in case anyone wants to buy some. I will also bring along my promotional handouts. Lots of writers buy pens to hand out, some buy little sticky notes, or bookmarks.

My handouts are rather simple. I used trifold brochure paper and set Word for three columns. One one side, I put the cover, the blurb, and some other information. Inside I squeeze in an excerpt from the book. 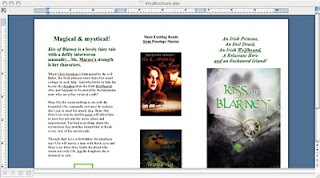 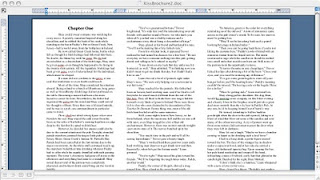 That's the easy part. The trick is to get the other writers at the conference to pick these things up. At the last conference, I attached a Twizzler to each brochure. Every single brochure disappeared from the table.

But my latest book has an Irish theme. What sort of candy should I attach for this one? Peppermint Patties?
Posted by Penelope Marzec at 3/04/2011 08:40:00 AM 4 comments: