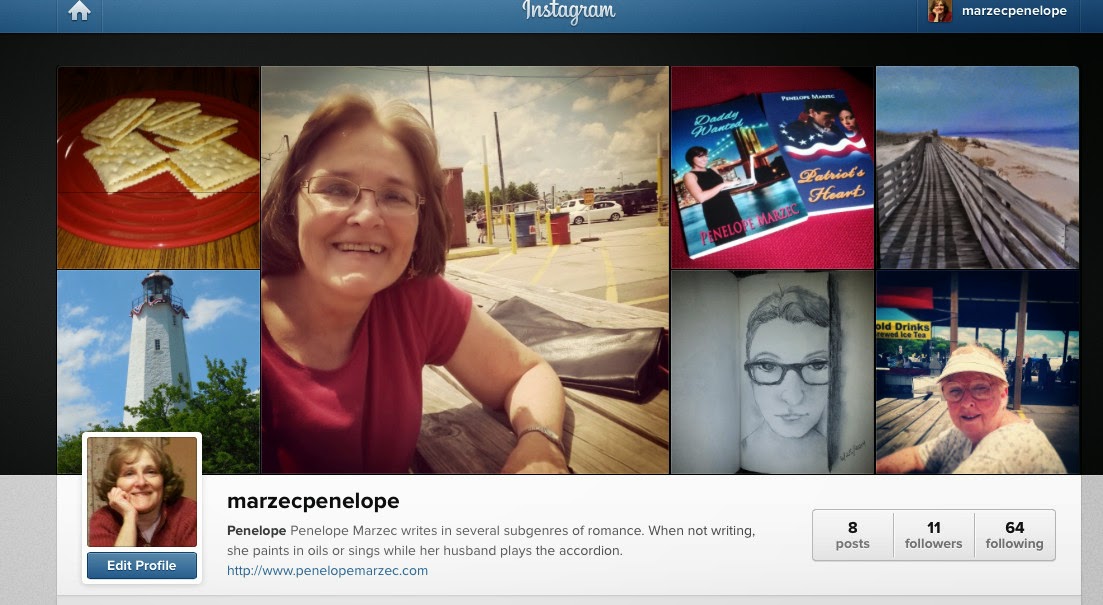 I joined Instagram. One of my painting friends in Grace Graupe-Pillard's painting workshop, told me how much she enjoys Instagram. She had set a goal for herself of doing a sketch a day, which she would post on Instagram each day. Using Instagram, she inspired herself to continue sketching and posting her sketches. She enjoyed the ease of that particular network. She collected followers and likes from people from all over the world.

Since I already belong to Pinterest, I thought joining Instagram would be redundant, but eventually my curiosity got the better of me and I signed up. I did one sketch of Daughter #2, posted one of my paintings, and some photos. But, of course, the lure of any social network is followers.

I started exploring. I found plenty of my author friends. :-) But there are photographers, too, and artists, and some very clever people who do amazing things with their Instagram account. Breathtaking stuff.

In addition, Instagram offers various filters along with editing software to enhance photos. Therein lies some of Instagram's magic. An ordinary photo can become an extraordinary photo layered with emotion.

Can you throw out your precious words? 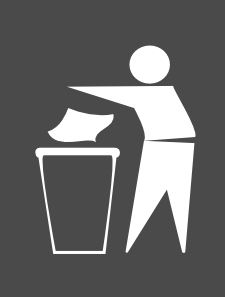 We all digress. That's why authors need editors. Long before I hand my manuscript over to an editor, I find sentences, phrases, even whole paragraphs that need to be cut. Sometimes, entire pages become useless. If I don't cut those unnecessary passages, the editor surely will.

Writing is all about rewriting. Focus and clarity form a stronger book, creating a story that will hook readers and keep them turning the pages. It doesn't matter whether a manuscript is 60,000 words long or 100,000. Authors need to avoid going off on a tangent. Every scene should advance the plot.

There are some authors who have digressed, including long passages in their manuscripts that they could have left out. For instance, Victor Hugo in Les Miserables really should have written a separate nonfiction book about the sewers of Paris. :-)

I tend to wander away from the plot, too. It's easy to do, especially since I love writing narrative.

Since I hate to toss out my precious bon mots, I make up a special document for them. Each of my books has a corresponding file labeled SCRAPS. As I trim my manuscript, I cut out the parts I don't really need and paste them into my scrap document. There they remain, safe and sound.

Often, after the book is published, I'll go back and revisit the scraps I saved. I'll have a good laugh and delete the file.

Not every word is precious. 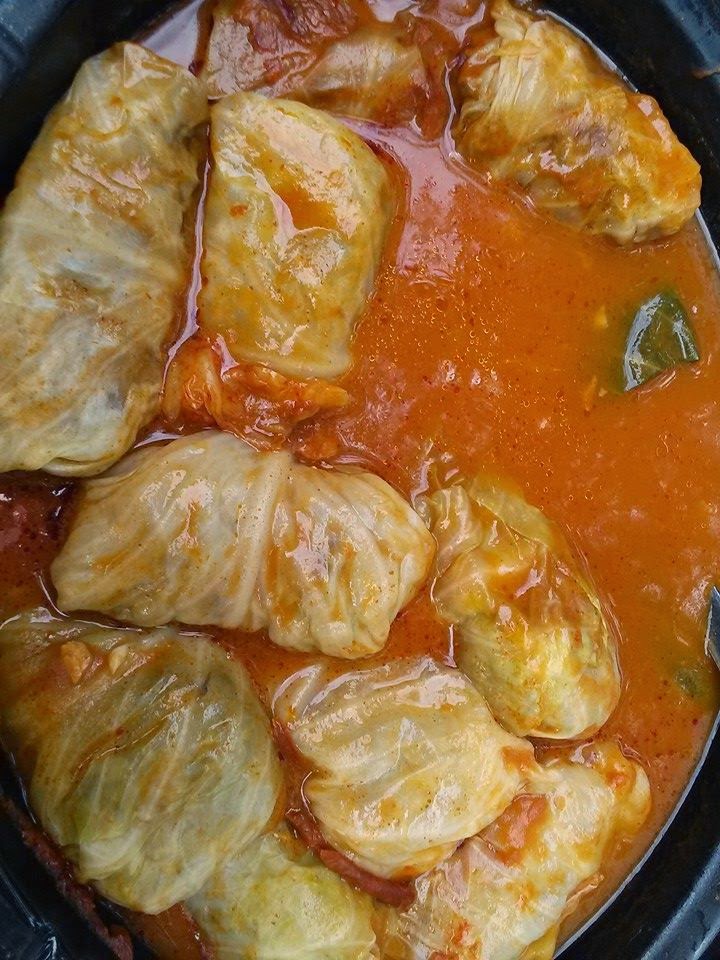 I didn't write last weekend. Instead, I made stuffed cabbage. My mother used to call stuffed cabbage halupki, but hubby's family calls them gowumpki, which is actually spelled golabki. In Polish the l  has a slash through it indicating that it should be pronounced as a w. No matter which language you use, it's the same thing.

My mother never gave me the recipe for her halupki because she didn't have one. She told me she had to feel the mixture to be sure it had the correct proportions of rice and meat. However, she did teach me how to boil the cabbage and peel the leaves off the head carefully and in one piece.

When hubby and I were married, his mother gave me a Polish cookbook immediately. I suppose she didn't want her son to starve to death. The stuffed cabbage recipe in that book is quite similar to the one my mother made, so I've used it over and over again. However, making stuffed cabbage involves a lot of time and effort, so it's rare that I set aside the time to do it. But since we celebrated Father's Day, I thought the special meal would be appreciated--and it was.

Of course, now that I have a larger slow cooker, one part of the task is much simpler because once all the cabbage rolls are prepared, I put them in the slow cooker and forget about them until it's time to eat.

Since there are hundreds of recipes on the web for stuffed cabbage, I am not going to include mine here. Everybody does something different. Some precook the rice, some don't. Some add lots of spices and some don't. Some add eggs. Some use tomato soup for the sauce, some use beef broth.

There's a great deal of variety. Check out the recipes online and you'll see what I mean. Pick the one you like.

I put together a huge batch of stuffed cabbage. We are still eating them and nobody is complaining.

I should be able to snatch more time for writing today since I don't have to worry about what's for supper. :-) 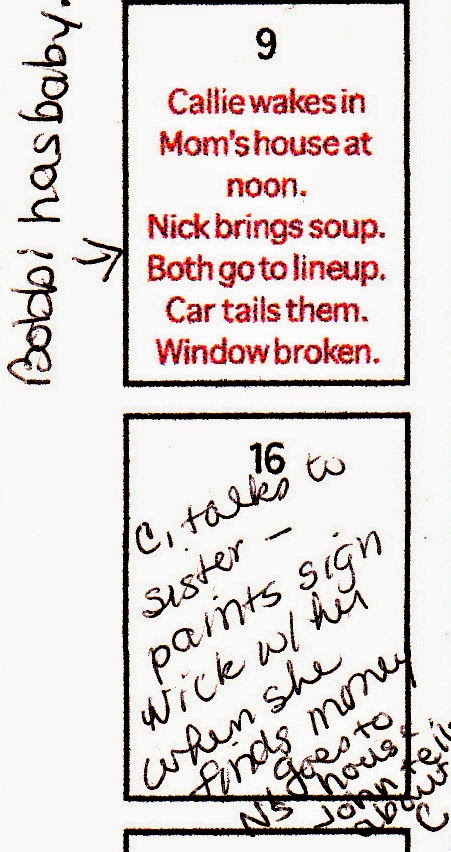 This is a detail from the calendar I used when I wrote A RUSH OF LIGHT. I started off being neat and typing in the scenes. Then, as I built up momentum, I started scribbling in the details and using initials, because sometimes I write by the seat of my pants. :-) For me, using a calendar to sketch in scenes is essential. I cannot write without a calendar. It keeps me organized.

I make up my own calendars in Word using ordinary 8 1/2 x 11 size paper. I still have plenty of scribbling room if I write small. Here's the one I made for my current WIP, reduced in size to fit nicely into this post. 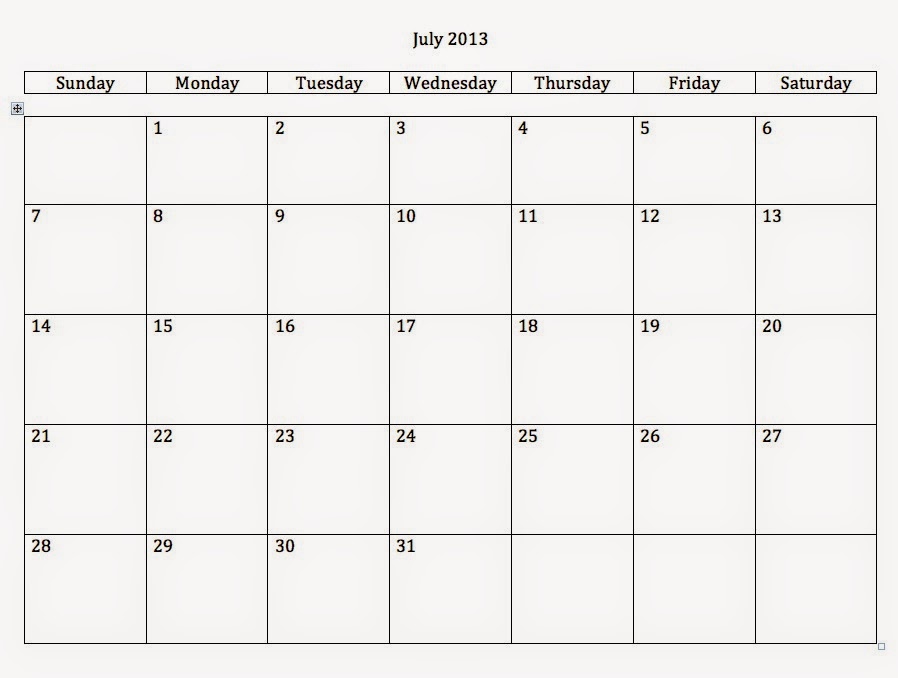 Of course, I could use two sheets of paper and make a bigger calendar, or use bigger paper, but this works for me. When the book is finished, I have a very basic outline of what happened and when. It is useful when writing a synopsis.

I cannot guarantee this method would work for every writer, because nearly every writer seems to have a different approach. In the end, it's not about how a writer got the job done. All that matters is a finished manuscript and a good story.

You can watch the book video for A RUSH OF LIGHT below.

Many, many years ago, there was a Giant Slide at the Keansburg Amusement Park. It was huge--very tall and very wide. I haven't seen any other dry slide in the area quite that big. Eventually, it was taken down, but we got to enjoy it for a little while while our daughters were young.

At first, I was terrified getting onto that slide. Gravity pulled me down faster as I neared the bottom and on the last few hills, I was actually airborne.  Hubby loved it, but he likes roller coasters, too. However, after a few successful runs, I became used to the Giant Slide. I conquered my fear and learned to enjoy the ride.

I could make up analogies comparing the Giant Slide to life or to writing--but I won't. The ride was exhilarating once I figured out I wouldn't get hurt. I felt stronger for having overcome my apprehension.

But I still refuse to go on a roller coaster.

How about you? What amusement rides terrify you?

I can't say it was easy to read. The characters and the plot are too contrived. The hero was such a rat, I had a tough time believing he would ever turn around. Since the story is told through letters Pamela has written to her parents, it is also difficult to believe she had so much time to write everything down, in minute detail, including conversations. Pamela does go through quite an ordeal and her firm moral beliefs and religious faith buoy her up through her hardships.

For the book's historical significance, this was an intriguing read, a look backward into time, and for that reason I recommend it.
Posted by Penelope Marzec at 6/06/2014 10:10:00 AM No comments: 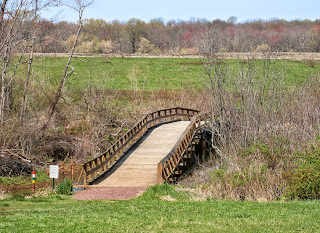 When I started doing research for PATRIOT'S HEART, I discovered American patriots were offered one hundred acres for their service when they signed up for the Continental Army. Unfortunately, not all received their reward. There is an interesting chronology of the inducements offered for service at http://www.slpl.lib.mo.us/libsrc/benefits.htm. Joseph Martin wrote about his time in the Continental Army and there's an in-depth review of a book about his memoirs at http://www.miwsr.com/michiganwarstudiesreview/2009/20090105.asp which includes the mention of those elusive one hundred acres.

Blacksmiths were exempt from service during the Revolution, but the heroine's father in PATRIOT'S HEART longs for the promised one hundred acres. So Agnes, the heroine of the story, runs the forge in his absence.

You can read an excerpt from the story at http://prismbookgroup.com/PatriotsHeart.html

Would you have signed up to serve in the Continental Army with the offer of one hundred acres?