A Visual Trail of Delight 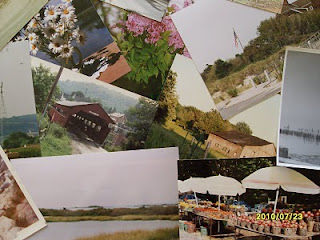 It has been a year since my mother died. This week I finally decided to go through the large bin of my mother's photographs. I picked out the pictures Ma had taken of my husband, our daughters and me. My sisters have to go through the bin and pick out what they wish to keep, too.

There are a lot of photos of scenery. My mother's passion was painting. She started out in oils and later switched to watercolors. A prolific artist, she was always searching for a new scene to capture so that she could paint it later. There are photographs of old barns, covered bridges, flowers, seascapes, pastoral farm scenes, and the overflowing abundance of a harvest of fruit.

Few of the photos are labeled though I do recognize some of the locations. There are hundreds of these photographs. Each one is a project my mother did not get a chance to complete, which is a rather depressing way to think of the situation. The fact is that each picture also represents the hope she had to do more.

My mother loved to paint. It gave her joy. Each photograph holds a spark of excitement that I can almost feel as I hold the picture in my hand. It's like I'm looking through the lens and getting that little tickle inside telling me this is going to be fun.

My mother left a wonderful legacy behind her, a visual trail of the delight she experienced in God's beautiful world.
Posted by Penelope Marzec at 7/24/2010 10:19:00 AM 1 comment:

Out of the Frying Pan, Into the Fire 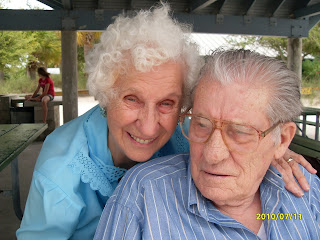 New Jersey was enduring a record heat wave when we packed up for our annual road trip to Florida to see hubby’s parents. We did not know what to expect this year. Hubby had flown down a few times by himself this past year to help his parents. His father had broken his hip last September and needed constant nursing care. By February, hubby had arranged for his parents to move into an assisted living facility. His mother resisted the idea of leaving her house, but hubby insisted and she grudgingly went. Once his parents were both safely installed in their new apartment, we assumed life would be easier.

However, Mom was not happy. While she admitted that the food provided at the facility was good, that was the only thing she seemed to appreciate. With every phone call, she reminded us to get out our black suits. If hubby called the head nurse to ask about his parents, his mother became very angry with us for going behind her back.

Still, we knew the staff handled many tasks that had become difficult for Mom. They bathed Dad and gave him his medicine, they made doctor’s appointments and, of course, transportation to the doctor was provided.

The facility also provides many excursions along with entertainment programs, but Mom told us she did not participate in those. She and Dad ate in the dining room, but spent the rest of the day in their room watching television.

She expected us to stay in her old house. But there isn’t any wi-fi there—or television. Besides, the hotel was closer to the assisted care facility where Mom and Dad are now.

We were relieved when we arrived and saw Mom and Dad looking good, well-fed, clean and well-dressed. Though Dad can barely hear, his vision isn’t good, and he’s not really attentive most of the time—there are those moments when he is much like he’s always been—a big tease.:^)

Hubby talked with the head nurse. I drove Mom to the mall so she could buy new shoes.

Hubby discovered that his father is simply very aged. I found out that Mom still has plenty of energy but she frequently contradicts herself.

Our biggest mistake was to agree to take Mom to the house. She wanted us to look it over and see if it is in need of a new paint job before it is put on the market.

Also, we were supposed to be the cleaning crew.

I expected emotion. Mom cried. I got choked up, too. After all, we brought our daughters down every summer and we had some good times in that house.

But then Mom opened the door to air out the house. In Florida--in July--airing out the house means letting in all the humidity and heat. I vacuumed all the rugs as sweat ran down my face. Hubby helped Mom clean all the mirrors.

Hubby and I do not think the house needs to be repainted. However, when hubby turned the water on, I heard the toilet running. The valve needed to be replaced.

Meanwhile, Mom’s emotions went from tears to anger. She wants to move back into her house.

No amount of logic could do anything to change her mind. When we returned to the apartment, I offered to hang up some of the paintings that had been taken from the house. Hubby said he had left a small hammer and picture hooks in a drawer in the apartment. Mom claimed one of the staff had stolen the hammer and hooks.

Hubby and I searched the apartment. I found the hammer and hooks in a cardboard box in the closet.

Mom exploded. She did not want the pictures hung on the walls. She was not staying in the apartment. She was moving back home!

Hubby and I left the apartment. We went to a Mexican restaurant and had very large Margaritas. 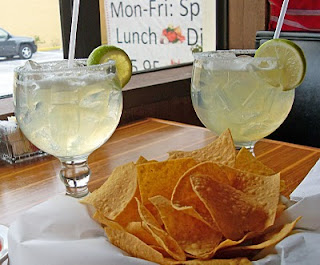 We decided not to take Mom to the house again. We stopped at Home Depot and bought the toilet valve replacement. Hubby put it in while I cleaned up some disgusting moldy gunk on the floor in the old family room. Yuck.

The next day, we ate in the dining room with Mom and Dad. I tried to suggest that Mom should go on some of the excursions offered by the facility. She said she won’t because then the staff will find out how bad Dad is and they’ll put it in his report and soon he’ll be locked away in Memory Lane and she’ll never see him again.

Again, logic did not help the matter. She only got more worked up.

We decided to take Mom and Dad on an excursion to the beach. That turned out to be a good idea. For a few hours, all was calm, but when we said we were taking them back to the apartment, Mom got angry again. She wanted us to spend every minute of the day with her.

The next day, we took them to another beach. Again, all was pleasant for a while. Dad and Mom sang songs together and I captured those precious moments with my camera.

Then we took them back to the apartment in time for their dinner. Again, Mom was angry, but we promised to be back immediately after dinner.

Hubby had retrieved his old accordion from the house. He brought music along and so as everyone in the dining hall was finishing their supper, we provided an impromptu concert.

The residents loved it. I sang, hubby played. We kept it up for over and hour. Mom was all smiles as all the residents learned that the musician was her son.

The concert ended. We went upstairs to Mom and Dad’s apartment. We thought we could leave the accordion there so that it would be available for the next time we visit.

Mom complained. “What am I going to do with it when I move back to the house?”

Again, hubby reiterated that it would be nice so that the next time he visits he could play for everyone.

“Do you think we’ll be here next time you visit?” Mom asked.

Hubby picked up the accordion. We gave Mom and Dad a hug, said goodbye and left quickly.

It was difficult to endure Mom’s anger directly solely at us.

Otherwise, from all we could see, she is very sweet to the staff and to the other residents. In fact, the women that sit at the table in the dining room with Mom and Dad for every meal told me how much they enjoy all the stories Mom tells.

And Mom does go on at least one excursion on a regular basis. Every two weeks, the facility provides a bus trip to the library less than half a block from Mom’s old home. She hops on the bus and visits her house every two weeks.

For years, we’ve asked Mom and Dad to move near us. They’ve always refused.

I don’t expect the gloom and doom phone calls to change, but we do know Mom and Dad are in good hands.

Hubby plans to fly down for Mom and Dad’s 70th Wedding Anniversary. They are so fortunate.

I Bought a Nook

Most people know I'm a bookaholic--so this year I amassed $85 in Barnes and Nobles giftcards, which is really amazing and I thank all those who were so generous to me. The problem is I already have a zillion books in my To-Be-Read pile. I try to stay away from bookstores. However, the temptation is often too strong. Last week, the local AAUW had its yearly book sale when all the books were priced at $5 a bag. I filled the bag--to the brim--and felt guilty for adding more books to my collection.

Then the price of the Nook came down to $149. I already have an eBookwise reader, which I love. I love the backlight that allows me to read in the dark. I can read while hubby is driving, while hubby is sleeping, and while hubby is listening to jazz music in the park. (Hint: I am not a fan of jazz.)

But the Nook has Wi-Fi, I can check my email, my Facebook, and my Twitter--and download books from the air--or best of all--upload my current manuscript into the Nook as a PDF and then edit it. The font selection goes from very small to very big. :^) The display uses e-ink which is easy on the eyes. With $85 in giftcards, I only needed $64 of my own cash to complete the transaction.

So I bought the Nook. But then I needed a cover to protect it and Barnes and Noble had a neo-hippie purple and pink cover with an orange heart on one side and a peace symbol on the other for $29.95. How could I resist?

So for the past few days, I've been playing with my new Nook. I downloaded a free copy of Jane Eyre into it, but it came loaded with some all time hits like Pride and Prejudice and Dracula as well as some interesting samples.

Then I downloaded The Jesuit Guide to (Almost) Everything, a book I've been wanting to get. It took moments for it to load into my Nook. This could be a very dangerous toy for a bookaholic.

Surfing the web isn't all that easy. The touch screen is small, but very sensitive. It is not as fast as a computer. Still, after a bit of practice, I can manage it. I think having small fingers helps.

The Nook came with two games, chess and Sudoku. I don't play games, except for Scrabble--and that I like to do with real, live people.

The Nook can also hold music files. I moved some of my classical Chopin files into the Nook. Now I can read AND listen to Chopin. No matter where I go, I can feel like I'm inside Barnes and Noble's store.

I'm happy with my Nook. I am so delighted that ebooks have finally been recognized as being as good as paper books. It took so much longer than I anticipated when I first became an e-published author, but to see the general public embracing the new technology is wonderful. I see people reading on their ebook devices in doctor's waiting rooms and on the subway.