2008 had some highs and lows--the usual roller coaster of life. Still, with my mother spending a total of two months either in the hospital or in rehab--we had some really low days. Nevertheless, while my mother is still very frail, my father is able to take care of her most of the time. My sisters and their families, despite living so far from us, have pitched in whenever they can to help out, which has made a big difference.

Daughter #3 got a new job this year and loves it. She also presented a program at a FEMA conference. The high point of her year!

Daughter #1 had a terrific time on a surf clam research cruise. She and her labmates traveled on a very large ship, 168 feet long. It had two dredges mounted on the stern. She loved being at sea. In June, she took a course on protein purification and had a blast! Her protein was the best. :^) But recently she has been suffering with an inflamed gallbladder. Oy.

Daughter #2 finally got her very own apartment this year and some recognition for her musical talent. (See The Missed Connections: 'Some Girl, Some Bar, Some Other Time'.) Then she lost the hearing in her left ear quite suddenly the weekend before Christmas. She’s currently on steroids and we’re hoping her hearing will return, but there’s no guarantee on that. (See Sudden Deafness.)

On a positive note, I am faithfully working out at Curves three times a week and hubby started a weight-lifting routine back in May and has stuck with it. Hopefully, the workouts will keep us in good shape.

Professionally, it was a great year. The Keeper’s Promise was released in March and is now an EPPIE finalist. Though the contracts for three of my books ran out at New Concepts Publishing, Crescent Moon Press gave me contracts for two of those books and they will be reissued in 2009.

In addition, The Beast of Blackbirch Manor will be released by New Concepts Publishing in print in April and will be available in Borders bookstores.

On the down side, I did not finish writing my current work-in-progress--so my New Year’s resolution is to finish that book--and then another one I had to set aside. Afterwards I want to complete a third manuscript that I barely started but found I had so much enthusiasm for it.

The Craziest Time of the Year 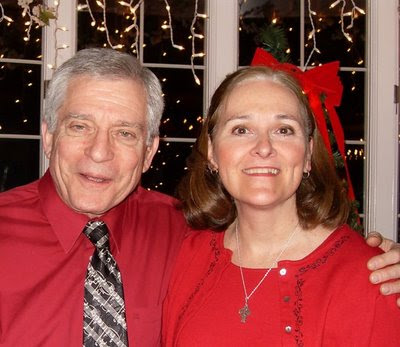 Here's a photo of hubby and I at a party. The red bow is not in my hair. It is on the top of a Christmas tree behind me. But yes, it makes me look silly. :^)

This is the craziest season. I know there are those who agree with me. There is simply too much to do: attend numerous parties, decide what gifts to purchase, buy those gifts, wrap them, put up the Christmas tree, put ornaments on the tree, put gifts under the tree, string lights outside, send out Christmas cards, clean the house, bake calorie-laden treats, and feed visiting relatives.

In our case, there’s also several extra entertainment gigs. Everyone wants Christmas music this time of the year and hubby is thrilled to provide it. Very often, I’m leading everyone in song with those fa la la la la’s.

So far this season, I haven’t lost my voice.

However, writing time has been nearly impossible to find though I still need to squeeze it in. Crescent Moon Press is going to reissue The Company You Keep, which means I have to fill out the cover art questionnaire. It includes a blurb and a short summary of the book.

Naturally, I don’t want the same blurb previously used. So I agonized for days over a new blurb and finally got it down--well aware that the editor may change it.

I am currently working on the short summary, which reminds me of all the book reports I had to do when I was young. I’ve always loved reading books and I love writing books, but books reports are not fun for me--even if it’s my own book--maybe particularly because it is my own book. I know I have to leave out a lot and just hit the high points. Sigh.

Labels: Christmas, The Company You Keep

The Keeper's Promise is an EPPIE finalist in the inspirational category. To see the complete listing with all the categories go to EPPIE Finalists.
Posted by Penelope Marzec at 12/06/2008 03:30:00 PM 1 comment: