Yesterday, the Andromeda bushes in our yard looked lovely with a coating of ice--and so did all the trees. But the limbs were too heavy and many soon came crashing down--pulling down power lines. We had no power for 27 hours. We used up almost all of the firewood we had trying to keep warm. We did not get much sleep. Hubby kept an eye on the fire for the first half of the night, and I took the second shift. 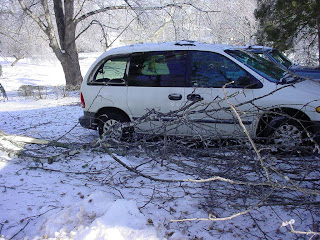 It was dangerous to be outside. The tulip tree seed pods were the size of golf balls and every time the wind blew, the ice encrusted seed pods came crashing down. One large limb broke a window on our trusty minivan--but we're thankful that is all that was broken. We were so happy to see the power company trucks arrive to fix the power lines. This was certainly a memorable Valentine's Day!
Posted by Penelope Marzec at 2/15/2007 08:07:00 PM 2 comments: 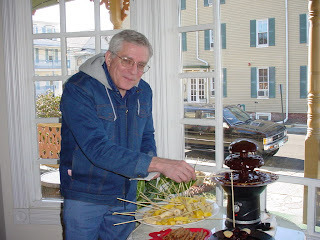 Yesterday we went to Ocean Grove for their annual Chocolate Lover's Weekend. Hubby thinks of it as trick or treat for grownups. There is lots of free food. We went to the Manchester Inn first because they have the biggest selection. We both had some soup, but while we were sipping our soup a waiter came around several times with chocolate covered delicacies for us to try. We sampled chocolate covered potato chips, chocolate covered bananas, and white chocolate covered popcorn.

From there, we went to the Ocean View Inn and the Ocean Plaza where I took the photo of hubby and the chocolate fountain. The Carriage House had chocolate cheesecakes, and the Henry Richard Inn had tortellini soup--which I heard was wonderful but by that time I had sampled so much that I did not have any room left in my tummy. 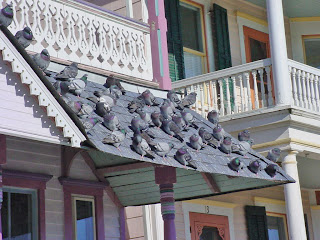 It was chilly in Ocean Grove, but the sky was blue and the weather was considerably warmer than it had been most of the week. I love the beach in the winter when the tourists are gone. It is so much more peaceful. Even the pigeons were unperturbed as we walked by. They continued to huddle together on one sunny rooftop atop a gingerbread covered cottage. There are some new houses being built in Ocean Grove, but the new ones are not as fancy as the older homes. Obviously, the pigeons like the older homes, too.
Posted by Penelope Marzec at 2/11/2007 04:54:00 PM 3 comments:

Saturday, hubby and I attended a Fortieth Anniversary celebration for our friends A & C at our church. We've known A & C since we moved to this town. They had six boys and then adopted a girl. They were always active in the church and handed us the job of running the Pre-Cana program--which we did for many years.

After the ceremony where A & C renewed their vows, everyone went downstairs to the cafeteria where there was plenty of food. A & C could have fed an army! Hubby and I ate way too much.

In these times when so many young people simply live together, and so many young couples who do get married get divorced, it was wonderful to celebrate a successful marriage. A & C have had some very hard times, but they weathered the storms.
Posted by Penelope Marzec at 2/05/2007 04:07:00 PM 1 comment: