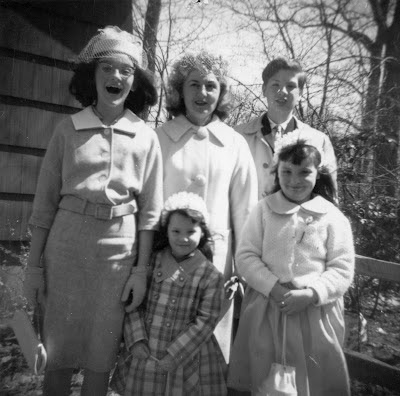 Forty-nine years ago, this was Easter. There's me with my mouth open and those crazy eyeglasses, which were very stylish at the time. Notice the gloves on my hands and the pillbox hat, also the very height of fashion. Mom is next to me, my brother is on the right (with a very skinny tie). My little sisters have bonnets and handbags. I know they must be wearing shiny patent leather shoes. Dad must have taken the snapshot, but I am sure he wore a suit.

Every Easter, we always wore new, special clothes. Our Easter outfits were a very important part of the celebration. We went to Mass every Sunday. However, on Easter we went in high style. But what was chic in 1963 is not chic anymore. I am especially glad I don't have to wear eyeglasses like that anymore!
Posted by Penelope Marzec at 3/30/2012 09:24:00 AM 2 comments:

A Fresh Coat of Ideas

Last weekend, I pitched The Pirate's Wraith to four different editors at the Liberty States Fiction Writers conference. Each of them asked for either a partial or the full manuscript. By Monday, one of the editors sent a rejection. However, it didn't sting too much for two reasons. First of all, she warned me that she did not know if there was a place for a time travel in her company. Secondly, we were going to have the living room and dining room painted.

Distraction is a great way to deal with rejection.

Monday was a busy day at our house. We had to eliminate all the clutter in the two rooms that were going to be painted. We have a surprising amount of clutter after living in this house for 33 years.

The painter arrived on Tuesday. He worked non-stop and finished the job. The rooms look so much better. I love my clean walls. However, I could not bear to put all the clutter back.

Wednesday, we brought a whole bunch of clutter to Goodwill. I tossed out the old curtains in the dining room. I simply could not hang them up again. Daughter #1 went online and ordered a new pair.

Thursday, hubby and I took a break and went to the Columbus Flea Market. The weather was glorious. We drove along Route 537, past farms with green grass and flowering trees. Hubby found another musical instrument at the flea market that he could not pass up. (More clutter--I can't win.) I got dried pineapple slices and sesame sticks.

Once we were home, I decided to start another book. There's no point in waiting for an editor to make a decision on my manuscript. I'm still waiting for a decision on Daddy Wanted, which I handed in last year to an editor. So I pulled out my idea file. 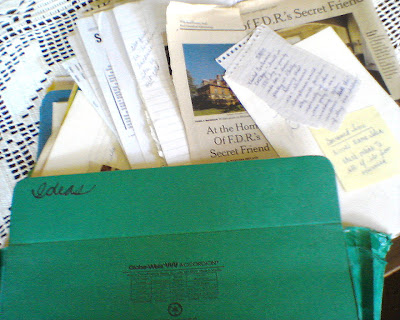 My idea file is messy. There are sticky notes, little scraps of memo paper, and newspaper articles. Some of the ideas are no more than a title. Some are character sketches. Some are whole outlines. It's wonderful.

Before attempting to write a book about a pirate in 1711, I immersed myself in books about pirates and sailing ships. While most of the books were non-fiction, I read some fiction as well, such as James Fenimore Cooper's, The Red Rover and The Pilot. I read Jack London's The Sea Wolf. My favorite was Rafael Sabatini's Captain Blood, but I also read his Sea-Hawk. (Hint: Most of these books are FREE or close to it.) I learned about buggery from a rather gritty book, The Eye of the Fleet.

Then I read a bunch of non-fiction books: The Complete Idiot's Guide to Pirates, Pirates and Privateers, The Pirate Prince, The Mammoth Book of Pirates, and Two Years Before the Mast. I cannot say I became an expert, but I do feel I gained a better understanding of the era and I am very glad that I live in modern times. :^)

I did not use everything I read in my own pirate story. In fact, I used only touches here and there. After all, my pirate story is mainly a romance--it is concerned with a relationship. Yes, there is quite an adventure, but the focus is on the couple.

I love delving into history. All the little details are what make it interesting. Unfortunately, most of those details are not in standard history books, which usually offer a brief overview and dates.

Am I Famous Yet?

Prince of the Mist is a hit this week. I hope all the readers who downloaded it for FREE enjoyed it and will give it a favorable online review. I also hope this sample of my writing will convince readers to try some of my other books. Some writers have used this marketing strategy and it has worked. Some claim it did not make a difference. Some refuse to try it.

I have downloaded free books. Since I have a Nook, I always check the Free Friday offering. I love to read classics and since the copyrights expired a long time ago, those are free. I buy plenty of used books, too. I have discovered many terrific authors this way and I have subsequently purchased their other books.

It took time for me to write the book and it would be nice to be compensated for that time, but I do have other books. I finished Daddy Wanted last year and I'm still trying to find a publisher for it. The Pirate's Wraith is completed and now I have to shop it around and find someone willing to take a chance on it. In a few weeks, I intend to start another book.

A writer must keep writing AND finishing books. Of course, it isn't hard if you have a lot of stories to tell. And I do. Please visit my Facebook fan page (http://www.facebook.com/penelopemarzecbooks) and like it just in case I become uber famous someday.:^)
Posted by Penelope Marzec at 3/08/2012 10:07:00 PM 2 comments:

FREE for One Week Only 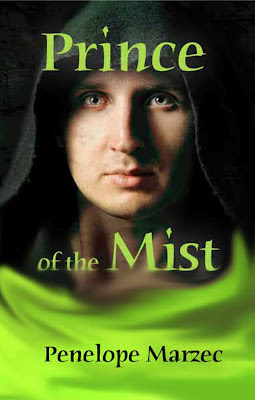 For one week only, you can download Prince of the Mist for FREE! (Just in time for St. Patrick's Day!) You must download the book from Smashwords and use the coupon code. You can find the book here. Smashwords offers books in all sorts of formats--so there's one for your ebook reader.

Smashwords is offering all sorts of books at discounted prices because it is officially Read an EBook week. Now is the time to load up your ebook reader. Don't miss out!
Posted by Penelope Marzec at 3/03/2012 07:39:00 PM 3 comments: 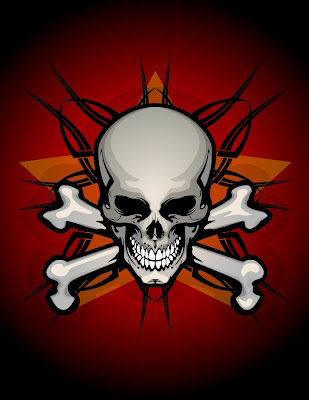 I finished The Pirate's Wraith, my time travel/pirate romance! This week I've been tightening, editing, and checking for continuity. I love the book. :^) Whether or not an editor will enjoy it is debatable. It all depends on the editor.

Writing is a really crazy occupation. I've spent a great deal of time on this book and finding the time has not always been easy. Writing a book is a gamble, but I do it because I have fun with it.

If the book were ever made into a movie, Josh Holloway should play the part of my pirate captain and Marie Avgeropoulos should play the heroine. At least, in my opinion. :^)

Of course, since the book is a romance it will probably never be made into a movie--though you never know. This one does have quite a bit of action.

At any rate, wish me luck. I'm going to the Liberty States Fiction Writers Conference and I have an appointment with an editor. So if my nerves don't get the best of me and I am able to put together a few coherent sentences in explaining the plot, maybe I'll get a contract.
Posted by Penelope Marzec at 3/02/2012 09:50:00 AM No comments: