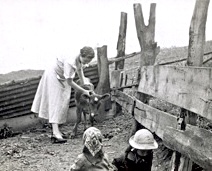 The hero in ANGEL OF THE L TRAIN grew up on a farm. I did not but my mother did. Every summer, we went out to stay on the farm for a few weeks with my grandparents. So, my experience with farm life comes from those visits. The photo on the left is an old one. My brother and I are in the foreground, while my mom is holding onto a calf.
My grandfather didn’t have a herd of cows. He usually had one or two, as far as I can remember. He tried to teach me how to milk the cow, but I didn’t get the hang of it. He taught me to use a scythe. I did well enough with that on the grass. I never tried it on wheat.
My grandmother had a garden and did a lot of canning. When we arrived during black raspberry season, we would pick raspberries. Then my mom would make jam and pies. To get to the woods up on the hill where the black raspberries grew, we had to duck under the electric cow fencing. Once, I was coming down the hill with a coffee can of berries and before I ducked under the electric fence, the can touched the wire. The shock vibrated through my body and fortunately the can fell out of my hands.
I was upset but physically fine and hurried back to the house for a hug—without my berries. Afterwards, I made sure to give the electric fence a wide berth.
We went to a farm auction and my grandfather told my mother to bid on a huge batch of eggs. She was the highest bidder and we came home with dozens of eggs. We ate eggs and everything else that could be made from eggs for quite a while.
My brother and I had fun with our cousins by jumping into the hay in the barn from the rafters. We visited all the aunts and uncles. Ducks nibbled at our hair. We watched heat lightning in the evening for our entertainment as the adults chatted. We listened to Grandma tell us stories.
My grandfather never had a car, but he used his tractor to go into town. That’s my dad, my sisters, my brother, and me posing with the tractor. As children, we didn’t have the responsibilities of farm chores—except for picking berries, hanging clothes on the line, setting the table, and doing the dishes. But it still seemed like a slower pace than we were used to when we were home.
My grandmother cooked up enormous amounts of food and there were always guests at the table.
I have many fond memories of those summers on the farm. My hero in ANGEL OF THE L TRAIN often thinks about his family back home on the farm. But he’s living in New York City and tries to convince himself how much better it is.
Pre-order a copy of the book now at https://www.amazon.com/Angel-L-Train-Penelope-Marzec-ebook/dp/B09VRRGSTR/
Posted by Penelope Marzec at 7/27/2022 05:18:00 PM No comments:

Last week I wrote about my experiences with the NYC subway system since one of the main settings for Angel of the L Train is New York City. However, the heroine of my book grew up in the Pine Barrens and returns there when her situation in New York gets out of hand.
I haven't lived in the Pine Barrens--so I can't call myself a Piney. But I live in New Jersey and find the Pine Barrens a unique part of the state which is very intriguing. It's also known as the Pinelands of New Jersey. The Pineland National Reserve encompasses 1.1 million acres of the southern portion of the state and is about 22% of New Jersey's land area. It’s bigger than Yosemite or Grand Canyon National Park. The sandy, arid soil is not good for standard crops but it is good for cranberries and blueberries. It is also home to a wide variety of animals. The ecosystem even includes some carnivorous plants. 😮

I've enjoyed some good times in the Pine Barrens. The Cranberry Festival in Chatsworth is fun. I've camped in the Pine Barrens and gone swimming in a cedar bog. I came out dripping red water, which was a bit disconcerting. Officially, it’s called “tea colored” water, but it sure looked red to me.
I've visited Double Trouble State Park  and Batsto Village. Two of my daughters went to college at a campus located within the Pine Barrens. I've also been to Albert Music Hall many times to hear live country, bluegrass, and Pinelands music.
Then there was the night I heard the Jersey Devil. What an eerie experience! My daughters were asleep, tucked into their sleeping bags inside the tent while I sat at the picnic table with our Coleman lantern, reading a book. Hubby had gone to take a shower. Suddenly, there was a horrible screech. The lantern went out and everything went quiet--even the crickets were silent. I was petrified and fumbled around attempting to find a flashlight. Fortunately, after a few minutes, hubby came strolling back and wondered why the lantern had gone dark and then he fixed it. It’s true I didn’t see anything, but I think that's just as well. I was already scared.
One of the strangest sights in the Pine Barrens is the pygmy pine forest--one of the only such forests in North America. The trees are very short. (You can read abut them here: https://www.onlyinyourstate.com/new-jersey/bet-you-didnt-know-quirky-find-nj/)
If you haven't been to the Pine Barrens, I reccommend taking some time to check it out. Then you'll understand why my heroine feels it's a great place to escape from her troubles in the big city.
💗💗💗
Posted by Penelope Marzec at 7/20/2022 05:00:00 PM No comments:

The Ideas That Sparked ANGEL OF THE L TRAIN. 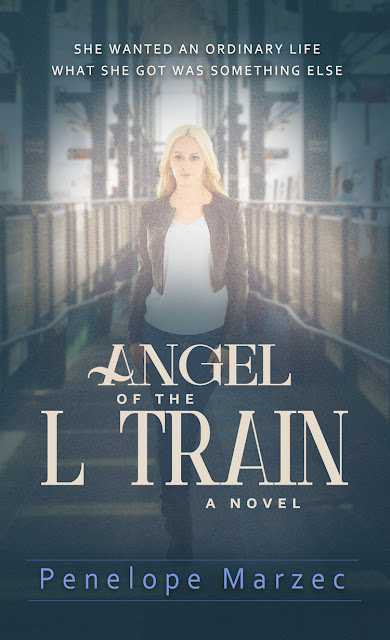 People often ask where the ideas for my books originated. In my case, there's usually more than one spark that leads to a novel. A variety of circumstances, settings, and events usually coalesce at some point and I start writing.
For Angel of the L Train several experiences factored into the story. For today’s post, I'll reveal something about one of major settings in Angel of the L Train. Settings are essential for me. I visualize the places where all the events in a story occur. That way I can convey the important details to the readers.
New York City is featured in this book. I am not an expert when it comes to New York. However, I don't live far away from it, and I have spent time there. In my younger years, I went there on class trips or with my parents. During my college years, I visited the art museums. Later, I met my husband and learned he grew up in Brooklyn. His parents continued to live there until they retired to Florida. One of our daughters lives there now.
Many years ago, our Brooklyn daughter required two serious surgeries. Hubby and I stayed at her apartment and visited her at the hospital every day. That's when I learned all about alternate side of the street parking and the subway.
Alternate side of the street parking is very annoying and a good reason not to have a car in the city. But the city needs to keep the streets clean. So, people with cars have to move them in order for the street sweeper to clean the street. But, with parking spaces at a premium, as soon as the street sweeper goes by, people rush to park their cars on the clean street before someone else comes along and takes their space.
The New York City subway is endlessly fascinating to me. There's always entertainment of some sort, which ranges from classically trained musicians to the bucket banging maniac in the tunnel or the poet who will compose a poem on the spot just for you. There are also renegade entertainers who do not apply for a permit but entertain anyway. Performers actually don’t need a permit but they must adhere to a long list of the transit authority’s strict rules. These include no amplification and not impeding passenger movement. Most importantly, musicians are not allowed to perform inside a subway car. Some do it anyway. Once, hubby and I were on the subway and a gang of musicians with congo drums invaded the car. They pounded those drums with all their might, passed around a hat for money, and exited the car at the next stop. They didn't get caught.
Of course, there are rats in the subway. Those furry underground denizens appear to be perfectly adapted to the environment and they are not afraid of people.
For more about the subway read this: https://www.thrillist.com/travel/new-york/nyc-subway-best-way-to-see-new-york
Next week, I'll tell you about the other setting I used in Angel of the L Train. Watch for it!
Posted by Penelope Marzec at 7/14/2022 11:16:00 AM No comments: