New Book Video for The Beast of Blackbirch Manor

The Beast of Blackbirch Manor will be released in a print edition in April. (Very soon!) It will be available at New Concepts Publishing. It has been my best selling book so far!
Posted by Penelope Marzec at 3/30/2009 09:51:00 AM No comments: 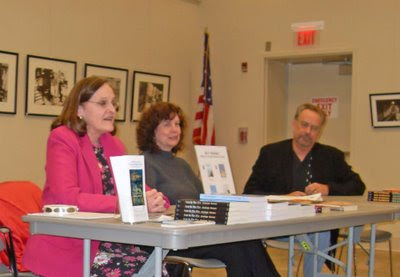 Last night at the Middletown Township Public Library, I joined a panel with two other authors, Amanda Matetsky and Jack Getze. Each of us spoke about our personal path to publishing our books.

Those in the audience were very interested in publishing and asked plenty of good questions. It was an great evening. I always love to talk about writing. :^)
Posted by Penelope Marzec at 3/17/2009 05:39:00 PM 2 comments:

An Adventure in Greenpoint

We visited Daughter #2 in Brooklyn again, but due to the anticipated snowfall on Sunday, we took the train. Daughter #2 met us in Penn Station because we were confused about the subways. Riding the subway is an adventure. Lots of people read books on the subway--or while waiting for the train. It is encouraging to see so many people reading. However, there seem to be an equal number of people listening to their iPods. Those people are in their own world. Some sing along to their chosen tunes. Some groove to the music. One young woman put on quite a dance show on the platform.

A trio of drummers hopped on the subway car at one stop. They brought along small portable stools and sat in the middle of one subway car with their large drums. I enjoyed the music. 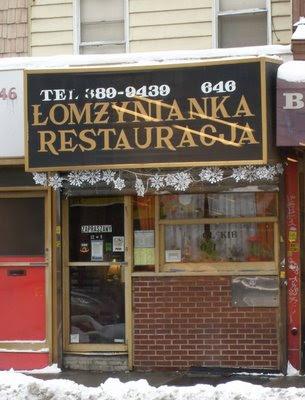 We arrived in Greenpoint just in time for dinner. We ate at the small Polish restaurant we had enjoyed so much on our last visit. The food is inexpensive but good. However, I cannot pronounce the name of the place. It doesn't look like much, but it is a popular. I highly recommend it. Last time I had the breaded veal, this time I had veal meatballs with dill sauce. Hubby had Bigos--the traditional Polish hunter's stew. Daughter #2 had stuffed cabbage.
Posted by Penelope Marzec at 3/04/2009 06:39:00 PM 1 comment: