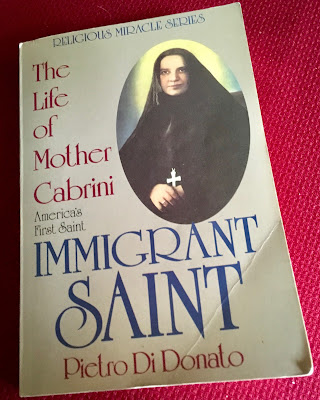 Many years ago, Daughter #1 chose Frances as her confirmation name--after Francesca Xavier Cabrini. She wrote a brief biography of the saint, as all confirmation candidates must do for the saint whose name they have decided upon. But it was a short biography with little more than the facts.

Recently, my daughter decided to delve deeper into the history of her chosen saint. She found the book pictured here on Amazon and purchased it. She was delighted with the book and loaned it to me.

The book is well-written and engaging. It is not a dull tome about Mother Cabrini. The book details the saint’s fortitude and belief in her mission. At a young age, she fell in love with Christ and longed to be a missionary sister. However, due to her ill health, she was not accepted into any religious communities.

Eventually, after toiling in an orphanage, she was allowed to set up her own community, the Missionary Sisters of the Sacred Heart. She had always longed to go to China as a missionary, but Pope Leo XIII sent her to America. She worked with indefatigable zeal to set up orphanages, schools, and hospitals in New York, Chicago, Denver, Seattle, Los Angeles, and in South America as well.

She and her Daughers went down into the mines in Colorado to bring hope to the immigrants who had not seen the inside of a church since they left Italy. They nursed people through outbreaks of yellow fever and smallpox. They begged for money to set up more hospitals, schools, and orphanages.

In her sixty-seven years, Mother Cabrini accomplished more than many successful business men.

Whether you are a Catholic or not, I highly recommend this biography of a truly remarkable woman who did all she could with love to guide her.
Posted by Penelope Marzec at 1/30/2018 10:55:00 AM No comments: 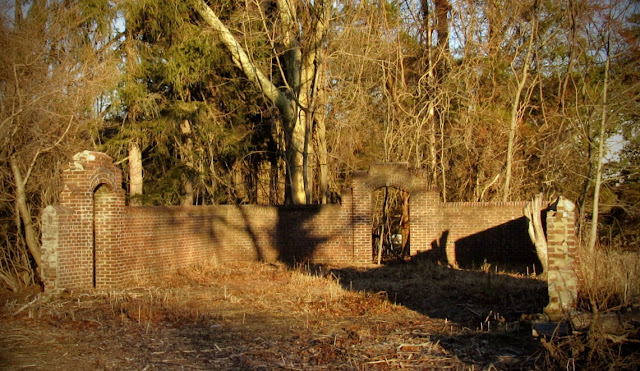 Last weekend as the shadows lengthened in the late afternoon, I saw the remains of this brick walled garden on the grounds of the Township of Ocean's Historical Museum. It was off to the side of the more famous, ornate water tower at that site. The garden must have been magnificent at one time, full of fragrant, rare blossoms. Now it is only a sad ruin. I'm sure if I return in the summertime, I would find a profusion of weeds, but no roses--or any other delicate prized blooms. Unless someone takes a fancy to the garden, it will never be returned to its former glory for it would cost far too much.

And yet, it’s delightful to imagine sitting on a bench inside the sturdy wall surrounded by the scent of sweet flowers and the steady hum of bees busy at their tasks. I believe this is why I enjoy historical romances so much. It’s delightful to go back in time and see things in their former glory. I cannot fix the garden, but I can envision it as it was in my mind.

Close your eyes and picture it with me. Perhaps we’ll have some tea in fine china cups and a few scones, too. Imagination is wonderful.

Hibernating With A Book 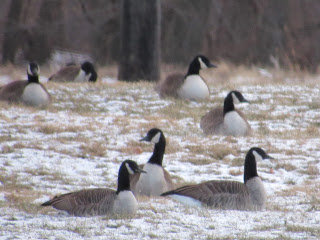 It's cold outside. It's been well below freezing for over a week. I feel like hibernating, which for me usually involves reading a book for hours on end and forgetting about all the other chores I should be doing.

The temperature does not seem to bother the Canadian geese in the park. They don't even huddle together as they sit serenely on the snow. I took this photo from the window of the car. I didn't want to get out of the car.

Today it is supposed to warm up a bit--reaching nearly thirty degrees. Hubby and I plan to remove the Christmas lights which we draped on the bushes before the holiday. Tomorrow we're supposed to have a huge storm and then it will continue to be bitterly cold for a while longer, which is fine with me. I'll huddle under my afghan and make a dent in my To-Be-Read pile of books.