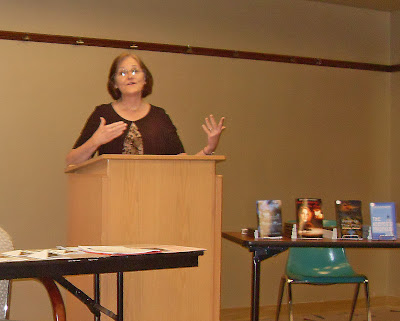 I love to talk about books! I had a wonderful, attentive audience today at the Monmouth County Eastern Branch Library. They asked some great questions.

Rolling With the Punches


Please see the follow-up for this post at: http://www.ameliamarzec.com/rewired/
It’s been a tough year for the Marzecs with too many hospitalizations of family members.

I’ve never watched television soap operas and for the most part, I’ve seldom been intrigued by any television series because I’ve got plenty of drama all around me.

Unfortunately, it’s not simply drama in the theatrical sense, it’s real—it’s painful—it doesn’t go away—and there isn’t always a happy ending. (Which is why I’m hooked on romances—I always get a happy ending no matter how bad things look in the beginning.)

Of all the difficult circumstances this year, the hardest one to take was discovering the tumor in Daughter #2’s head grew back after last year’s surgery to remove it. (You can read about that operation HERE.)

As soon as she found out the tumor had returned, she eliminated anything artificial from her diet and began to eat everything thought to reduce tumors. Yes, the tumor is technically benign, but it’s in a bad place. It presses on the facial nerve, the brain, and has been the cause of the loss of her hearing in her left ear.

This past week, Daughter #2 had her second surgery for the acoustic neuroma. 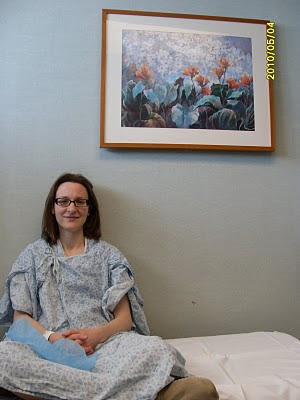 (Above: Waiting for surgery to begin.) 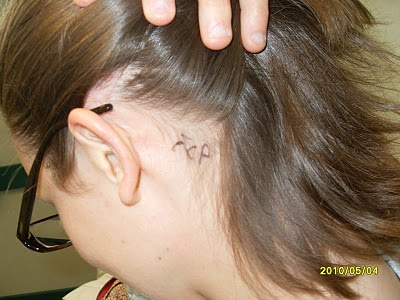 (Above: The surgeon's mark)

As we did last year, hubby and I stayed at Daughter #2’s Brooklyn apartment and took the subways to NYU Medical Center where the surgery was done. It was a long, delicate procedure and we did not see Daughter #2 in the recovery room until around 8:30 p.m.

Though she was groggy, she was able to speak to us. She was very concerned as to whether her facial muscles worked. The ones on her left side are weak, but minimally—so she may regain her wide smile. She told us to take out the garbage and to tell her landlord she was okay.

Exhausted, we headed back to Brooklyn late that night. However, we stopped to listen to an accordion player at the 14th Street station. Music is magical, no matter what else is going on—music touches the soul in a special way. The elderly accordionist played old folk tunes on his very ancient instrument. It was nice to take a break in all the hectic craziness of the 14th Street station. 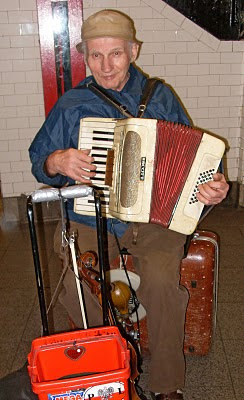 By the next morning, Daughter #2 was doing very well. She was eating. Last year, for the first few days after surgery, she spent a lot of time being nauseous. The doctors claim to have removed 95% of the tumor. They could not get it all because the facial nerve rested on it. So if the tumor grows—as it did last time, the next step is the gamma knife. Daughter #2 had an MRI on the third day, the results of that will give the doctors a baseline to assess any tumor growth. 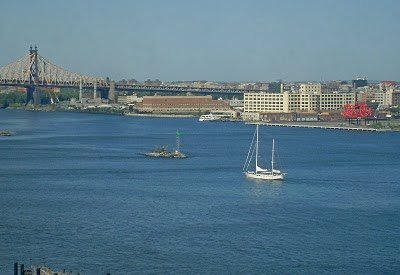 (Above: The view from Daughter #2's room in intensive care.

Also on the third day, Daughter #2 had all the wires and tubes removed. Though she was still in ICU, her coworkers came to visit, which cheered her immensely. 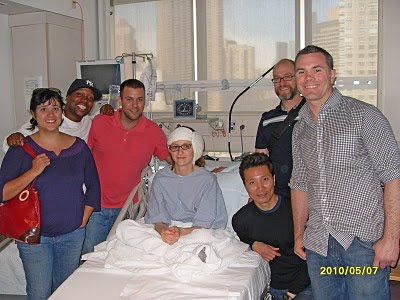 (Above: Daughter #2 and some of her co-workers.) 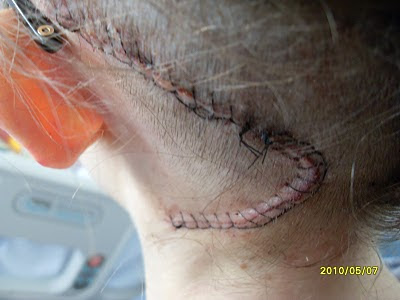 (Above: The Impressive Scar)

The next day, the doctors took the bandage off. She has an impressive scar. Discharged from the hospital, she will now recuperate at home.