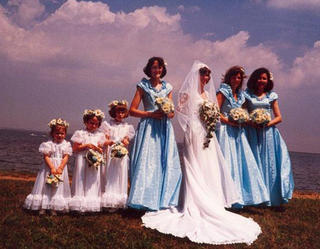 Daughter #1 had a week off from work so she joined hubby and I for a visit to younger sister #1 and her gang who live near Hartford, Connecticut. The day we arrived happened to be the twentieth wedding anniversary of my sister and her husband. After a supper of pizza, my hubby suggested watching their wedding video.

Everyone was so much younger! My daughters made up the little herd of flowergirls--and now my daughters are all grown up. Despite having given birth to the three of them, I looked terrific. I led the singing at the wedding and hubby played the organ. Quite a few of our friends and family have passed away since that wedding, but it was nice to see them again on the screen.

Hubby and I were married before wedding videos were invented. We have still photos of our wedding, but that is not as nice as seeing everyone in action.

Last night, hubby and I drove to Ocean Grove to listen to an organ concert in the Great Auditorium. Gordon Turk was performing on the amazing Hope-Jones pipe organ. Hubby used to play the organ at church for quite a few years until he joined the Happy Days String Band, so he has an appreciation for the complexities of playing the instrument.

When our daughters were young, we would take them to the organ concerts, too. Evidently, they now claim that was the worst thing we ever did to them. :^) We knew they hated going, so we would bribe them and offer them an ice cream cone at Day's afterwards.

However, last night, it was Christmas in July at Ocean Grove. Many of the little tent houses were strung with Christmas lights and decorated with red ribbons, Christmas trees, and wreaths. After the organ concert, we strolled down to the Pavilion on the boardwalk where the band was playing Christmas carols. While we were there, Santa arrived on a firetruck. Santa had on his red hat and beard, but he also wore shorts, a Hawaiian shirt, and sandals. It was a funny sight and brought smiles to everyone's face.

Santa handed out lollipops and warned everyone to be good before he exited via the firetruck again.

We walked on the boardwalk after that. There was a beautiful, huge moon in the sky last night, too. It looked lovely over the water.
Posted by Penelope Marzec at 7/21/2005 09:50:00 AM 5 comments:

I just received the stamp of approval from my editor for the cover of A RUSH OF LIGHT!

I love it because it is exactly what I want. Daughter #2 put it together for me. It's nice to have talent in the family. :^) The book will be released by Awe-Struck E-Books in January 2006. It will be my third inspirational romance from Awe-Struck. I can hardly wait!
Posted by Penelope Marzec at 7/18/2005 11:46:00 AM 7 comments:

Yesterday, hubby and I loaded up the minivan with a dresser, a desk, a chair, a set of dishes (purchased by me over a period of months at the supermarket), a set of utensils (hubby's original bachelor set), and the cooler which was filled with a batch of my own enchiladas. Daugher #1--our marine scientist--has moved into an apartment, but after years of living in dorms she did not own any furniture. She did have a small television, her computer, and her piano keyboard, but that was it.

Grandma gave her lamps, a table and some mismatched chairs. She bought a bed, a microwave, and a coffee table from one of her coworkers who was leaving to have a baby. Her godmother gave her the dresser, desk, and chair, but hubby and I had to transport the stuff. The apartment is one hundred miles from our home--so it's not around the corner, but we had a pleasant drive yesterday.

After we unloaded all the stuff, the apartment looked a bit more as if someone lives there. I heated up the enchiladas in the microwave and we ate supper. Then hubby and I hit the road for the return trip home. We didn't get back too late, but I was still too tired to do any writing. So I read someone else's book.

Daughter #1 is reading Wuthering Heights. She tells me she is enjoying it. :^) But she wonders why the Bronte sisters liked the tall, dark, and ugly types.

Here's a photo of us standing on the apartment's front porch. I'll have to look around for some porch furntiture next.

In The Good Old Summertime

My hubby belongs to the Happy Days String Band. The band plays cheerful music and they have a bunch of strutters who dance around in outlandish costumes covered in sequins and feathers. In the summertime, the band plays regularly for the public in gazebos up and down the Jersey shore.

I attended the performance last night.

My hubby is the band member with the red accordion. (Hard to miss.) He loves playing with the band. He says it's almost like running away and joining the circus. Sometimes, the members of the band put on the feathers and sequins, too.

Today's Asbury Park Press has my hurricane story in it. Lake's treasure gone foreveris part of a series. I was ten years old when Hurricane Donna brushed the New Jersey coast and it was rather scary!

There are other stories from people who witnessed the 1944 hurricane in New Jersey which had no name.

Nature's fury can be devastating. I hope NJ never receives a direct hit from one of those storms especially since, in the past few decades, so many people have built their homes right up on the dunes in places like Long Beach Island.
Posted by Penelope Marzec at 7/03/2005 08:21:00 AM 4 comments: