Mom and the Peonies 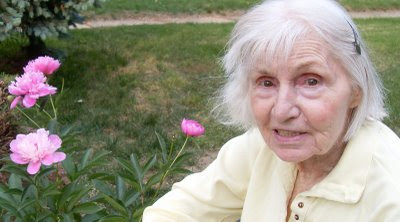 Years ago, my mother gave me a clump of the peonies from her mother's property. I don't have much of a green thumb and hubby doesn't know the difference between a flower and a weed, so it's a miracle that the peonies have survived. Last week, Mom wanted to see how the peonies were doing. I took this photo while she was admiring the flowers.

Mom and Dad are now getting Meals-on-Wheels, which helps a lot. They resisted the idea for a long time, but cooking was never one of my Dad's skills. Now he realizes that he has one less thing to worry about.

Mom is also getting physical therapy again. She really doesn't move unless she has someone encouraging her to do so. She complains that she worked hard all her life. 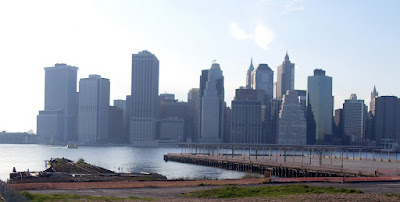 We made another trip to Brooklyn this week. Daughter #2 had to water the plants in her apartment, pick up her mail, and pay her bills. As we traveled along the BQE, she pointed out some of Brooklyn's high points. Above is a photo I took of Manhattan from the BQE as we were moving very slowly in rush hour traffic beneath the Brooklyn Promenade. One of these days, I'd like to walk along the Promenade and view the skyline from there. But it seems I'm always underneath the Promenade in a moving vehicle.

At last we reached the Garden State Parkway. The photo above is Matawan Creek--taken from our car. I know it is not as impressive as a cluster of skyscrapers, but I like it.

Daughter #2 is still recuperating at home. She's improving everyday. :^) It's been nice to chat with her everyday. Daughter #1 went along with us to Connecticut this past weekend to attend our grandniece's First Holy Communion. It took over three hours to get to Connecticut and it took three hours to return, which was plenty of time to talk. One topic that keeps coming up is dating. My daughters are lovely and intelligent, but they are very discouraged by the dating scene. Yes, they've met plenty of men, but the dating rules have changed--and not for the better.

When I was young, men paid for the date. That was the accepted protocol. If a man wanted to enjoy a woman's company, it was understood that he forked out the cash.

Today, women often pay their share. While going "Dutch" is fair, it does nothing to prove whether or not a man is serious. Where's the commitment when a man never offers to pay for dinner, or the movies? If he wants a woman, he should make an investment.

Furthermore, there is a problem with what constitutes a date. One of my daughters met up with a guy who treated her to the Dollar Menu at the local fast food restaurant and then mentioned that he had a mattress under the cover of his pickup truck.

That is not a date.

My mother, who is now 87, always told me that men only want one thing. She has always been right on that score. Men will take what they can get. However, in the past, at least there were some very definitive rules for courtship. If a man was serious, he knew he had to pull out all the stops and woo the woman in the proper fashion.

I was lucky. I was courted by my hubby. He took me out and paid for the dates. He was old-fashioned and that was fine. He was really serious and looking for commitment. He made falling in love a wonderful experience.

But I'm sure there are plenty of women who have had terrible dates--worse than those my daughters have gone through.