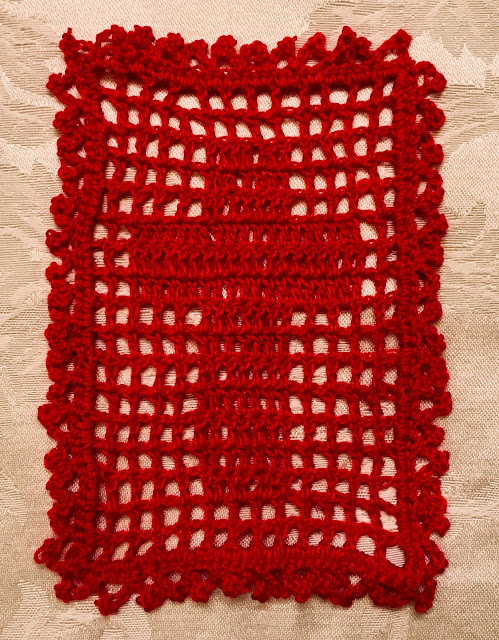 I enjoy making prayer squares. They are small and I can easily carry them anywhere with me. I pray for the recipient of the square while I work. Our prayer shawl ministry usually hands out bunches of these during the Christmas bazaar at our church.

I have many different patterns but I decided it would be nice to try one in a filet crochet pattern. However, I couldn't find the sort of pattern I wanted. So I made up my own. It may not be written in proper crochet lingo, but it's free for anyone who wants it. Have fun!

Using a number 11 crochet hook (you can use a larger hook but the square will be larger), and crochet cotton thread size 10, chain 31.

To finish, single crochet all around the edge.

Because we have to.

I'm giving a presentation at the library about formatting a book to upload it to Smashwords and Kindle. It was something I learned to do because some of my books became orphans. Either the publisher who held the rights went out of business or they had too many books and returned the rights to me. It has happened to other writers as well. Publishing is a tough business.

I wanted to offer something hopeful at the end of my talk. I browsed through Pinterest and found the quote below. It was not a clear image so I went to Canva and sharpened it.

The quote comes from Dani Shapiro from a blog post she wrote on June 21, 2012. You can read the entire post here. 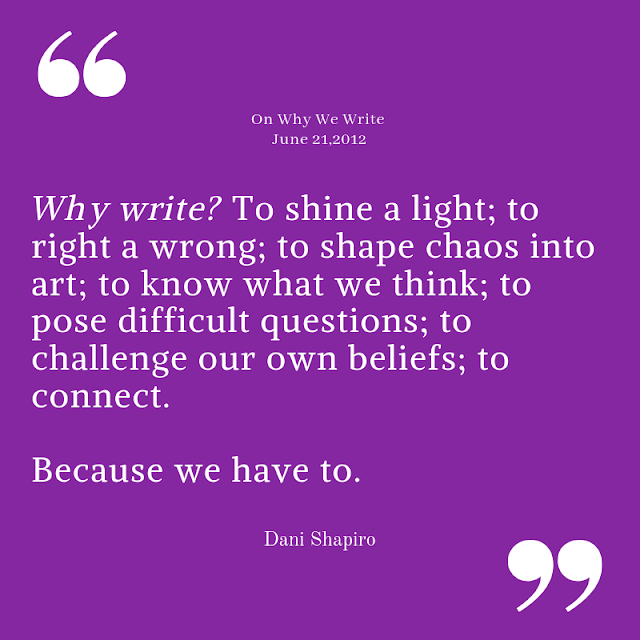 Aunt Grace's Instructions On How To Catch A Man

This is a photo of Aunt Grace, my favorite aunt. Intelligent and out-spoken, she was my mother's sister and one year older than Mom. Aunt Grace suffered with a heart problem all her life, but that did not stop her from keeping up lively conversations.

An inveterate letter-writer, her letters were treasured by all. Of course, she always gave advice, whether anyone asked for it or not. Once, Aunt Grace wrote a letter to my mother concerning one of my sisters. Aunt Grace firmly believed it would be easy for my sister to catch a man using this technique.


Tell her to get a baby tiger, put it on a leash and walk down the streets of New York, or the boardwalk at Atlantic City. I guarantee if she does it every day she'll get plenty of attention. Tell her to wear an Angora sweater, a skirt with a slit up the back, highheeled slip-on shoes. Hair tousled "casually". Or maybe a little Corgi, a long red, or tartan cape, black stockings, a large red velvet beret, and a heavy upholstery fabric peasant skirt (I like this better--dramatic, yet with flair, and just right for her outdoors image). The floppy hat would work well with this second outfit. Then, of course, how about the long cape, a short tousled haircut highlighted with gold or titian, long earrings the color of her eyes, with matching junk jewelry. The cape over a bright blue leotard matching the earrings. Nothing under the cape, of course, but the leotard.

I think I like this last idea best of all! What drama. This time she can forget the tiger or dog, and carry a knobby cane--the better to hit them with if they try to mug her. Again, locale is Atlantic City, or maybe Southhampton, or Harvey Cedars on Long Beach Island. There is money, big bucks in all those places. Of course in Atlantic City she'll have to take herself and her costume into a casino, and see if she can get eyes riveted on dice or the roulette wheel riveted on her. But, it seems like a good way to spend a couple of weekends. You can chaperone her from the rear just in case weirdos are attracted to these outfits. Frankly, I think she could carry all this off very well. It's a change from her job.

Now why didn't I do all this when I was young? I settled for turtleneck shirts. I'm so conservative in my dress today it's just plain disgusting. If something will be out of style in twenty years I don't buy it. Hence I have lots of clothing that dates back 25 years. Honestly.


Aunt Grace had a fantastic imagination! I miss her, but she left us a wonderful legacy in her letters.

Labels: how to catch a man, letter writing 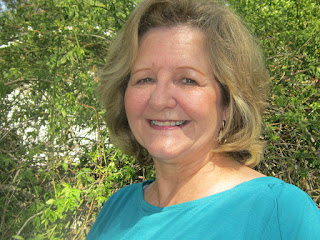 My guest today is Valerie Massey Goree, an American Christian Fiction Writers Genesis Award winner. She resides with her husband on the beautiful Olympic Peninsula of Washington State.


After serving as missionaries in her home country of Zimbabwe and raising two children, Valerie and her husband moved to Texas. She worked in the public school system for many years, focusing on students with special needs. Now retired, Valerie spends her time writing, and spoiling her grandchildren.

Check Valerie’s website to learn more about her books: www.valeriegoreeauthor.com

Valerie loves to hear from her readers. 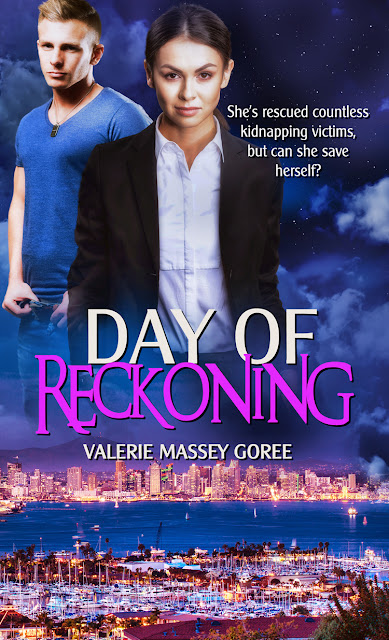 The exciting plot for DAY OF RECKONING:

International Retrieval Organization Agent Lela Ortiz is assigned the kidnapping case of businessman, Chuck Davenport. When her boss allows Jay Vashon, Chuck’s brother-in-law to assist, Lela accepts the help with reservations, especially when Jay prays at the most inopportune times.

Jay would do anything to help bring Chuck home, even work with feisty Agent Ortiz. As Jay and Lela decipher clues Chuck sends to his son with special needs, they are forced to work in close proximity.

Can Jay break through the barrier Lela has constructed around her heart? Will Lela be able to overcome her distrust of men and God?

And Chuck? Can the pair locate him before the ransom deadline?

And now for an excerpt!

Three shadowy figures closed in on Lela’s position. She held still as death. If the men found her, they wouldn’t hesitate to shoot. Her scars itched, but she couldn’t rub them. Instead, she mentally repeated the words that sustained her in dangerous situations. I am in control. He can never hurt me again. I have the skills to keep myself safe.The quivering in her leg muscles subsided.

One of the men stopped. Lela edged sideways behind the stout trunk of a human-sized cactus. Too close. Efficient as a scalpel, the stiff spines drew drops of blood that oozed down to her wrist. She bit her lip and made a fist.

Sweat beads stung Lela’s eyes. She dared not wipe them away.

Another voice. “Are you sure you saw something suspicious?”

“You need glasses, ’cause all I hear is night critters. Come on. Let’s get back to the house.”

Seconds stretched into minutes before the men shuffled away. Their muffled voices faded into the warm, starless night. Lela’s jaw ached. She relaxed her clenched teeth and peeked out. A dim light silhouetted three bulky shapes on the front porch of the ranch house. One man circled to the rear while the others entered the house and lights popped on in the side windows.