For the past six years, hubby and I have traveled by ourselves to Florida during the summer to visit hubby’s mom and dad. Our daughters were very busy during those six years. They were in graduate school, or working, and unable to join us. Babci and Dziadzi took a plane a few times to come up and see them.

This year we got lucky and two of our daughters were able to schedule vacation time so they could along for the ride--Daughter #1 and Daughter #2.

The last time they went on a road trip with us, they were barely adults. Now they’re all grown up and responsible.

Daughter #2 intends to learn how to make golombki from Babci. Daughter #1 has plans for us to go on a day cruise past the homes of film stars.

I brought along my Alphasmart in hopes that I can add another chapter or two to my manuscript before we return home. And I did do a little writing today even though hubby was driving and listening to one of his polka CDs.

But when the skies opened up and the rain poured down on our little car, I got nervous and stopped writing. Fortunately, the rain did not last long, but afterwards we stopped for lunch and then I took a turn driving.

I listened to my Peter, Paul, and Mary CDs while I was driving. I like to sing along with them. :^)

But I don’t know what our daughters will want to listen to when they take a turn at the wheel. I guess I’ll learn about some newer music.

I had searched the web to check out motels before we left home to see which had the best deals for our stopover on I95. I picked one which included a full, hot breakfast. Hubby gets all excited about a big breakfast, which he seldom has at home since he is supposed to be watching his cholesterol--and he does for the most part.

But this is a vacation. So we all had bacon and eggs this morning. :^)

Lunch was a Subway sub at a truckstop in Georgia. Daughter #1 took the wheel when we finally reached I75. Her musical selections were surprisingly eclectic. First, she slid in a Johnny Cash album. The second one was Bruce Springsteen’s Born To Run, and the third--at hubby’s request was Preservation Hall’s Dixieland Jazz.

At one point, when I was driving today, I was cruising along listening to a Bread CD. My daughters said it put them to sleep--although hubby liked “If” and thought it would sound good on the accordion.

Hit several downpours, but they cleared up quickly. Wrote a little bit more on my manuscript.

Finally reached Babci and Dziadzi’s house at 7 p.m. We were all dead tired.

Day 3:
The first order of business was the flea market and the laundry. Daughter #2 had packed light, and needed to wash clothes. So she stayed with Babci while hubby, Dziadzi, Daughter #1 and I went to the flea market. I wound up buying a plastic butter dish and a little magnet so hubby will know whether the dishes in the dishwasher are clean or dirty. (Very useful item.)

When we returned home, I got some down time while hubby, Daughter #2, and Babci went to the Polish deli. I polished up some of the writing I did while we were driving along the road--but I didn’t get much time to work for soon it was lunchtime. Then we went to the library to check our email. The library has a new policy for guests. We had to pay $1 to use the internet. Daughter #2, who brought her laptop used the free wifi. 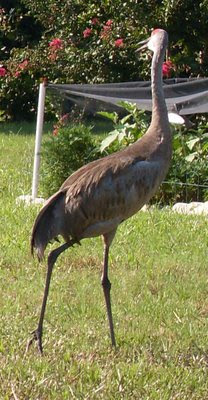 Babci and Dziadzi always go to 4 pm Mass, so we went, too. On the way back we saw a herd of sandhill cranes walking through someone’s yard. Birds that are as tall as full-grown humans are rather scary.

After supper, we went to the beach at Anclote River Park. A couple who sat near us, told me about Key Vista Park--a nature preserve nearby--which is very nice, so I’m hoping we’ll get a chance to do some exploring there.

I got about a half hour to do some more writing later in the evening, but I felt guilty about it, like I was being anti-social. Besides, we have heard some interesting stories that we’ve never heard until now. Of course, there are the ones we’ve heard a zillion times being repeated, but one that never came up before was the one about how Dziadzi took out his own tonsils. Not even hubby heard that one.

Of course, Dziadzi used to boast how “he no need doctor, he doctor himself.”

So once, when Dziadzi was a young man, newly immigrated from Poland, he shared a room with five other guys. When it snowed, the snow would come inside.

Dziadzi got very sick. His throat swelled up, which made it tough to breathe. He had no money for a doctor. He had a fever. He coughed so much that he coughed up his own tonsils and he hasn’t had a cold since.

We went to the Gunn Highway Flea Market. Both of our daughters needed pots and pans and I’ve found those in the past at one dealer at this flea market. Luckily, she was still there. I got a pot lid for one of my Farberware pots, too.

We went to a winery on Route 52 which we had seen on our way into Port Richey. Naturally, we all bought bottles of wine after the tasting. 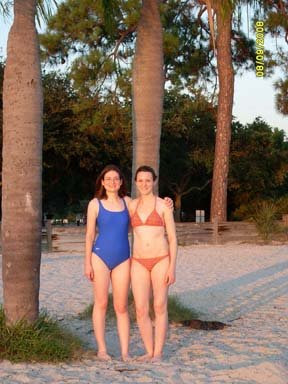 We went to the beach again. Hubby loves the hot water here in Florida. According to the newspaper, the water is 90 degrees. I like to swim in cooler water, but I’m the only one who knows the way to the beach. So I went along again, with a pen and paper and jotted down more ideas for my book while everyone else was playing in the water.

Then when we got back to the house, I incorporated my scribbles into the Alphasmart while everyone else took turns showering. I’m not adding a lot to the manuscript, but it’s better than adding nothing.

Spent a lazy morning in the house and had a bit of time to write. We had reservations for a boat cruise at 1 pm on the Miss Daisy II to see the homes of some famous people who lived along the Pithlachascotee River like Gloria Swanson, Babe Ruth, Shirley Temple, and others. 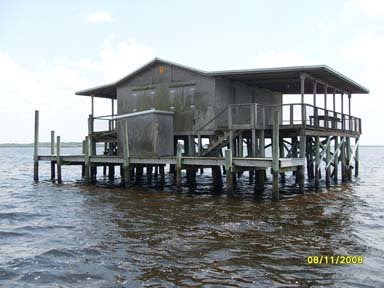 The most interesting part of the cruise were the stilt houses in the Gulf and the dolphins.

Babci came along for the ride, but Dziadzi was worried about having to walk too far to the boat. So again, he stayed home.

He’s really in his own world most of the time. He walks around muttering and fussing over this and that. Yesterday, he was angry because the placemats weren’t on the counter.

But I have no idea what he was muttering about today--because, of course, he grumbles in Polish and the only words I seem to be able to understand are the Polish swear words.

After our boat cruise, we went to the library again to check out the web. I was looking up motels for the return trip.

Babci and Dziadzi know nothing about the internet. Of course, they forgot how to work the microwave. “It no work,” says Dziadzi. I plug it in and it works fine.

They do watch a lot of television.

For supper, Dziadzi wanted to go to the pizza buffet restaurant, so we did. Afterwards, he wanted to watch a TV show that started at 7 p.m.

So hubby, our daughters and I went to check out the nature preserve we passed by the other day.

Day 6:
Another lazy morning. Daughter #1 got up before I did! 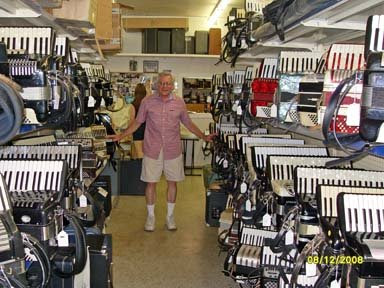 Before lunch we went to the accordion store which hubby visits once a year when we’re here.

We saw a pierogi restaurant and stopped there for lunch. The pierogis were excellent!

From there we went to Tarpon Springs to get some souvenirs. We were lucky that it was cloudy because it was much cooler than it usually is.

That evening Babci was trying to give away whatever we would take with us--but the car really cannot hold much more. I accepted a wooden Polish plate--handcarved, which I’ll give to Daughter #3 who could not come with us since she was presenting a talk at a conference.

Daughter #2 accepted a bunch of kitchen implements. Babci has a recipe book--handwritten in Polish and she translated those recipes while Daughter #2 wrote them down.

I got almost a whole hour to write while everyone else watched the Olympics on television, but then it was time to turn in since we have to get up early for the start of our drive home.

Got up at six and rolled out of the driveway with gray clouds overhead. Once we got into Georgia it began to rain--and it kept right on raining.

Rainy road trips are not fun. However, I did quite a bit of writing done. When it was my turn to drive, I listened to Jim Croce, Patty Loveless, and the Dixie Chicks.

Hubby played all the CDs our daughters have given him as presents. A scary music CD, a Zydeco CD, and his new Jimmy Sturr CD which he bought in Florida. Daughter #2 asked if he ever got tired of listening to Polkas.

Up at 6 am, had our Continental Breakfast and got back on the road. I did not do any writing. We stopped at a marvelous truck stop and I bought coffee and a magazine. I drove through much of Virginia listening to Daughter #1’s Forrest Gump soundtrack. It has lots of great songs from my generation. :^)

Stopped in Bowie, Maryland for lunch, and then visited with Sister #2 who lives in Annapolis. Did not stay long because we all want to get home--back to regular email and our own beds. 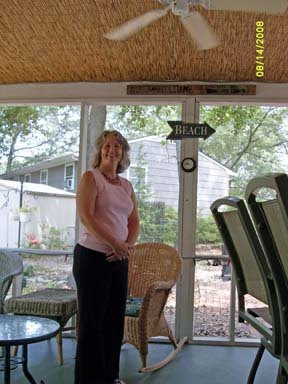 But seeing Sister #2, however briefly, was fun. She has made her back screen porch into a Tiki bar. There are strings of flamingo lights and chili pepper lights. The ceiling has bamboo reeds stapled to it.

We got home around 7 p.m. and decided to go out for pizza.

Later, I loaded the writing I had done on the Alphasmart into my computer. I wrote a total of fourteen pages while we were traveling. :^)
Posted by Penelope Marzec at 8/17/2008 01:35:00 PM 4 comments:

Right now you can see only the four stars, but by the end of this month the full review should be there.

Go to:
The Keeper's Promise at Romantic Times BookReview Magazine

There is also a link to the book trailer video I made. However, that link will only be on the site this month.

I have an interesting interview at the Romance Junkies' Cocktail Hour page. It has photos, too.

You can see that at:

I have been spending most of my time writing book #10, which I have titled The Fiend of White Buck Hall. I've made considerable progress on it and it is coming together well. It's a historical paranormal.

Last weekend, I took a break from writing. Hubby, Daughter #1, and I went to visit Daughter #2 in Brooklyn. Daughter #2 took us on a long walk to a park by the East River. It was a beautiful day and I took a picture of my lovely daughters and hubby--and the Empire State Building.:^) 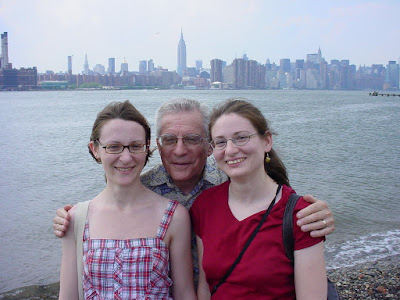