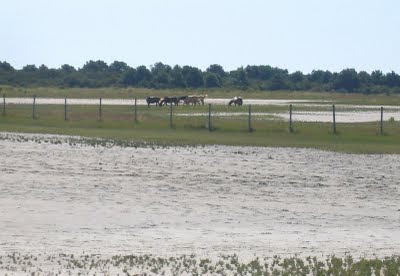 Many authors have promoted worthy causes and influenced readers’ opinions. Philip Freneau, the poet of the Revolution, rallied patriots to the cause of freedom. Rachel Carson sounded a warning about the grave danger of synthetic insecticides when she wrote Silent Spring..

Harriet Beecher Stowe helped to abolish slavery in this country when she wrote Uncle Tom’s Cabin. She did it with fiction. (If you haven’t read her book, you should.)

Not all authors set out to change the world, but all have the potential to do so. Some—like me—intend to entertain and offer their readers hope in the beauty of everlasting love.

Other writers do not expect to change the world—only a small part of it.

Marguerite Henry was given such an opportunity. As a children’s author, her publisher sent her to Chincoteague, Virginia, to write a story on the town’s wild ponies. Ms. Henry stayed at Miss Molly’s Bed and Breakfast, visited the Beebe Farm and forever immortalized Misty, the little filly who is still loved by millions of children. It wasn’t quite the same as fomenting a revolution, but the book’s popularity has endured and among other things provided a booming tourist trade for Chincoteague.

We visited Chincoteague through a Road Scholar program. Last summer, hubby and I joined the Road Scholars and journeyed to White River Junction in Vermont to learn about the railroads of that area. You can read about that adventure here.

Road Scholars’ motto is “Adventures in Lifelong Learning.” An elderhostel, their programs are all-inclusive. In addition to all meals and lodging, they provide participants with lectures, excursions, and other experiences so that they can understand more fully the culture of the area.

We were treated to the seafood at various restaurants on the small island. We learned about the wild birds of the area, watched an artist demonstrate her skill in painting a duck, and saw a decoy carver fashion a sandpiper from a block of white cedar. We listened to the music of the Three Sheets. We heard the tale of a waterman and how he spends his days catching crabs or gathering oysters.

We also went on a safari of the interior of the wildlife refuge.

We heard about the history of Chincoteague and how the ponies came to the island.

Nearly every shop has copies of Misty of Chincoteague by Marguerite Henry. You can see Misty and her foal, Stormy, at the museum in town. They have been preserved by a taxidermist.

Every year in July, the ponies are rounded up to swim from Assateague to Chincoteague. Thirty thousand—or so—people come to witness the event immortalized my Ms. Henry in her book.

How’s that for influence?


Whatever you write, write well. 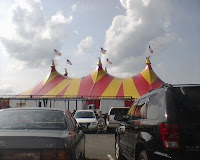 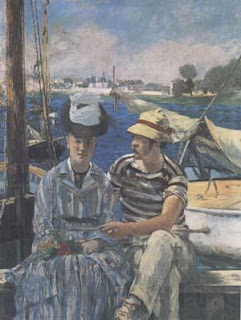 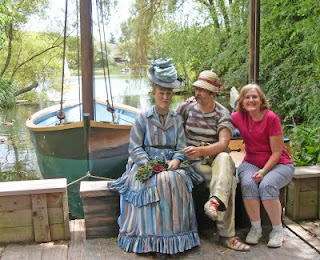 Manet painted The Boating Party. Seward Johnson made it into a life-sized reproduction. And I put myself in the picture, just for fun.

If you haven't visited Grounds for Sculpture, you should. Seward Johnson founded it and many of his works are there. However, many other artists are featured there as well.


We were there last week because Daughter #3 had some of her pastels displayed in a special exhibit. 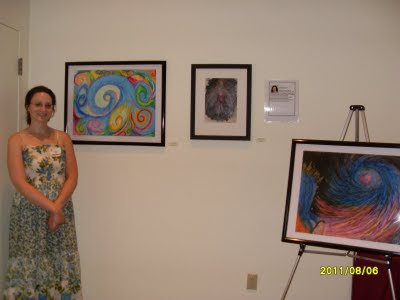 Grounds for Sculpture is incredible. I would love to go again--soon. I highly recommend it.

Last week, a friend asked me what software I use to write my books. I was a bit surprised by the question. I just type my novels into Word. The publishers want the books in Word, or Word's rtf--depending on the publisher's preference. I don't know of any other authors who use a special software to create their stories--and I belong to several writing groups. None of those groups has ever had a workshop on writing software. Of course, I only belong to fiction writing groups. We all make up stuff in our heads and I don't know how that could ever be programmed. :^)

I went online and discovered a wealth of software programs for those who want to write a book. Some are very expensive. You can see a bunch of them here.

In looking at the features of the various programs, I must admit that having a program to help organize an index for a non-fiction book would probably be a good idea. However, for a fiction book, there is no index.

I have attended many, many writing workshops. I have read many books on writing. I have had my work critiqued. I own several dictionaries and I am a frequent visitor at dictionary.com. I have a favorite thesaurus. I write my own outlines and if I need to brainstorm, I call up a friend.

Word count and spellcheck are built into Word, but it's always good to have a real editor because Word can screw things up.

I think the best aid to help any writer in getting the job done is to put glue on the chair and sit down. Then just write and keep writing. Don't stop until you've reached the end.

This cookie recipe is an old favorite. There's some real good nutritious stuff in these cookies so I think it is perfectly acceptable to eat them for breakfast. Everyone in my family agrees. :^)

Preheat oven to 375 degrees. Prepare 2 large cookie sheets with parchment paper. (Or you can grease them, but the parchment paper makes cookie baking easy.)

The original recipe called for pecans, but I like walnuts. I also substitute a small amount of shredded coconut for some of the carrots--if I happen to have the coconut. The original recipe called for dropping teaspoonfuls of batter onto the cookie sheets and baking the dough for 10 minutes. However, the cookies came out puny. I like big cookies so I use a tablespoon.