Samantha's tour of the house turned out to be rather brief. David hadn't realized how small the cottage really was. A kitchen, a pantry/utility room, a living room, one bedroom, one bathroom, and a screened-in porch. No basement, no attic, no den.

A cooling breath of air fanned David's face as they stepped back out onto the porch, the best feature of the tiny house. Four wicker chairs and a low table formed a cozy seating arrangement.

Samantha sank down onto one of the chairs and David did the same. James crawled into his lap.

"So how am I supposed to catch the mosquitoes?" he asked.

"You stand outside and naturally, some mosquitoes land on you."

She gave him a tremulous smile and he blinked to prevent himself from being mesmerized.

"What if I swallow it?" David interrupted.

He watched her long, thin fingers smooth out her gauzy skirt. Everything about her seemed so soft and feminine that he almost felt he could relax. He wrapped his arms more closely about James. No. He couldn't let down his guard. Not with her. Not with anyone.

He glanced outside at the endless miles of salt hay and at the blue water beyond that. It would be safe enough, he guessed. "Anyhow, then you put the live mosquito--because, of course, it must be live to test the pesticide--into a small cardboard trap--with a screen on it, so it can't get out. I'll do all the rest. It isn't difficult."

"So I'm a sitting duck. I stand outside, get eaten alive by bugs, maybe catch a few--"

"You have to catch a lot," she broke in. "This part of the study is very important. I have been breeding mosquitoes in the lab and testing the pesticide on them, but I need a control group, a totally unrelated batch of mosquitoes."

"Can't you just take your vacuum cleaner outside and draw in a million of them?"

"You would hurt them!" She frowned.

"Heaven forbid," he stated in a mocking tone.

Her eyes sparked flint at him. He leaned back in the chair, feeling the heat from her searing gaze. James sighed as his eyes began to close.

"It's extremely important research," she reminded him.

David didn't doubt that the earnestness in her face could convince Congress to appropriate trillions of dollars in funding for her cause. Then he reminded himself that right now, he and James needed a safe haven, and this could be an ideal situation.

"Okay, okay." He tried to sound apologetic. "There are nasty viruses and we must do something about it. So when do I start my human pincushion routine?"

"Tomorrow. Today is Sunday..." Her voice trailed off and she glanced into the distance.

Simply the thought of anything religious made him defensive and he stiffened. He had seen nothing but hypocrisy in his dealings with supposed "Christians".

She whipped her head around and stared at him with such surprise in her expression that he had an urge to touch the top of his head to make sure he hadn't sprouted horns.

With a voice that sounded hard and bitter, even to his own ears, he gave her his version of the world. "Everything that happens here on this earth is random. Good people meet up with terrible tragedies and very evil people do remarkably well during their lifetimes. Why would a god, who supposedly loved his creations, treat them so cruelly? Why would he make them suffer? The good guys don't win. Honesty is not the best policy. The clever liar will always have a better life."

He didn't add that women who are monsters get custody of their children. He couldn't say it because he knew he was guilty of not spending enough time with his own son. He should have known, but he had been too busy.

"I can understand how you might feel that way."

Her voice had such a tender quality to it that for a fleeting second he actually believed her and thought she might be capable of understanding his predicament. Then his better judgment returned and he glared at her, fully expecting her to clobber him with sermon number one, a compassionate plea aimed at getting him to come back to the fold.

However, she surprised him by not saying another word. The silence hung between them like the heavy atmosphere on the muggy afternoon. She turned her head to stare off into the distant, hazy horizon. He hesitated. She seemed so vulnerable for a moment. He noticed her hands tremble slightly and she bit her lip.

He shook himself mentally. She was probably feeling tainted by sitting in close proximity with a heathen. She might be regretting the fact that she had hired him.

He glanced down at James. His son had fallen fast asleep in his arms.

"I guess I better show you to your room," Samantha whispered.

Though he tried not to move suddenly, the moment he got out of the chair, James woke up again.

"Put me down, Daddy!" James insisted.

David sighed. From this point on, he knew James would be completely wired and impossible to deal with unless he got a nap.

Samantha led them across the yard to the lab building, a low concrete structure. She ushered them into a small hallway and then unlocked the door on the left. When she swung it open, David sucked in his breath as an overwhelming sensation hit him. The small, austere room reminded him of a cell--maybe it was the color of the walls, a sickly, institutional green, or maybe it was the cheap metal furniture. Or maybe it was a premonition. He struggled to recover his regular breathing rate and force down his fear.

Samantha crossed over to the small window and opened it. "I'm sorry it's so stuffy in here. I have a fan in the lab you can use."

Meanwhile, of course, James bounced into the room and opened the wardrobe along with every drawer. He lifted a black book out of one.

James opened it. "There aren't any pictures."

"No. But there are lots of stories."

James frowned at the dull-looking book and dropped it back into the drawer. "Bunkbeds!" he squealed as he clambered up the ladder. "Can I sleep on the top?"

"Look, I can touch the ceiling." James reached up with just his index finger.

"You're taller than your father, now." Samantha smiled.

"I am!" James looked ready to burst with delight.

David felt a painful squeeze around his heart at the unbridled joy in his son's face.

When Samantha showed them the tiny bathroom, James grabbed the faucet and turned it on full force. Water splashed out over the sides of the small bowl. "James! Stop it!" David roared. He slapped at James' hand and switched the faucet off. James' tiny shoulders shook and his face crumpled. David clamped his jaw together. He knew that James' tears would be next. Would Samantha decide that she had made a mistake in bringing him and his son here? However, Samantha simply turned to a small closet and got out a bucket and a sponge.

"This is Mr. Spongy, James, he can wipe up any mess." "Hello, James." Samantha, using a silly voice, folded the sponge in her hand and made it open and close like a mouth. One tear rolled down James' cheek, but he immediately started to smile. "Hi Mr. Spongy."

"I am so thirsty, James, can you help me drink up this water?" Samantha handed the sponge to James who eagerly tried to make it talk, too. Then David watched in amazement as she patiently showed James how to wipe up the mess.

Once that was finished, Samantha left them to settle into their new surroundings. James went back to the drawer with the Bible. He took it up to the top bunk with him and started turning the pages.

"The big lion ran after the little boy to eat him up." James made up a story for himself.

David went to the window and looked out over the desolate marshland. He could see nothing but miles and miles of short grass interspersed with narrow waterways stretching to the blue sea beyond. Would he be safer in a forest, or at the top of a mountain? He shrugged. For two weeks, this would probably be okay.

When he turned back to check on his son, he found the child fast asleep with the Bible beside him. David eased the book away and put it back into the drawer. Just the sight of the book irritated him. Based on it, he was destined to a fiery eternity. Well, better that than watch his young son suffer. He stood beside the bunk bed and listened to the child's even, light breathing. Suddenly, he felt wearier than he had in weeks.

Bernadine is the winner of a print copy of Sea Of Hope! She commented on the excerpt from that book which I posted on this blog. Anyone who commented was automatically entered into the contest. 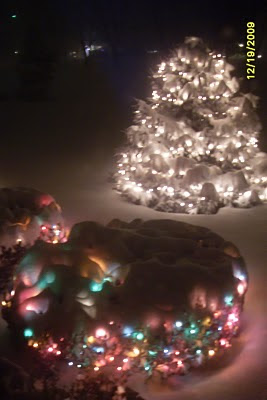 I went to the New Jersey Romance Writers' Christmas party today and I brought along my Frito Pie. I never make this recipe at home because it is loaded with sodium. However, it is easy to make and very tasty--the perfect dish for a party because at a holiday gathering nobody is being mindful of their diet anyway. :^)

I originally clipped the recipe from an issue of Woman's World magazine, but I adapted it slightly by making it nearly twice the size.

Preheat the oven to 350 degrees. Spread 1 bag of corn chips on the bottom of a 9 x 13 pan. Lightly, crush the corn chips. In a large bowl, combine the chili, beans, and onion. Spread that mixture over the corn chips. Sprinkle with the shredded cheese.

Top with the remaining bag of corn chips--except for a few which you are allowed to eat because you are burning calories putting this wonderful food together.

Bake until hot and bubbly--about 30 minutes.