Hubby and I went to see Flyboys last night. Hubby loved it. He was still thinking about it today and what a great movie it was.

I found much of it nerve-wracking but it was definitely worth seeing simply for the cowboy, Rawlings, played by James Franco. He is a classic hero. Unfortunately, it was rather easy to figure out which of the other characters were expendable.
Posted by Penelope Marzec at 9/23/2006 02:33:00 PM 3 comments: 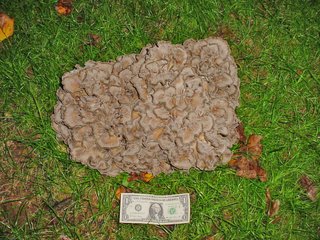 Every year aroung this time, a fungus grows in our yard. Hubby thinks this is a fabulous fungus. It seems to get a bit bigger every year. Should we be worried?

Hubby put the dollar bill in the photo so it is easier to see how big this mammoth fungus is.

I've been busy with my real job this week. In addition to work, I had to attend a workshop on Thursday night. Plus I am trying to write as much as possible. And I'm still exercising. I know if I did not have my ebook reader, I would probably have no inclination to exercise. But reading an interesting book is my motivation.
Posted by Penelope Marzec at 9/17/2006 07:04:00 PM 1 comment:

Everyone has a story. 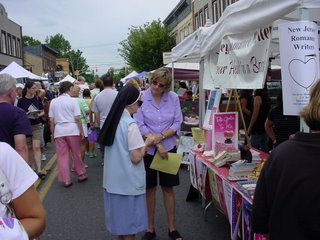 Here's a photo of a nun talking to Donna Birdsell. The nun had a story to tell about literacy. It seems that a lot of people have stories to tell--especially when they meet up with a bunch of authors. However, not everyone wants to write down their own stories. One couple told us about their wonderful love story--it would make a great book, they said. So we encouraged them to write it themselves, but they were not very enthusiastic about that.

Sadly, we found there are some people who insist they don't have the time to read as they passed by our booth. Personally, I cannot imagine a life where there is no time to read. Everyone winds up sitting in a doctor's office at some point. Lots of us wind up sitting in the DMV or the Social Security Office for hours. Some of us are lucky enough to sit on the beach once in a while. Picking up a book is a great way to unwind--or to get your mind off your troubles. At least it is for me.

Still, we met a number of enthusiastic readers, too. And some people who were already writing their own stories. So, of course, we invited them to join us at the New Jersey Romance Writers. I hope they will!
Posted by Penelope Marzec at 9/11/2006 09:50:00 PM 2 comments: 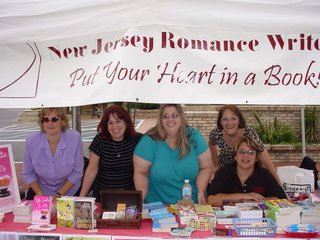 Today a street fair was held in Red Bank, NJ. Monmouth Street and Broad Street were blocked off to traffic so that pedestrians could walk in the street. The weather was delightful. Donna Birdsell, Lois Winston, Irene Peterson, Caridad Pineiro, and I spent the day selling our books, talking with readers, and encouraging some like-minded writers who would also like to become authors.

I cut the electric wire...

while I was trimming the yew bushes. I was using the electric hedge clippers. I've always feared them, but we have a lot of shrubbery and the hedge clippers do help finish the job quickly. I was getting toward the end of the task and I was tired, but I wanted to finish. I did not take heed of where the cord was and wound up catching it in the teeth of the clippers.

At first, I had no idea why smoke and sparks were coming from the clippers. So I screamed. Then I felt really stupid. Hubby has cut the electric cord twice that I know of, but he never screamed when it happened. He said a rather nasty word as I recall.

Anyhow, hubby was raking up all the clippings and was not the least bit put out that I had completely ruined an extension cord. Fortunately, we had another one in the garage and within a few minutes, I was clipping away again. The yew bushes look very neat now.

I've read a whole bunch of books this summer--most of them were the paperbacks I had on my to-be-read shelf. I wanted to read as many as I could so I would be able to make some room on the shelf. (That's one of the other reasons why e-books are great--they don't take up any shelf space.)

Of all the books I finished, only two stood out as "keepers." They were:

Ultra Violet by Ellen Henderson, a Silhouette Bombshell released in 2005.

These were both great reads that kept me turning the pages. While they are also no longer new, they are both available at amazon.com. Of course, I'm not giving mine away. I'm keeping them and loaning them out only to very good friends who I know will return them to me.