Ideas From A Walk In The Park

My NCP editor told me I should do another beast book since the readers seemed to like The Beast of Blackbirch Manor. So although I was having fun with my pirate book, I set it aside and started working on another book with another beast. I usually do not switch like that. I'm afraid I would never finish anything if I hopped around from one book to the next. However, the editor had a good point and I decided I ought to do my best to follow her suggestion.

Inspiration for the setting of the book was not hard to find. My daughters and I went for a walk in the park at dusk one night. It was nearly time for the park to close, but I had my camera with me and I wanted to take a shot of one little bridge near the water.

As we walked along the trail, the sky became darker. We heard the sound of a great horned owl high up in the treetops and when we looked up we could see the silhouette of the creature. The park that we enjoy so much in the daytime took on a rather creepy aspect. Our imaginations started to go wild and every little noise became frightening. Daughter #2 was sure she heard the stamp of heavy feet behind us--the kind a large deer would make. 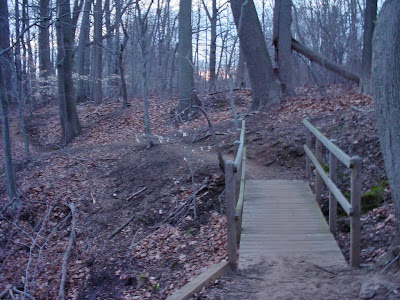 Quickly, I took a photo of the bridge. Then we hurried back to the car. The park ranger was hovering near the car. I'm sure he was glad to see us leave.

I was quite please with the photo. I put it on my desktop. The picture helped me describe the heroine's walk through the woods when she first meets the white buck. He's the beast. :^)
Posted by Penelope Marzec at 4/22/2008 05:36:00 PM No comments: 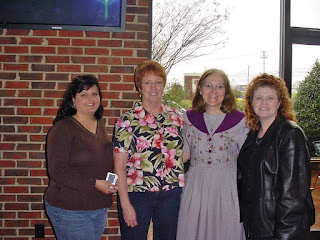 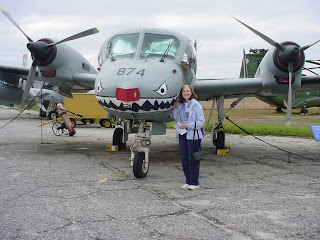 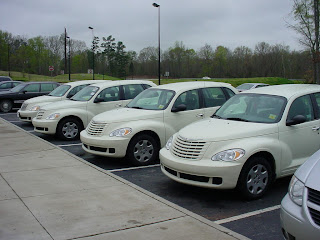 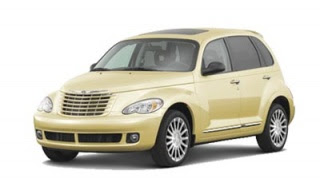 We now have a newer car--a vanilla 2006 PT Cruiser with 38,000 miles on it. Our old minivan had 175,000 miles on it and was 10 years old. Hubby thought it best to trade in the minivan before it needed a major repair. In addition, the PT Cruiser is a four cylinder car so it will get better gas mileage than the minivan.

The PT Cruiser is nice. Daughter #3 has one which is one of the reasons we thought we would get one, too.

However, I do miss the minivan. I spent a lot of time driving it--taking our daughters to college and back. We went on several family vacations with the car, too. It had a lot of good memories in it.