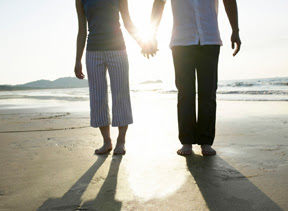 Today Daughter #1 is my guest. She will detail some of her dismal dating experiences. Please feel free to leave comments!

Thanks Mom for requesting a guest blog on a topic that’s been close to my heart lately. After yet another failed potential for a long-term relationship, I begin to wonder: why can't I enjoy an old-fashioned kind of courtship? The kind where we talk, get to know each other in a variety of situations, and learn to trust each other before we move towards intimacy.

My mother and I do not always see eye to eye on some aspects of dating and relationships. She lives and breathes romance, I’ll take hard sci-fi any day. I tell her that I don’t need my life to work out in the same manner as a contemporary romance. What we have agreed on is the diminished, if not completely absent, role of courtship.

I’m 34 and very single. My mother married at 26. I don't doubt I've been on more first dates than my mother. I’ve used several online dating sites and have not been satisfied with any of them. However, I also continue to meet men face-to-face at social functions and I find there isn’t much difference in whether I meet someone online or in person. It seems apparent to me that there is an entire generation of men who truly don’t understand the concept of courtship.

One of the most disturbing issues is the blatant use of false information. How can I be confident that these are honest men when they start off with a variety of lies? For instance, there was the poet who took artistic license with his age. “Early forties” does not translate to 47. The lack of trust was the reason that I let him go. If he lies about a simple thing such as age, what else is he telling me that may not be true?

I met a guy from one of my volunteer organizations, and we hit it off well. We had great communication, and he seemed really interested in me, until date #3. We went out for pho, nothing fancy, nothing very expensive—and he intended to split the check. I had been under the impression that since he invited me, he was treating me. He did pay, after a bit of a discussion. Later, we walked down to the river, and he suggested that we get a hotel room. Now, because he didn’t want to pay for dinner, I figured I’d get stuck with the cost of the room. Again, I refused—and learned that we had different relationship goals. I wanted a commitment. He wanted to sleep with as many women as possible—I would be simply another notch on the bedpost.

Recently, I reconnected with a man who I’d dated a few years ago. By chance, he landed a job working in the same building. I visited him once, just to catch up. However, he presumed too much on our previous acquaintance. He said he wanted to see me, he said he wanted a commitment. What he didn’t do was—well, everything. All he wanted was for me to come over to his apartment. No dates, no dinners, no walks in the park. Simply sex. No courtship of any kind.

I have a lot of male friends. However, they can be almost as bad as dates. They only want to see me for a specific activity at their convenience. One of them loves to hunt fossils. However, only when he wants to, not when I want to. Another of them only sees me as a kayaking companion. Again, no romance. I’m just one of the guys.

So, then what to do? If I’m not a sex object, I’m one of the guys. And sure, I enjoy many sports and scientific activities. But how do I convince a man that I’m a person—not a blowup doll? And what happened to simply taking a woman on a date, with no expectations for sex? What happened to simply enjoying a woman’s company and her conversation? What is this third date rule for sex that guys seem to constantly cite? I’d love to hear your comments.

I feel your pain, I'm older than you and still very single. I refuse to settle, even if I have to wait until I'm 50.

I think people who exaggerate are bad news, whether they are male or female.

I, too, found online dating about as useful as asking out the first five women I saw walking down the street.

Since things are going consistently wrong for you in terms of dating/meeting men, you might consider sitting down with a counselor and seeing if something is happening on your end to attract these people.

First off, what my daughter wrote is not in any way an exaggeration of the truth. Those three guys exist and behaved in exactly the manner she detailed.

Second, my daughter is not the only female finding a lot of toads in the dating pond. (Note: See Jenn's comment above.) The men my daughter dated were educated and well-off. But there are a whole lot of men who want sex, immediately. They date for sex. That's all. No commitments.

There are a dearth of gentlemen in the world. If you are one of the few remaining gentlemen, I applaud you.

I completely understand where you are coming from. I was late to join the dating world (waiting until after I'd accomplished my own goals of college and a career) and I found many of the same things you found - in person and in online dating. I don't think it's a matter of "attracting" these guys. I think it's just a matter of society (media, books, etc) applauding these types in a sense.

I did meet one of the "good ones" back in August and we've been dating since. However, now outside forces (jobs and geography) are suddenly coming into play.

Seem we are in an age where dating is becoming more and more difficult.

My advice? Continue trying and don't give up. In the meantime, enjoy yourself. :)

Exactly where I am in life, and much of what I've found, as well. It's hard to wait for the right opportunity, especially when so many others in your acquaintance seem to have the right chance drop in their laps.

As opportunities fail to pan out for me, I do take a step back and reevaluate my position. Not because I think I need to change my standards, but perhaps I could change my expectations. I'm looking for one man, THE Man, out of billions on this planet. Perhaps it's more realistic for me to expect this to take time and effort, rather than tripping over him my freshman year of college. Perhaps it's more realistic to expect guys to be put off by my adherence to goals than congratulatory.

I can spend my days and nights crying over the unfilled space in my life that I keep well-dusted and in good order, or I can dust, tidy, and do other things I enjoy. I won't stop looking, but I can't let myself be consumed by what I don't have. It's a subtle attitude shift that's easier said than done, yet worth the monumental effort.

As Jenn said, I'd rather be alone than with the wrong person. Yes, it hurts when your soul wants something that isn't present. There's nothing wrong with wanting romance, companionship, and a partner through life. But where is our focus? Where is our energy going?

The mantra I continue to hear, hate, and cling to is that the right one will love my naked soul more than my naked body, will want me for all the hidden things, and won't let externals drive him away. It's my job to love myself and my life regardless of others.

Hang in there, Sister. Don't give in to discouragement; you're not alone.

I completely agree and I think it is a very, very sad situation.

...the right one will love my naked soul more than my naked body, will want me for all the hidden things,

Such a beautiful thought. I hope you find the right one for you.

You're kind of young, but I do remember courtship. Then The Pill was invented, and Free Love became the thing everyone wanted. Women were told they wanted sex (which was true, but counterproductive) and not to be afraid to go for it.

Men realized that they truly didn't have to buy the cow when they could get the milk for free.

Now we have generations of men (and screenwriters-Boo, Hiss) who are accustomed to all the Free Milk they can drink, without responsibility physically, fiscally, or emotionally.

There are places where courtly men hang out, but they're not popular these days. I feel sad for you and for my own daughter, too. My generation did it to you, and there's not much anybody can do to fix things now. I am so sorry.

Oh, crud. Now I have to try to match the code. Wish me luck.

Men realized that they truly didn't have to buy the cow when they could get the milk for free.

My mother, who was born in 1921, used to use the cow an milk idiom all the time. She also used to warn me and my sisters that men wanted only ONE thing. That hasn't changed, but at least in the past men would make an attempt to woo a woman. Now men are blatant and simply expect sex immediately. It truly is sad.