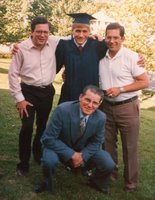 This is a photo taken many years ago of hubby, his father, his nephew, and his brother. Hubby is on the left, his brother is on the right. His brother is very ill. We went to visit his brother in Vassar hospital yesterday in Poughkeepsie, NY. It took us three hours to get there. Maybe it would have taken two and a half hours, but we did stop for coffee on the way.

His brother was happy to see us and didn't want us to leave. Hubby reminisced about old times with his brother and I talked about our daughters. We left after his brother's wife arrived. Stopped to eat supper on the way home, and then listened to hubby's Frankie Yankowic Polka music while driving to keep alert.

It's so hard to see our loved ones in the hospital suffering with an illness.

My prayers will be with you and your brother in law.

Thanks for your prayers Leann.