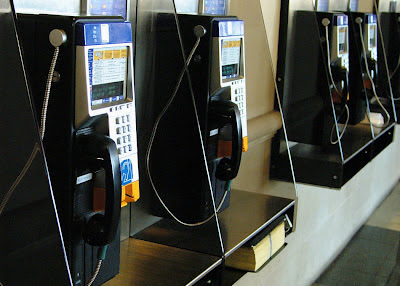 We had one car when I was young and Dad used it to go to work. He worked in Jersey City, but he spent most of his career on the graveyard shift because newspapers are put together at night.

I commuted to college in Jersey City. However, my father's schedule and mine seldom coincided. As a result, I had to walk a mile to the bus stop and hop on board the Red and Tan Lines everyday. I arrived at Journal Square in Jersey City approximately forty-five minutes later--depending on the traffic. From Journal Square I caught a bus that traveled along Kennedy Boulevard and reached the college in about fifteen minutes. If I had a class that ended at 6 p.m., I had a more arduous journey home because the Red and Tan, which was an express bus, left at 5:30 p.m. So I would have to take the local bus to the Square, then catch a PATH train to Newark, and then take another bus home--or if it was really late, I'd have to take a train.

When I arrived in my hometown, I would use a public pay phone to call home. I put in my dime, let the phone ring twice, and hung up. That was the signal for Mom or my brother to come and pick me up. I would start walking home, and if the car was available I would get picked up somewhere along the way. If not, I walked the entire distance, which seemed a lot longer in the evening because I was tired and hungry.

For four years, I cheated the phone company by hanging up the phone after two rings and taking back my dime. There's some irony in the situation because I wound up marrying hubby, who worked at Bell Labs. As it turned out, he had commuted to college also. He would signal his parents by ringing three times before he hung up.

Nowadays, there are fewer pay phones. When my daughter needs a ride home from the train station, she sends me a text message. It's so much simpler and far more efficient, plus her cellphone carrier can't complain because they get their money every month.

Memories big time. We used to signal each other when we arrived home after a trip, too. We'd place a call with the operator, she'd dial the number, saying "I have a collect call from ...", then I would say, 'nevermind, operator' and I'd hang up. My mother knew I was home safe and sound. The good old days, for sure.

Clever! I never used a collect call unless it was an emergency. We were so careful not to run up the phone bill.

Oh my, I can remember doing the same thing. Kids today would never believe how much that dime was worth and how hard we had to pinch every penny. But as poor as we all were, it seems like we were so much richer in things that matter.

Yes, every dime was precious. After all, back then you could get a gallon of gas for about thirty cents!