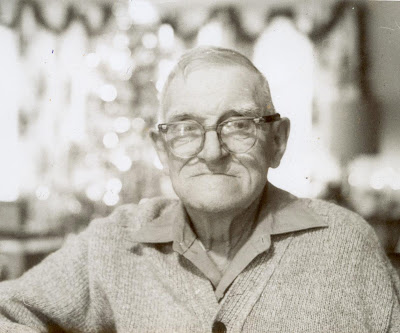 This is a photo of my paternal grandfather. He lived to be 86. His mother came to this country from Ireland as a domestic, and for the rest of her life she never wanted to go back to Ireland. She met her husband here in the States. They married, settled in Jersey City and had nine children. My grandfather was the oldest. He was short, like the rest of his siblings--a veritable brood of leprechauns. My grandfather had a dry wit and was always poking fun at anyone and everyone.

He came of age as World War I erupted. Given the job of cook in the trenches, he also had to retrieve the bodies of fallen soldiers.

After the conflict ended, he got a job as a jitney bus driver. Then he met my grandmother. She wasn't Catholic. At that time, marrying outside the faith was frowned upon. My grandparents were not married at the altar, they were married in the vestibule of the church.

He became a milkman and in those days, even in the city, the milkman delivered milk with a horse and wagon, early in the morning. It was steady work--even during the Depression. He and my grandmother had three boys. My father is the oldest. The second son died in World War II.

My grandmother's father owned a chicken farm. When he died, my grandfather could have inherited the farm, but he did not like chickens. He said they were always dying. He continued to be a milkman until he retired--although after a while the horse and wagon were replaced with a truck. :^)

After my grandmother died, Granddad continued to live in his house in the city. He helped out the neighbors and had his job at the polls during elections. Some of his siblings still lived in the old family home a few blocks away and they sent him homemade soup or meatballs. But he could cook up a very good Western omelet on his own.

He got cancer and stayed with my parents for a while. Then he had to go into a nursing home, but he was not there for long before he died.

He was a good father. He remained faithful to his wife, worked at a steady job until he retired, and then helped those around him. His children became hard-working honest men, committed to their wives and families, too.

My grandfather was one of the best, but there are many other great fathers in the world today--like my own hubby, my father, his brother, my sisters' husbands, and so many more. I want to wish all of them a Happy Father's Day.

Beautiful post. I don't even know that much about my Dad, and his Dad died when I was 1.
Happy Fathers Day!