Half-Way Up the Pyramid of the Moon 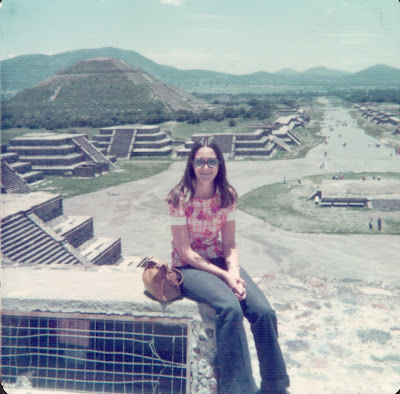 That's me, age 24, half-way up the Pyramid of the Moon in Mexico. I gave up climbing at that point. In 1974, I went to Mexico with my sister-in-law and one of her friends. My brother had died six months earlier, so my sister-in-law was a relatively new widow.

I had taken French classes in high school so I did not know any Spanish at all, but my sister-in-law spoke fluent Spanish. We went to several small towns of historical significance and then wound up in Mexico City. The small towns had been far more interesting to me for the glimpse of authentic Mexican culture. Mexico City was another big, international city and I had seen several of those by that point in my life. However, I had never seen pyramids so I happily hopped on a bus to spend the day climbing. But it was hot and I tired out fairly quickly. Reading about the pyramids was more fascinating than climbing them.

Labels: Mexico, Pyramid of the Moon

I like the pictures of you. I don't have many of me younger.
There was a big shootout at the Mexico City airport recently.

I wouldn't visit Mexico now because there has been a lot of violence there, but back in the 70s it was a great place to visit--inexpensive and close. Still, I would never have gone there without my sister-in-law. Being able to speak the language is very important.