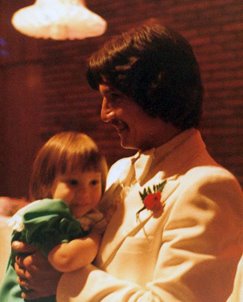 This is a photo of my cousin Hillbilly. He grew up in a house located on my grandparents' farm in western Pennsylvania. However, he visited with my family for a while and decided he liked the beach--so he stayed. He met his wife on the Parkway--he was hitchhiking and she picked him up. (Hitchhiking is prohibited on the Parkway.) They were married twenty-five years ago. In the photo he is dancing with our Daughter #1 at his wedding.

He was a bit of a daredevil and eventually got his pilot's license and bought his own plane. Twelve years ago, Hillbilly became a paraplegic--in an accident in his own backyard pool. His wife stuck with him until last week when she left him. He went into the hospital with infections in his legs. Hubby and I visited him last Monday. It was a depressing evening. His legs looked dreadful. He was transferred to a rehabilitation center on Friday and today my parents, Daughter #3, and I visited him there. We brought him lots of reading material. His legs looked a bit better. He was talking about selling his house and moving to Delaware--so he seemed to be handling the situation better. Daughter #3 got him laughing.