The Land of Once Upon A Time 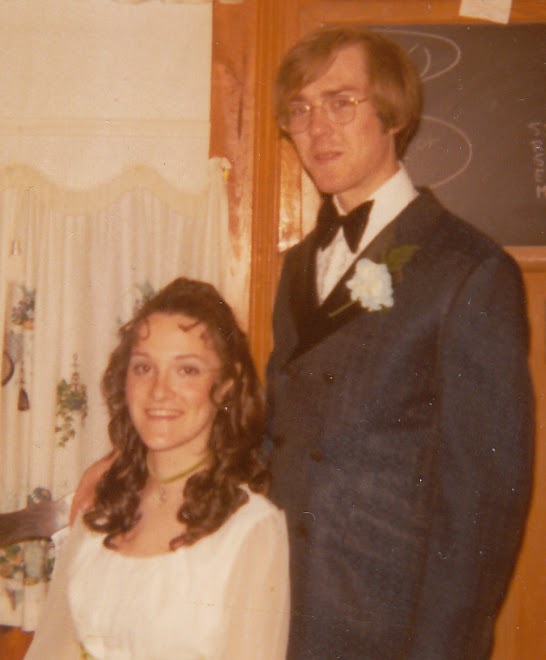 Yes, that's me with my date for the prom in college. I would not have gone to the prom if it wasn't for my brother. The young man in the photo was was one of my brother's roommates. My brother thought I should go out with him. So I did.

I did not go to the high school prom.

I believe my brother was a bit concerned about me. He was one year older than me, well-liked, intelligent, goal oriented, and energetic. From a young age he plowed into life becoming involved in community service with his scout troop and attaining the rank of Eagle Scout. He also belonged to several high school clubs and founded the radio club. He had tons of friends and even dated the French teacher's daughter.

I was painfully shy and didn't date anyone in high school. I was happiest staying at home to write, read, or help out with chores including the care of my two much younger sisters. I daydreamed as I hung clothes out on the line, concocting stories where I could be the heroine and win the love of a handsome, young prince. I fashioned beautiful ball gowns for my sisters' dolls, with leftover scraps of fabric. I mopped the floor and sang "Moon River" pretending I was Audrey Hepburn in the movie, "Breakfast At Tiffanys."

Audrey Hepburn was my role model since she was almost as skinny and flat-chested as I was. Dreamily, I glided through life, half in this world, and half in the world of Once Upon A Time. My taste in music, clothing, and books often all out of sync with the rest of my generation.

My brother drove an ice cream truck during the summertime and met an amazing array of girls. He and the French teacher's daughter broke up. He received tons of love letters in the mail. I found where he hid them in his room and read them all.

I didn't get a single love letter from anyone. One of my brother's friends asked me out but he was so hairy, he scared me. I imagined him turning into a werewolf. So I turned him down. I kept hoping that my handsome prince would come along soon, though there didn't seem to be a single one roaming the halls of my high school. In fact, most of the guys seemed to be more like toads. Except for the ones who were already taken.

My brother became president of his fraternity. He must have twisted a few arms to get some of his fraternity brothers to date me. One drove down the Parkway at eighty miles an hour and frightened me half to death. Another didn't talk--at all. The third one imbibed rather heavily. None of them asked me out more than once. I started to develop an inferiority complex.

Then came the day when one of my brother's red-haired young ladies dumped him. Personally, I thought she must be an idiot. He had already purchased tickets to an Andy Williams concert. Andy Williams sang "Moon River" and I thought he was the best entertainer in the universe. My brother had splurged and gotten really good seats.

He did not appear to be very upset by his rejection. No doubt, he knew he could have called up another young lady and gotten her to accompany him at a moment's notice. So nobody was more astonished than I when my brother asked me if I would attend the concert with him.

Feeling every bit like Cinderellla, I dressed for the concert with the utmost care. I got the corsage my brother had ordered for the foolish girl who had spurned him. That night was one of the highlights of my life. My brother treated me like a real princess. For the first time, I felt that I had really crossed into the land of Once Upon A Time.

Afterwards, I bought an entire book of Andy Williams arrangements for the piano.

My brother started dating only brunettes.

He continued to try to find a nice, young man for me. He joined the Air Force and passed my photo around the base. When I went to visit him, he made sure he had a date for me.

He found a sweet brunette to marry. He gave me advice, telling me how to emphasize my good points as his wife did. However, I was still shy, awkward, and unalluring.

He died when his plane crashed on a training mission in the New Mexico desert. His passing devastated everyone.

I was firmly convinced he earned sainthood and started organizing a radio club in heaven. I am also convinced that he didn't forget about his odd sister because two years after his death I met the man who became my hubby--and who happened to be an electrical engineer who could play not only "Moon River" on the piano, but the theme from "Gone With the Wind"--by heart.

And so, I write romances because I truly believe in Once Upon A Time. It happened to me.

What a beautiful and touching story, Penelope; one that could easily be turned into a script.

Thank you. I don't know about turning it into a script, though. I will think about that. :-)

I loved this true story. Such a tribute to your brother. You two were definitely night and day. You were blessed to have him. This is so well written. You should send it to magazines. Maybe some family life publication. Very good. Glad I read it.

The thing about shy ones...still waters tend to run deep. Good tribute to your brother. He loved you very much.

Yes, I was blessed. I wrote this piece many, many years ago for an anthology, but nothing happened with that. It was hidden away in a file folder--until last night. Still, chokes me up--even after all these years.

I don't know if another publication would want it now that I've posted it online, but that's something I could look into.

My mother always said, "Still waters run deep and muddy at the bottom." :-)

My brother was a very special person. He had a very generous heart.

Wonderful story -- and wonderful brother. My story was more like yours as far as my personal life ...

So touching! I'm sorry you lost your brother. I'm happy you met your husband
I lost my younger sister 13 years ago (from a medical situation), but it seems like only yesterday.

Hope you grew out of your shyness.

Sorry you lost your sister. Losing a sibling is so difficult. {{{Hugs}}}

What a wonderful story. I'm sure there's at least one Chicken Soup for the Soul anthology that would love this.