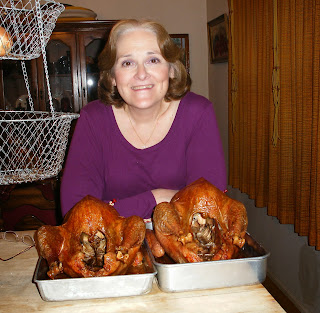 That's me on Thanksgiving 2010 with the two turkeys I roasted in the oven for the usual crowd. The oven died afterwards. It roasted those two turkeys with its last gasp.

When I was growing up in Cliffwood Beach, my mother went all out for Thanksgiving. She missed her family out in western Pennsylvania on holidays. There was one Thanksgiving when Dad drove us all out in a snowstorm to see my grandparents in Canonsburg, PA. On our arrival, my grandfather told us we were crazy. 😉

Most of the time, Mom cooked the special feast just for six--my father, my sisters, my brother, me and herself. However, there was one memorable Thanksgiving when my brother invited four of his classmates from college to join us. They came from India. One of them was a Muslim, so turkey was fine with him. However, three of them were Hindus and vegetarian. They wound up eating a lot of biscuits.

My mother's preparations for Thanksgiving started off a day ahead when she made three kinds of pies. She made only one mince meat pie for my father, which no one else would eat because nobody else liked mince pie. She also made apple pies and pumpkin pies--all from scratch with her own pie dough. (Rolled pie crusts had not been invented yet.)

My brother, my sisters and I were all Mom's apprentices. Each of us had specific jobs to do. I usually got the job of making the cream sauce for the cauliflower. My brother usually chopped up celery and onions for the stuffing.

Our feast consisted of mashed rutabaga, cauliflower with cream sauce, and onions with cream sauce, too. Having grown up in a house with five brothers, Mom always cooked enough for an army. There was not just the stuffing that went into the turkey, but another pan of stuffing as well. We had corn, sweet potatoes, and mashed potatoes. And biscuits, of course.

It was a lot of work.

Due to COVID-19, this year is very different. We have been trying to stay safe for eight months so hubby and I will be dining alone. We'll be sharing a three pound turkey breast, stuffing, mashed potatoes, cranberry sauce, and a frozen vegetable mix. (I haven't decided which one yet.) I made cookies for dessert. Hubby isn't fond of pumpkin pie, so I figured I wouldn't bother to make one for just me. Not cooking for a crowd is a lot less work.
After we eat, we'll get on Zoom with our gang and chat about what they had to eat. Video chats are not the same as real hugs, but for now that's what we need to do.

That all sounds lovely. Brings back memories of my childhood holiday meals. My mother hated to cook but she did it all the time. Holidays always had turkey, that weird green bean casserole, these sweet potato balls she'd make from canned yams and stuff with a marshmallow and roll in corn flake crumbs--everyone loved them. Lately it's just me here, since my daughter and family are cross country. But one of my cats loves turkey, so I make half breasts all the time for her, even tho I'm not that much a turkey fan. I'll also do roasted glazed sweet potatoes along with roasted apple compote, fresh steamed green beans. I bought some cranberry relish but in days past would make my mother's cranberry mold. So pretty. I might bake some sugar free cookies to share with diabetic ex-son in law when I see him on the weekend. Oh and of course I'll make cornbread suffing, simpler this year than in the past when I added cooked sausage meat, apricots, dates, and the usual onion, celery, red peppers and herbs. Happy Thanksgiving Penny. :)