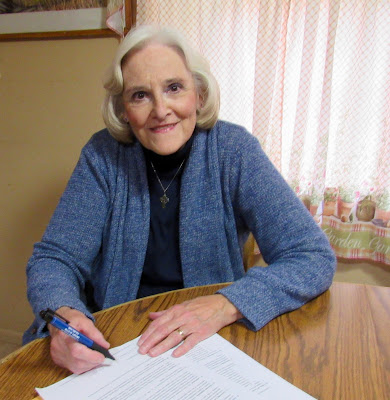 I received a contract from Pelican Book Group for Home Somewhere. I was so delighted I even put on some makeup for this photo to sign the contract. 😄 As you can see, I now have gray hair--though I prefer to call the color Pandemic Blonde.

I don't know when Home Somewhere will be released. There are always several rounds of edits to go through and Pelican Book Group has a schedule for releases. But at some point, I'll let everyone know as the time draws near.

Home Somewhere is a contemporary Christian romance, which begins in New York City and then moves to the Pine Barrens in New Jersey.

Thea Ahern lands a job at a gossip magazine in NYC—a job she desperately needs. When she witnesses a man attack another on the subway, she stops the bleeding on the injured man. Hailed as the Angel of the L Train, people notice her striking resemblance to a once famous actress. This sparks a renewed interest in Paris Hulette and her whereabouts. What happened to the award-winning actress after her husband shot her?

Thea’s coworker, John, shields her from the ensuing media frenzy and she falls for him. But it is John’s boss who orders him to investigate Thea. When the boss is murdered, John is thrust into the spotlight along with Thea and his past is revealed. Can he be forgiven? Can Thea ever trust him again?

I'm sure my editor will work up a better blurb than that, but for now that's the general idea. While it will take a considerable amount of time for the book to be available, I have plenty of other books for folks to read. One of my long-time friends recently read Daddy Wanted and called me to tell me the book could be a Hallmark movie. That was so nice to hear! So, for those of you who are Hallmark movie fans, I would suggest you read Daddy Wanted.

At the moment, I am in the process of reissuing A Rush of Light, which was originally published by Awe-Struck Publishing in 2005. A few paperbacks are still available here and there, but I intend to have a nice, updated cover.

After that, I hope to start working on another book because writing is fun. 😁