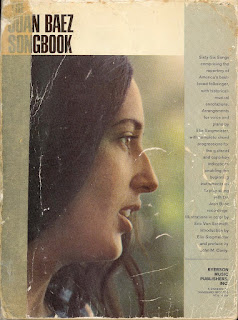 This sad-looking, beat-up songbook has been with me for a long time. I bought it while I was in college. It was a great extravagance at the time, but folk songs were very popular then and I loved them.

I sang "Where Have All the Flowers Gone" and strummed along on the guitar. "The Tramp on the Street," "We Shall Overcome," and "Amazing Grace" were other favorites.

The Civil Rights movement was in full-swing and anti-Vietnam War fervor was at its height during my college years. I was not a protester. I had enough to do with commuting to college and studying. In addition, my brother was headed for the Air Force and I had a penpal in Vietnam.

Nevertheless, I believed in the message of all the peace songs--and still do for that matter.

The penpal abruptly stopped writing. My brother died when his plane crashed. I could not sing "Where Have All the Flowers Gone" for a long, long time.

Ultimately, my grief diminished. The war ended. I was able to sing again. I got a job and bought more music books--which contained more folk songs. I got married and gave birth to three daughters. I started singing my folk songs to them. When we went camping, we packed the guitar into the car and brought it out to sing folk songs around the campfire.

I've been singing the same songs for forty-five years--but so has Joan Baez.

The old songs are the best songs.

We have a copy of that songbook.
My brother and the man who became my husband did come back from Vietnam, but so many didn't.
Does each generation have to suffer this way?
Where have all the flowers gone? Gone to soldiers, every one.
When will they EVER learn?

What happened to all the people who protested against the Vietnam War?

War is such a terrible waste of human life. :^(