Even Blizzards Are Human 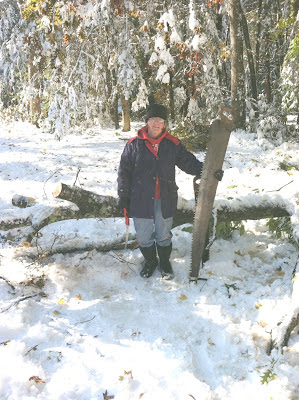 Last October, an unusual early snowstorm crippled part of the nation. The photo above shows my northern sister with an old-fashioned two-handled saw. She and her husband had to use it to get rid of the tree that fell on their driveway. They had an electric chain saw, but no power. In fact, they had no power for eight days--an event my sister refers to as Snotober, but some folks called it Snowmaggeddon.

Hurricanes have been named for decades, but now blizzards will have names, too, according to USA Today. The Weather Channel will be using classic Greek or Roman names for this year's blizzards.

Yes, humans like to names things. They could simply attribute numbers to storms, but people have a crazy tendency to attribute human personalities to everything. There's a long word for this--anthropomorphize.

According to the Merriam-Webster Dictionary it means:

: to attribute human form or personality to

: to attribute human form or personality to things not human

As an author, I name the imaginary people I invent for my stories--and I give them personalities, too. This is not so crazy when you look at the fact that meteorologists are now going to give blizzards names.

As the article in USA Today states, it could make for great headlines.

I wonder how they will define a "blizzard." In my mind, any time we get two inches of snow and people drive like they've never seen it before (and I live in Cleveland, so we have) that would be a blizzard.

The snowstorm last October was not technically a blizzard, but it caused widespread destruction. Maybe any storm that wreaks havoc in terms of massive power outages should be called a blizzard.

I hadn't heard they were going to start naming blizzards... can't wait to see...

The main problem with the storm last year was due to the leaves still being on the trees and the snow was wet and heavy. I think we will have a few major storms this winter in Jersey. I am not a weather person but that is my feeling.

If we all went out and bought big superduper, two-stage snowthrowers with headlights it would be a guarantee that we would get very little snow.

Anyone want to test out my theory?