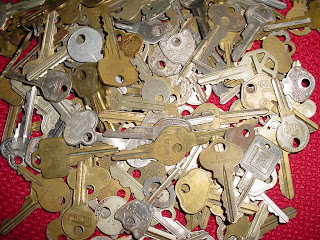 When I was cleaning out my parents house to sell it back in 2011, I found these keys in my parents' basement in an old coffee can. Obviously, my father and mother saved every key they ever owned. There were keys from cars that had long since rusted away. There were keys from houses they moved out of. I was amazed at the collection because hubby and I toss keys into the trash whenever they are no longer of any use. But my parents had enough keys to melt down and make a large ingot. Some of the keys are quite lovely. In the not-so-distant past, most tools had some sort of decoration. Today, utilitarian objects are often sleek and boring. Car keys have evolved into amazing electronic gadgets, and there are plastic cards to open hotel rooms.

I like the old keys. I kept them, in the same coffee can, but now they reside in my basement. Sometimes, I take out the can and reminisce about the cars we drove and the suitcases we carried.
Someday there won't be any keys at all.

I have a bag of keys in one of my desk drawers. Have no idea what most of them go to but can't seem to part with them.
Any time we need another key for various doors in the house I buy a new one.
Enjoy your reminisces!

Sounds like the start of a story to me!

We rarely buy new keys--unless we get a new lock. Enjoy your collection. :-)

LOL! I could write an entire series with one large can of keys, passed down through generations. What an epic! :-)

Yes, the general rule with keys is, the older the better!