Off to England--In a Book 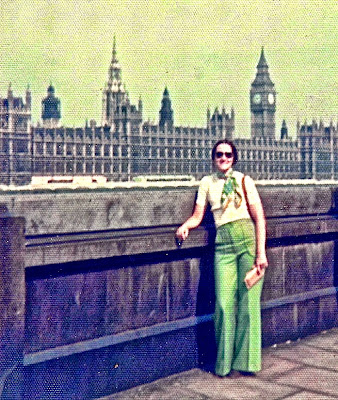 That's me. I went to England and Scotland many, many years ago. My friend, Liz, went with me. It was a two week tour--one week in London and one week in Scotland. Obviously, Liz took this photo. It was fuzzy. I tried to fix it. :-(

I enjoyed visiting England and Scotland. Everybody spoke the same language--sort of. I drove a little Hillman Avenger all over Scotland--quickly adapting to being on the left side of the road instead of the right. I wish I could have stayed longer. I came home with a tea set and little English teaspoons (so cute and small!).

I decided to write a book so I could take myself back to England for an extended stay. Yesterday, I signed a contract with Prism Book Group for PATRIOT'S PRIDE. The story is the sequel to PATRIOT'S HEART. While Patriot's Heart was Agnes's story and set in New Jersey during the Revolutionary War, Patriot's Pride is about her sister, Margaret. She sails off to England after her grandfather has passed away. It's an exciting voyage and one you won't want to miss, especially if you read Patriot's Heart. :-)

I hope you'll save room in your Kindle for Patriot's Pride!

Very cool! I can't believe you drove on the wrong side of the road without incident! Good to know who I can ask to drive me around if I ever get back there. And the story sounds great so far!

Fortunately for me, I had learned how to drive a stick shift because the Hillman Avenger had a stick shift. My friend did not know how to shift gears and so I wound up doing all the driving--but it was great. There seemed to be a castle on every corner. Some were nothing more than a pile of stones, but what an adventure. :-)

My book list is getting backed up again. I need to get on it.

Too many books, too little time. Sigh.

Pleased to hear you had a great time over here! LOL we drive with the gears every day! Looking forward to the book

I enjoyed shifting gears on the car--until I got older. Now I like automatic everything. :-)