A Kiss--from A RUSH OF LIGHT 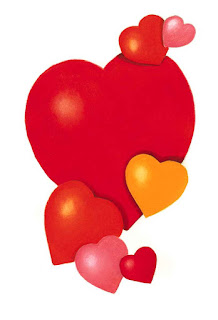 
Here's a very sweet kiss for you from A RUSH OF LIGHT, another one of my inspirational romances. I hope you enjoy it and I hope your Valentine's Day is filled with warmth and happy memories.


He swallowed and stared at the leaf-strewn earth beneath
his feet. All this time he had hoped to change her attitude
concerning faith, but now ... What was he going to do? Lord, I
did not intend to get involved with her.


But you love her.

Uncle Pete's words came back to him.


She glanced up at him and he caught a glimpse of
something almost wistful shining in her eyes. He felt
powerless against that look as another surge of longing set
his heart thundering.


Her hand reached up to touch the place where the dimple
usually appeared in his cheek. "You do care about me. At
least, a little?"


Spring would blossom in a few days, but Nick felt it in his
heart right there. He tripped over his words, "O-of course I
do." Flustered by his own incoherence, he pulled her close
again and their hearts beat together.


A dreadful ache grew in his throat. He was falling in
love with her, and it scared him half to death.


A tremulous smile lifted the corners of her mouth. "When
we danced last night, it was awesome."


When we kiss, it's spectacular. He could not stop himself.
He leaned forward to brush her lips with his. He felt her
stiffen for a moment and fear shot through him, but as his
touch came upon her he found the soft warmth of her breath
welcoming him.


With a delicate intimacy, his mouth covered hers and he
sank into the slow sweetness of her. He had dreamed of her
kisses and had hungered for more of them, but he now found
himself filled with an emotion that left him nearly breathless.


The loud blast of a horn separated them.


"Oh, it's the tow truck." The blush had returned to her
cheeks and her lips reminded him of Aunt Bella's favorite
roses.


Nick glanced at the tow truck and then back at Callie. Lord,
I need some strength to keep from—from doing anything
foolish with this woman. Please.


"You shouldn't tease me." The uncertainly in her eyes
troubled him.


He thought his heart might jump out of his chest.


She flinched at the noise and lifted her hand to her mouth
to start nibbling on her fingertips.


Nick saw one of the troopers walking toward them. Finally
he found his voice and blurted out, "Is he going to arrest
me?"


She shrugged. "Be very polite." Her breath had a ragged
catch to it.


"Well, it's really crazy isn't it?" Her tense laugh didn't fool
him.


At that point, the trooper approached and handed him a
ticket.


The trooper shook his head. "The tow truck operator
doesn't have all day."


"I know." Nick shrugged. All I want to do is spend more
and more time with Callie. Lord, help me!


FIND A RUSH OF LIGHT AT AMAZON! CLICK HERE! 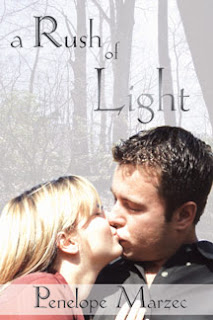 I love this. Beautifully crafted Penelope.

Hope your Valentine's Day is a good one. Did you buy flowers and chocolate for your wife? :^)

Daughter #2 put that cover together for me. I'll let her know you liked it. :^)

I love reading your kiss scenes!

Thanks. Kiss scenes are challenging to write, but so much fun! :-)