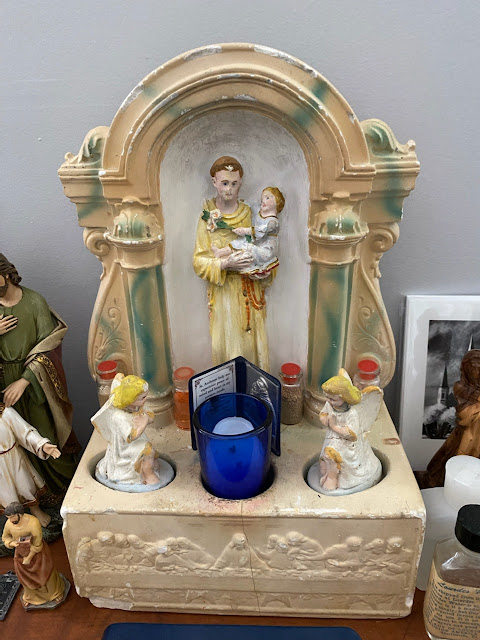 There are a few miracles in my family’s history. There have been tragedies, too, as in most families, but the miracle stories I was told from the time I was young are the stuff that formed my faith and continue to sustain it even through the difficult times. Of course, miracles are problematic when it comes to proving them. However, this particular miracle has a visible, solid object that came along with it, a small home altar of St. Anthony, complete with praying angels, a votive candle, and a bas relief depiction of the Last Supper.

I realize that there are several religions that frown upon praying to saints. For the record, Catholics don’t pray to the saints, we ask for their intercession. Personally, I think of it as asking someone to put in a good word for me. If you want a full explanation you can go to https://en.wikipedia.org/wiki/Intercession_of_saints

My mother’s miracle came about due to the housing shortage after World War II. My parents, my brother and I were living in a roach infested apartment above a bar. My mother, who grew up on a farm in Pennsylvania never met a roach until she came to NJ. Not only did the apartment have roaches, she said you could see daylight between the wainscoting.

But searching for another apartment was discouraging. Every time she saw an ad for an apartment, she would call up to find it was already taken. One day, a woman came to the apartment selling subscriptions for St. Anthony’s Messenger. My parents didn’t have much money and my mother could not afford a subscription to the magazine. Nevertheless, the saleswoman was very kind and prayed with my mother to ask St. Anthony for his help in getting a decent apartment for our little family.

Not long after that, my mother saw another ad in the newspaper for an apartment in a nice section of Jersey City. She told my father about the ad, but he sighed and suggested that she forget about checking the apartment because it would most likely be gone by the time she arrived at the place.

My mother was desperate enough to ignore his suggestion. She bundled me and my brother into coats and made the trek to Jewett Avenue in Jersey City. The apartment was on the first floor of a two-family house. The woman who owned it lived upstairs. The apartment was still available.

My mother toured the apartment as the owner explained that her mother had lived in the apartment but her mother had passed away. There was a good-sized living room facing the street, a dining room, two bedrooms, one large bathroom, and a kitchen. When my mother stepped into the kitchen, she saw the small altar of St. Anthony above the stove. She asked the owner about it. As it turns out, the owner’s mother had a life-long devotion to St, Anthony.

My mother got the apartment.The owner told my mother she was welcome to keep the little altar, too. My mother’s prayer was answered!

While we were living there, I started kindergarten and my brother went to first grade. We both got the measles and chicken pox, but we had lots of other children to play with, which was far better than living with roaches above a bar.

My mother gave birth to another daughter and my parents decided it would be nice to have more room for their growing family. My father found a home in Cliffwood Beach. It was actually the shell of a home. He had to put in walls, but the price was right.

We left Jersey City, but the little altar moved with us to Cliffwood Beach. Another sister came along. My mother often lit the votive candle and prayed through all the tough times. After my mother died and my father moved to be closer to me, my youngest sister became the owner of the little altar. She still uses it today

The statue is worn and cracked. The figures have been touched up with paint, but to my mother this little altar was a sign that someone was really listening. And so, I never doubt. Prayers are always heard. We may not get the answers we want, but it doesn’t hurt to ask someone to put in a good word for you. 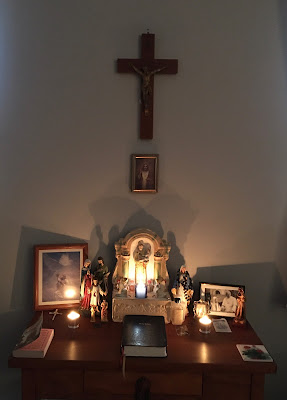