My Birthday Card for Bruce Springsteen 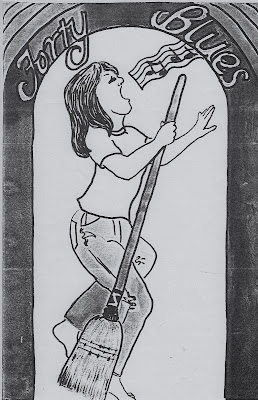 This is a photocopy of a card I made for Bruce Springsteen's fortieth birthday. The local newspaper ran a contest and I entered it. I wrote a poem inside the card, which I neatly lettered by hand in calligraphy. My friend, a former music teacher, collaborated with me and set the poem to music. She recorded it on an audio tape. We sent the card and the tape to the newspaper. We didn't win, probably because the poem was so corny and dreadful, which is why I'm not including it in this post.

The front of the card is supposed to be me, the forty-year old housewife, cleaning while singing Bruce's songs. I was born five days after Bruce Springsteen--so we are almost the same age. I've never been to one of his concerts, though my youngest sister had been to one.

My son-in-law-to-be gave me Bruce Springsteen's autobiogaphy, Born to Run, for my birthday at my daughter's suggestions. (He's very smart!) It's not autographed, but that's fine with me. I haven't finished reading the book as yet, but I am enjoying it. There are plenty of interesting details and I can relate to them. Bruce grew up in Freehold, I grew up in Cliffwood Beach, about fifteen miles away. The atmosphere was similar. The times were the same, though my circumstances as a child were different.

NPR's Fresh Air interviewed Bruce Springsteen. You can listen to the interview HERE. However, if you grew up in New Jersey in the same era, you should read the book. :-)
Posted by Penelope Marzec at 10/07/2016 09:57:00 AM

Fun post, Penelope! I am also a huge Bruce fan. I got to attend a concert in April--definitely one of the highlights of my life. And I'm going to buy the book and companion CD this afternoon! :-)

The book is so interesting. Bruce writes about all the places in Monmouth County I know so well. I didn't realize there was a companion CD until a few days ago. I'll have to get it, too.